Hyundai's ix20 doesn't look like any kind of people carrier but it was designed to compete against Nissan Notes and Citroen C3 Picassos in the growing supermini-MPV segment. And compete in such a way as to offer the kind of design flair, sound engineering, build quality and value proposition that would leave rivals looking square, utilitarian and out of touch. On the used car market, there are plenty of people shopping for this small but very clever class of car. The ix20 aims to be the smartest and most sought after of them all.

Why don't people buy more supermini-MPVs? For those who've owned or tried one, it's a puzzle. Though a growing used car market niche, this is still a marginal one that's usually forgotten in people's stampede to buy Fiestas, Corsas and Clios. Yet if you took such a customer and set them inside something like this Hyundai ix20, they'd be pleasantly surprised. For the same kind of money, you get more space, flexibility, value - even arguably better looks. Supermini-MPVs like this make sense. This ix20 was launched in 2010, then lightly facelifted in 2014. Under the skin, it was identical to a Kia Venga, an identically-targeted model that rolled down the same Czech Republic production line. Both cars were carefully tailored for European tastes, but it was the ix20 that claimed to offer better value. A great used car alternative then, to established players in this sector like Nissan's Note and Citroen's C3 Picasso. Have they much to fear? Let's find out.

Early supermini-MPV designs look very boxy alongside this Hyundai. Come to think of it, so do some of the more recent ones. The German design team behind both this car and its Kia Venga cousin decided that such squareness was making supermini people squeamish, creating a boxy persona that made the jump from supermini to supermini-MPV motoring too great a one for mainstream customers to contemplate. So with the ix20, you get curvy looks that are part of a design language the stylists rather pretentiously referred to as 'fluidic sculpture'. You'd expect a practical downside though wouldn't you? 'Fluidic' curves are never going to hold as much as a squared-off box. Or are they? Lift the tailgate and with 440-litres of space on offer, there's almost twice as much space as you'll find in, say, a rival MK1 model Nissan Note. Citroen's equally angular C3 Picasso can't match it either, nor can this French challenger offer significantly more than the 1486-litres of space provided when you fold the ix20's split-folding rear backrest forward, a motion that moves the cushion forward and down at the same time, resulting in a perfectly flat load space ideal for swallowing big boxes. Bigger, certainly, than could be accommodated by a comparably-priced Hyundai i30 Estate from this era and, perhaps more surprisingly, also a 10% improvement over the figure on offer from the supposedly identical Kia Venga - this ix20's sister design. A neat feature is the adjustable boot floor which can be set at sill-level to make it easier to slide luggage in, or you can lower the thing down to accommodate taller items. Oh and we rather like the 'secret' storage compartment under the boot floor for hiding valuables. At the wheel, it's nicer than you might be expecting, bold in its design and well assembled from quality materials. There are leather coverings for the steering wheel rim and gearknob, a nice fold-up driver's armrest, smart gloss black and alloy-effect trim on the centre console and door inserts and a surprisingly convincing chrome-effect finish on the door handles. It all confounds the expectations prompted by the asking price and gives the interior a remarkably up-market ambience. OK, some of the plastics aren't quite as classy as those you'll find in some rival VW Group cars, but they certainly look and feel sturdy enough to take on a young family armed with the contents of a Happy Meal box. And as with the exterior, inside the cabin Hyundai's designers weren't afraid to express themselves artistically. The speaker grilles and the seat pattern on this model for example, echo the leaf-inspired design of the front grille. Such attention to detail continues in the back seat, where the accommodation on offer is not only thoughtfully laid-out but also remarkably spacious and practical for a car measuring only just over 4-metres in length. Hyundai reckoned that, thanks to sliding rear seats, you'll find more rear cabin space in here than in the back of a Land Rover Discovery-sized Volvo XC90. All right, these seats might not be as comfortable as the Volvo's but head and legroom are ample and the completely flat floor frees up extra space for feet. 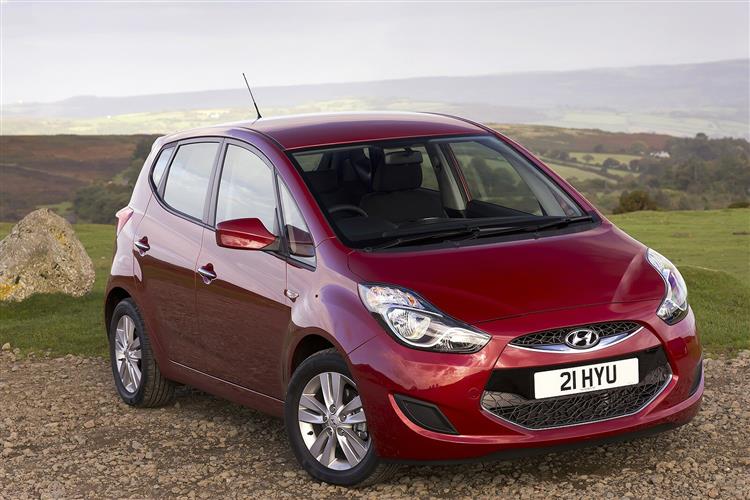