If you're looking for a practical, spacious five-seat family hatch with a bit of SUV attitude and a touch of extra off-tarmac capability, the obvious solution is to opt for one of the market's popular Qashqai-class Crossover models. But if you're looking for a used car from the 2013 to 2016 era, there is another option. Renault's Scenic XMOD may be first and foremost a compact MPV but mud and snow tyres and a clever Grip Xtend traction system actually give it more capability than most front-driven Crossovers and small SUVs. And its People Carrying roots mean greater interior flexibility too.

We're going to start by talking Crossovers. You know, those SUV-style Qashqai-class family hatchbacks on steroids that so many people seem to want these days. This Renault Scenic XMOD isn't officially one of those. But it clearly would like to be. Renault, of course, knows plenty about Crossovers and back in 2013, was already selling one purpose-designed such car, the Clio-based Captur. What the brand didn't have back then was a larger Qashqai-sized Crossover contender - the company's Kadjar model wasn't launched until the Autumn of 2015. To fill the gap in its range prior to the Kadjar's arrival, Renault decided to offer the five-seat version of its Scenic MPV with an electronic grip enhancement system, some grippier tyres and a few SUV styling cues. The resulting package was rather curiously badged 'XMOD' and it was available to all buyers of the revised third generation Scenic model sold between 2013 and 2016. Yes, this is really a People Carrier in a pair of hiking boots, but that's not necessarily a bad thing. True, it doesn't have 4WD - but then most Crossovers don't offer that either. Plus this more adventurous Scenic delivers levels of space, practicality and seating flexibility that most comparably priced Crossover models can only dream about. If you like the look and don't mind the People Carrying heritage of this car, you could conceivably find it all quite tempting. It's certainly a recipe that Renault had plenty of time to perfect: the brand has, after all, been offering us adventurous Scenic variants like this one since the turn of the century. So should family folk give this car a second glance on the used car market? Let's find out.

What You Getword count: 832

Go for the XMOD version of this Scenic and you get chunkier bumpers with silver skid plate-style inserts front and rear, special wheels, sill guards and chrome-finished roofbars. Otherwise, it's the standard MK3 model Scenic aesthetic recipe, which means that this five-seat model gets what Renault calls its 'flame-effect' line, a crease that starts beneath the headlights then sweeps rearward, further emphasising the plunging roofline. At the wheel, the large wide windscreen makes the cabin feel spacious and airy - even more so if you've found a variant fitted with the optional huge panoramic glass sunroof. Plus the driving position offers loads of adjustment, with a seat that can be jacked so high that even the shortest driver gets a commanding view. The soft-touch sweeping dashboard design shows how far Renault has come in recent times in its pursuit of perceived quality and there are some very classy touches like the full colour TFT display that you can tweak to your own colour choice. Many models were originally specified with a useful extra mirror to allow the driver to more easily keep an eye on kids in the back. To keep them all quiet, there are three 12-volt power sockets around the interior so that games consoles and MP3 players can be topped up. The dash is dominated by the smart R-Link Multimedia system with its 7-inch colour touchscreen and TomTom sat nav set-up. You'll need to pay an ongoing 'Live services' subscription to fully use everything that R-Link has to offer but once you have, through the touchscreen, you'll be able to access the Renault R-Link Store for viewing or downloading specialist apps for everything from tweeting to games. With the right app added, you can also search Yellow Pages, check your emails, use a Text to Speech function and check out the local weather. Move into the second row and you'll start to appreciate the main benefit of buying a five-seat MPV rather than the Qashqai-class Crosover model you could have had for the same sort of money. That kind of car would give you the same sort of basic rear bench you'd get on any Focus-style family hatchback, perching the unfortunate middle rear passenger on some hard and narrow piece of bulging foam with legs astride a central transmission tunnel. In contrast, here you get a far more flexible arrangement with three individual seats that separately recline and slide backwards and forwards so that either legroom or rear luggage space can be prioritised. They fold too of course, which means that if you're only carrying a couple of rear passengers, the middle chair can function as a table for the two outer folk. Options you'll find fitted to many models include aircraft-style fold-out tables, seat back storage pockets, retractable rear side window sun blinds, dark tinted rear windows and the huge optional panoramic glass roof we mentioned earlier. You further appreciate the flexibility of the rear seats when it comes to the question of luggage space. There's 437-litres with them pushed right back, but you can increase that incrementally by individually pushing the chairs forward and freeing up as much as 555-litres whilst still carry five people. Or of course, if the seats aren't needed, you can simply individually fold them: or tumble them forward. In 'tumbled forward' mode, you free up 1,837-litres of total fresh air, a figures just 317-litres less than you'd get with the same configuration selected in the seven-seat Grand Scenic model. In context, that's 317-litres more than you'd get in a rival Volkswagen Golf SV and only just short of what's on offer in the class-leading Citroen C4 Picasso. Need more? Then if you've got yourself a model that was fitted with the optional fold-flat front passenger seat, pushing it forward will free up space for really long items like surfboards or mountain bikes. If this still isn't enough to take the load you have in mind, you can take the seats out completely, though even if you've got somewhere to put the things, the procedure is so complicated and awkward that you'll be finding excuses not to do it. Rivals with seat systems folding flat into the floor do it better. But then, the seats-folded 1837-litre capacity is probably about as much as most families will ever need and this Scenic builds on that with a further 86-litres of interior oddment space. Under-floor compartments, under-seat drawers, a huge chilled glovebox, centre console cubbies, door pockets and trays on the seat backs should help to keep the family's paraphernalia in check. We also like the way that the centre storage unit between the front seats slides forward so that it doesn't get in the way if you've pushed the middle rear seat right forward, as you might do to keep a better eye on a child in a booster seat. Overall then, if you don't need seven seats, there's probably enough flexibility here to justify this Scenic's premium over a conventional Megane-sized family hatch. 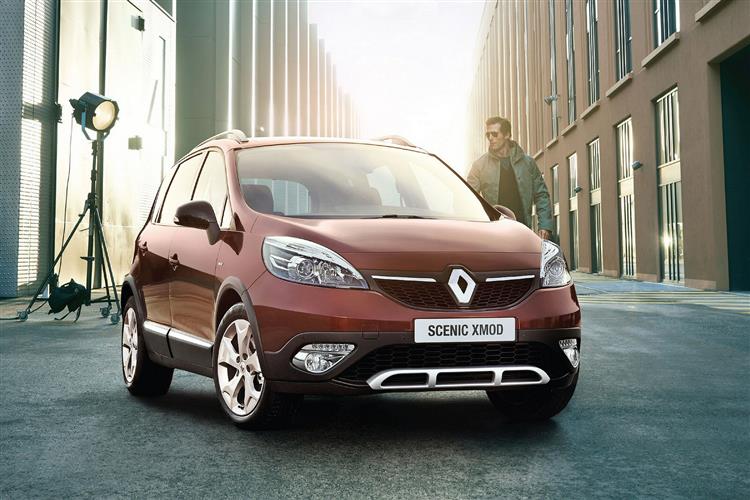