MAKE MINE A MOKKA? (some text hidden)

Small Crossovers should be fun and fashionable, but that doesn't mean they can't also be versatile, capable and practical too. Like Vauxhall's little Mokka? Perhaps. Let's check it out as a used buy.

The Mokka was first launched in 2012 to represent the Griffin brand in the growing small Crossover market. The idea was to offer a trendy and relatively affordable way for a small, fashionable family to get a foothold in this segment. It was aimed directly at the one hugely popular rival that back in 2012 had really shaken up this sector of the market - Nissan's trendy little Juke. Wild and wacky, the Juke had bought a super-sized serving of attitude to this conservatively-styled sector. But not everyone liked its wilfully outlandish looks or its cramped rear cabin. So this Mokka took it on with a slightly more spacious supermini floorplan and fashionable cheekiness designed for wider appeal. It was a package also created to perfectly position Vauxhall against other direct segment contenders like the MINI Countryman and the Ford EcoSport. Most potential Mokka buyers wanted a diesel; the car was launched with one of Vauxhall's older CDTi units, a 128PS powerplant. In 2015, this was replaced by a quieter, more efficient 134PS 1.6 CDTi unit. In the Autumn of 2016, the original Mokka range was replaced by the Mokka X line-up, which featured a light re-style, a more powerful 1.4-litre petrol turbo engine option and an upgraded Intellilink infotainment system.

What You Getword count: 659

When it comes to the size of their products, Vauxhall designers like to blur market segment boundaries - and have done so again right here. So just as Vauxhall's compact Meriva MPV is neither tiny (think Nissan Note) or family hatchback-formed (think Renault Scenic) but shaped somewhere between the two, so this Mokka also sets its own course amongst small Crossovers. Though supermini-based, like a Nissan Juke, it's nearly as big inside as a family hatch-style Crossover like Nissan's Qashqai. But whatever your thoughts about this car's size, you'll probably agree that the way this Mokka looks will go a long way towards selling it. Cute and individualistic without being wilfully outlandish in the manner of a rival Nissan Juke. And better resolved than the rather awkward-looking MINI Countryman. The front, which features a neatly tailored chrome bar with the Vauxhall Griffin badge at its centre, was an area the designers worked hard on, the priority being to create a solid, masculine feel, even though Vauxhall is well aware that the likely clientele for this car will be very much female-orientated. Sure enough, the Mokka has a look that'll have wider appeal across both sexes, with purposeful protective cladding around the bumpers and wheelarches. And nice touches like Vauxhall's signature 'blade' light-catching line on the body side, sweeping up towards the rear where you'll find a skid plate with a polished aluminium finish and a rear window that's been combined with a roof spoiler and distinctly shaped tail lights. Under the skin are the underpinnings of a supermini - more specifically, the old Chevrolet Aveo. In the back, the rear seats benefit from wide opening doors that simplify the fitment of a child seat, though that sharply rising waistline might restrict the view out for smaller occupants. Once inside, there's more space than you'd perhaps expect from something based on a car from the Fiesta class, especially when it comes to headroom. True, if you fold up the cleverly concealed armrest with its integral cupholder and attempt to seat three adults across this rear bench, things would be a little tight, but no more so than in any ordinary Focus or Astra-sized family hatch. As for luggage room, well, there's no high boot lip to negotiate and beyond it lies 356-litres of carriage space - about the same as you'd get in a MINI Countryman but 30% more than you'd get in a Nissan Juke. Push forward the split-folding rear bench and the Mokka really is spacious, offering around 1.5m of loadbay length and a total capacity of 1,372-litres. To put that into perspective, you get 1170-litres in a MINI Countryman, just 860-litres available in a supposedly larger Nissan Qashqai and just 550-litres in a Nissan Juke. And at the wheel? Well forward visibility is great thanks to that high-set SUV-style driving position. Over-the-shoulder visibility isn't quite so good though, due both to thick rear pillars and side windows that rise towards the rear of the car. As for the cabin aesthetics, well, despite the appearance of Vauxhall's signature wing-shaped instrument panel that wraps around the door inserts, the interior isn't overly adventurous, most of the instruments and switchgear is lifted from the brand's more conventional models, which means that some of it isn't that intuitive to use until you get familiar with things. Still, this car's more conservative vibe might just mean it mops up sales from people left a bit cold by the sheer extravagance of the Nissan Juke. Splashes of chrome around the centre console are supposed to suggest a 'premium' feel and build quality from the Korean factory seems good. The real emphasis though, is on practicality, with no fewer than 19 storage areas dotted around the cabin, including cubbies in front of and behind the gearlever, two gloveboxes and a lidded compartment to the right of the steering wheel. Most models also get a 230V three-pin mains power supply - ideal for game-minded kids. 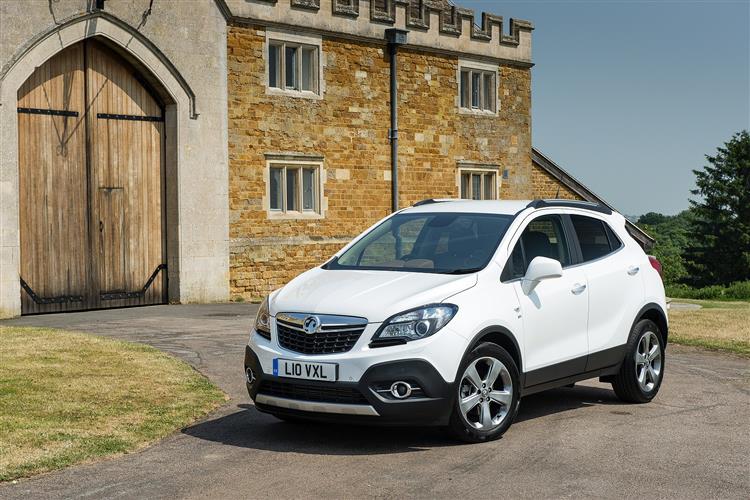