THE FRENCH OPEN (some text hidden)

Renault's glass-roofed MK2 model Megane CC tried to bring a fresh level of elegance to the affordable folding hard-top convertible market during its sales life between 2010 and 2016. It makes an interesting used car buy if you're after a stylish, affordable drop-top.

You've heard of convertibles with fabric roofs and metal roofs? Well here's one with a glass roof. Renault wanted its second generation Megane Coupe-Cabriolet, launched in 2010, to establish a clear lead over rivals at the relatively affordable end of the drop-top market. With that in mind, they tried with this design to minimise the usual compromises associated with compact open-top cars sporting four seats, paying particular attention to practicality, driving dynamics and integrating a bulky roof mechanism without sabotaging the styling. A difficult task. But not an impossible one and Renault, with a history of small, inexpensive cabriolets that stretches back to their pretty Floride model of the Fifties, thought themselves well placed to pull it off. This Megane was targeted at hatch-based rival cabriolets like Volkswagen's Eos and Peugeot's 308CC and aimed to suit style-seekers who, the French brand hoped, would appreciate the car's glassy, airy design in enough numbers to make it a class leader. Unfortunately, sales were relatively slow and the car was finally withdrawn from the UK market in early 2016.

What You Getword count: 582

This is a slightly bigger car than its Megane Cabrio predecessor, 125mm longer with a wider track, large headlights and wrap-over taillights aiming to partly disguise its bulk. Whether it's also more stylish is a subjective call: it certainly looks more premium, thanks in part to the satin chrome surround of the windscreen and the gloss black roof pillars. But this is a convertible, so we should concentrate on the roof. Some hard-top coupe-cabriolets use their styling to disguise the fact that the roof is removable when the top is in place. This Megane isn't one of those, intentionally looking like an open topped-car whether the hood is up or down. When raised, the two-piece glass roof forms a bubble over the cabin, justifying the 110kg weight of its assembly by bringing extra illumination and an airy feel to the interior. And to allay worries that the glass roof will create a greenhouse of your car's cabin on hot days, Renault have provided a retractable sunblind for when the sun gets too oppressive. At the touch of a button (which unfortunately only works when the car is stationary), the roof breaks apart and begins its balletic descent into the confines of the boot. 23 seconds later, the Megane CC is an elegantly proportioned convertible. The windscreen structure has been moved slightly forward to maximise cabin space and aid access through the car's two doors, though it's still possible to bang your head on the two thick A-pillars if you're not careful getting in and out. They can slightly get in the way of your visibility at some junctions too. The windscreen design is also intended to work in conjunction with the fixed glass wind deflector behind the rear headrests, with the aim of reducing the cabin buffeting at speed that will probably determine how often you'll feel the need to enjoy al fresco motoring. If you're travelling two-up and have ticked the box for the additional folding mesh-type net deflector, then your car will be even more serene on the move. Which'll make you more likely to want to take the top down all the year round - and so justify the premium that this car demands over an equivalent ordinary Megane hatch. Talking of travelling two-up, you probably will be most of the time. An lengthened wheelbase does mean that these two rearmost seats offer more space for adults than you get in some small cabrios, but it would still be stretching things a bit to call this a fully-fledged four-seater. Which means that these two rearmost perches remain probably best left to children, jackets, designer shopping backs or friends particularly desperate for a lift home from the pub. At the wheel, the interior design is basically similar to that of standard Megane hatchback models from this era, with the same classy materials on display. One of the downsides of a folding hard top roof is usually that when you retract the thing, it munches through all your available bootspace. And sure enough, Renault's designers have been unable to defeat the laws of physics in this regard, providing buyers with a restricted 211-litre boot with the hood lowered. Still, all this model's rivals suffer with the same problem and in this Megane, you do at least get a much heftier 417-litres with the top in place. It also helps that access to this luggage area is enhanced both by a wide aperture and a low sill height, 590mm from the ground. 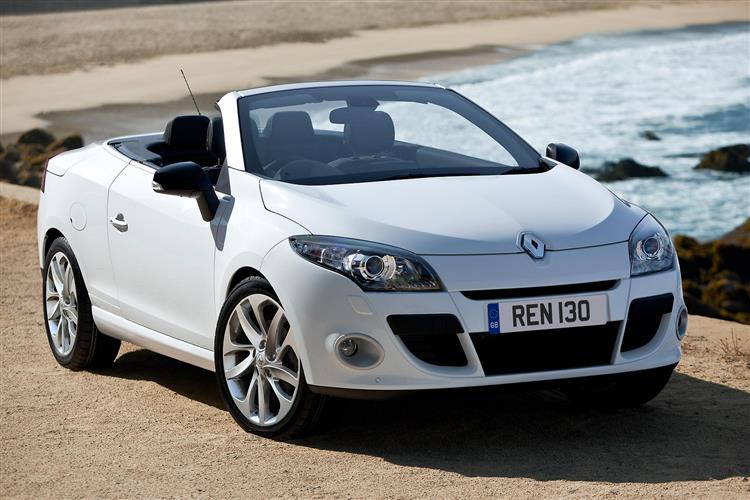