4X4 TO THE POWER OF G (some text hidden)

Some Mercedes models are the epitome of on-road luxury. Others are almost unrivalled for off-road prowess. And then there's one which claims to offer the best of both: the 7-seat SUV that in the 2013 to 2015 period was known as the GL-Class. This is the very few super-luxury SUVs that can seat seven fully-sized adults. And it's the only one that can do so whilst offering a properly dynamic drive on road as well as extreme capability off it. This was the second generation version of the GL-Class model line and it was claimed at launch to be smarter, plusher, more refined and even more appealing, which ought now to make it a very strong used buy. Got a family? You'd like one.

This, if you haven't yet come across it, is a vehicle billed as 'the S-Class of SUVs', a luxury conveyance for those whose real - or more likely imagined - commute to the real world is from a craggy mountaintop. We first saw it in 2007, built in America for Americans and since then occupying super-sized shopping mall spaces from New York to New Orleans in ever-increasing numbers. Over there, it was a necessary addition to the brand's luxury SUV line-up, given that for Yanks, the five-metre-long M-Class from that era was pretty compact and the exorbitantly-priced G-Class was too crude for most. With the GL, the brand had something to take on the all-conquering Range Rover that would offer well-heeled buyers the added benefit of seven seats. It's that third seating row that's always set the GL apart in a luxury 4x4 market that rarely offers this option - or if it does, often restricts practical use of the extra seats to children. Not so here. Hence perhaps, the bigger-than-expected take-up for the first generation version of this car on these shores - a market that most commentators expected would find this model a size or so to big. Though even larger in the guise we're going to look at here - the second generation design launched in mid-2013 - greater familiarity with cars of this size means that it actually doesn't seem quite so huge these days. And the sleeker shape clothes a GL-Class that's cleverer, more comfortable, quieter and more efficient than the original MK1 model. This design sold only until early 2016, when it was replaced by a facelifted version that was re-branded the 'GLS'.

What You Getword count: 764

So, it's big - of course it is, even more so than the car it replaced, which already was large enough to make your neighbours question their right-to-light restrictions. This MK2 model was longer, wider and taller than its predecessor, with more than three metres between its wheels and a total length of nearly 5.2m. So you'll need a very large garage. Having said all that, this is a design that's remarkably effective in concealing its bulk, thanks to sleeker looks and well balanced proportions, with short body overhangs at the front and rear suggestive of off-road prowess. As with the MK1 version, there's a car-like monocoque construction under the skin that in this guise was lighter than before thanks to the use of aluminium in the bonnet and wings, despite which this car is still heavier than a rival Range Rover. The front is dominated by an upright radiator grille with a centrally-mounted three-pointed star and jewel-like hi-tech headlamps showcasing the cleverness of the brand's Intelligent Light System. Follow the rising belt line to the rear, admiring the 21-inch 5-spoke AMG alloys and the aluminium running boards as you go, and you might notice the neat small kink near the C-pillar, one of the things that makes the rear seem a little less bulky. At the back, you'll find two-piece LED tail lamps, a large roof spoiler, a bumper with a modern wing design and an underbody panel with extensive areas of chrome. Right, onto the interior - and we're going to start with the thing that sets this car apart in its segment - the space you'll find at the very back. The fact that it has three seating rows at all is fairly unusual in the super-luxury SUV sector, setting this car apart from, say, the Range Rover or the Porsche Cayenne. And the fact that in that third row, two fully sized adults can be properly accommodated is even more unusual, setting this car apart from slightly smaller rivals like the Range Rover Sport or the Audi Q7. The wide-opening doors ensure easy access and because Mercedes' 'Easy Entry' system allows both left and right hand sides of the second row seating to completely shift forward, access to the very back is easy, particularly if you've specified the motorised Easy Entry package. Once installed at the very back, there's quite as much space as you'd find in any large MPV. If you've owned a MK1 GL-Class or used one, then you'll know that two big burly folk could also fit into the rearmost row of the original version of that car - but you'll also know that they would have struggled for comfort on a longer trip. Thanks to the extra 9mm of headroom and the extra 19mm of elbow room provided in this second generation design, that's here not such an issue. Find yourself in the middle row and there's also a little more head and elbow room than there was with the first generation model, with decent space for three people who can adjust their seats for legroom and backrest angle. And up-front? Well, it's pretty much exactly as you'll find in a Mercedes M-Class luxury SUV from this era, which means that, though very nice indeed, the whole ambience isn't as glamorous as that of a Range Rover or Porsche Cayenne. Still, the brushed aluminium trim is nice and you'll find the stitched Artico artificial leather actually looks quite nice if you're not prepared to push the boat out and pay loads extra for a car that was originally fitted out with the designo nappa leather trim package. Through the four-spoke leather-trimmed multi-function steering wheel, you view two clear round dials separated by a 4.8-inch colour display. While in the centre of the dash, there's the usual large colour display screen for the COMAND infotainment system, operable by a rotary controller positioned where the handbrake would be if it hadn't been replaced by one of those fiddly electric under-dash catches. That leaves luggage space. Lift the huge tailgate and there's actually a reasonable amount - 295-litres - even when you've got all seven seats upright. Use the neat electric folding system to flatten the third row into the floor and that figure increases to 680-litres, pretty much the same as you'd get in an equivalent M-Class. Flatten the second row as well though, and you'll find this GL much bigger than its Mercedes stablemate, offering a huge 2300-litres, about 15% more space than you'd get in, say, a Range Rover or an Audi Q7 from this era. 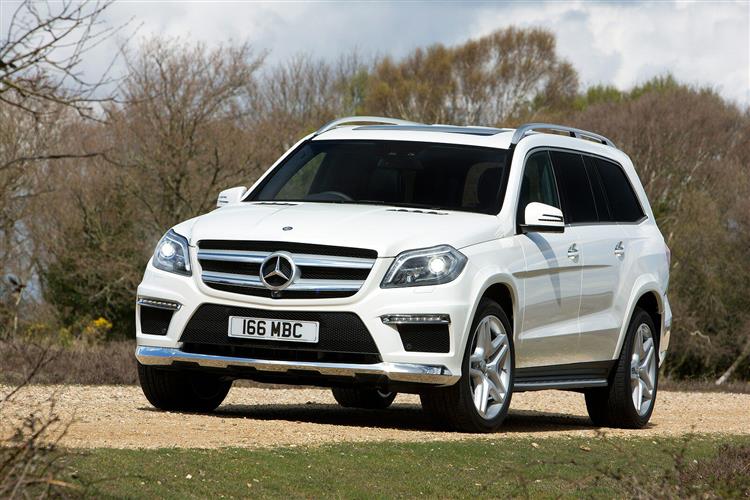