THE RAVS & THE RAV NOTS (some text hidden)

Toyota's RAV4 compact SUV soft roader has been around so long it's easy to forget quite how far it's come. The fourth generation model launched in 2013 was bigger, better finished and far more efficient. Nor did it forget that that cars in this class need to look good and drive well too. It's a sensible used buy, but also one that might throw up a few surprises.

Think of a small, sporty and relatively affordable soft roading SUV and you're probably thinking of this one, Toyota's RAV4. Since this company's Recreational Activity Vehicle was first launched in 1994, it's redefined its market sector, gaining over four and a half million sales worldwide and spawning a whole host of imitators. These days, some of them aren't even proper SUVs, soft or otherwise, with Qashqai-like crossover models an increasingly popular choice amongst families prioritising style over substance. It all required the RAV4 to evolve in the fourth generation version we're going to look at here, a smarter, plusher, bigger and better to drive model that first hit the market here in early 2013. Back in the Nineties, the very first RAV was a kind of hot hatch / SUV with three doors and a size no bigger than a modern supermini. A far cry from the mature, grown-up but dare we say, slightly bland family five-door the car had become by the time of the third generation model's launch in 2006. Toyota couldn't turn the clock right back with this MK4 model but it was determined to inject this fourth generation design with a little more styling and driving sharpness, the things, after all, that people most liked about the original. With these things sorted, so the reasoning went, this car would be as appealing to Qashqai-like Crossover folk as it would be to those considering more traditional soft roading compact 4x4 rivals like Honda's CR-V or Land Rover's Freelander. The MK4 model RAV4 sold in this original form until late 2015, when the range was facelifted, a BMW diesel engine introduced and Hybrid power added to the range for the first time.

What You Getword count: 639

A RAV4 must never be big and bulky. Buyers have always looked at one and thought 'yes I could drive that', 'yes, I could park it' and 'yes, that would look rather nice in the driveway'. So should loyal owners of first, second or third generation models be worried by the apparently far-reaching changes made to this fourth generation version? After all, it's rather differently sized - 205mm longer, 30mm wider and 25 lower than a MK3 variant - and at first glance very different to look at. It all seems to be evidence of quite a lot of work on Toyota's part - until you start to examine the end result and conclude that really, when you get down to it, nothing too radical has gone on here. After all, seen in profile, this car still manages to look compact and wieldy, displaying the same kind of space-efficient packaging, rising belt line and distinctive silhouette that previous owners will instantly recognise. Only when you move to the front are major changes apparent, with Toyota's 'keen look' design language liberally applied across the pointy end. That brought us this car's large, trapezoidal lower grille design, matched by a smaller upper grille that runs the full width between sharp-edged headlamps teamed with integral daytime running lights. Inside, the cabin of this MK4 version features a more stylised feel boasting far better levels of perceived quality. Get in and one of the first things you notice is the curving, metal-finished spar hoop that rises from the transmission tunnel and cuts through the dashboard beams to frame steering wheel, footwell and an instrument binnacle that illuminates with clear blue backlighting. The central part of the dash meanwhile, is built up in layers, with a rather old-fashioned digital display at the top, surrounded by metallic trim, then a clear effective infotainment screen below before you get to a lower beam that forms a sweeping panel around the ventilation controls and is clad in a soft, pleasing leather-like material you'll also find on the upper door panels. It dominates the eye to such an extent that the buttons below - including that for the important 'Sport' button - are rather hidden away. On the plus side, the redesigned driver's seat is more comfortable, has more adjustment and gives you a wide field of view across the bonnet to make parking easier. And in the rear? Well if you're coming to this car after owning the previous third generation version, make sure you take a seat here to experience the differences because they really are significant. An extra 100mm has been added to the wheelbase of this MK4 model and pretty much all of it has been used to benefit back seat occupants who get an extra 40mm of kneeroom and class-leading standards of space from seats that can be independently reclined each side of the 60/40 split-folding divide. As a result, you can stretch out in the back of this car in a way that simply isn't possible in many rivals. This alone will sell this car to many family buyers. And bootspace? Well before we get to that, it's worth pointing out that this MK4 model offered a big change to the way customers could access it. Gone at last was the side-hinged 'fridge-door'-style tailgate arrangement of past RAV4's, to be replaced here by a top-hinged tailgate that was less distinctive but far more user-friendly in tight supermarket carparks. Open it and a big 547-litre loadbay beckons, with a further 100-litres beneath the floor if, rather unwisely, you opt for a variant without a full-sized spare wheel. Use Toyota's Easy Flat system to push forward the seatbacks - they fold almost flat - and you'll free up as much as 1,167-litres - or 1,746-litres, should you feel able to load to the roof. 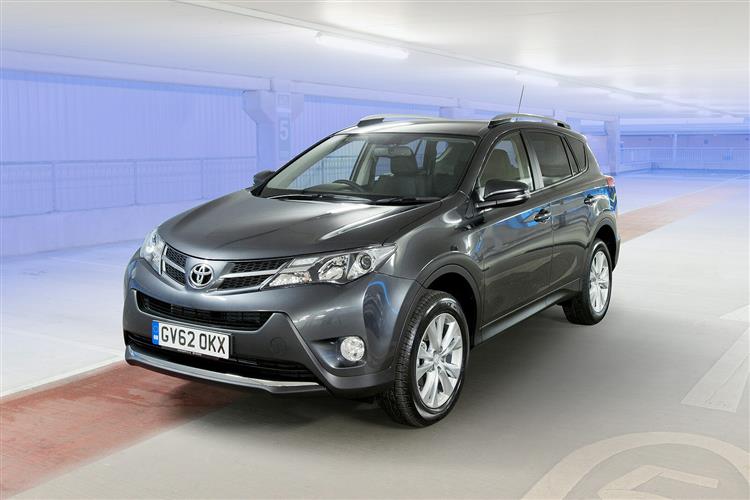