SHARAN AND PACEY (some text hidden)

Families ask a lot of their vehicles but few kinds of car can answer more of those questions than the large MPV. The Sharan is Volkswagen's idea of the ultimate big people carrier, with a variety of seating options and punchy yet economical engines. In 2010, this third generation version introduced sliding side doors to enhance access, plus an increase in size meant that even third row seating could offer buyers adult standards of space, before magically disappearing when not needed. If you're looking for a used large People Carrier from this era, there are more affordable options in this class - but few better ones.

Volkswagen wasn't the first maker to popularise People Carriers across Europe but, along with partner Ford, they were the first, back in the Nineties, to make them palatable. MPVs, it seemed, didn't have to be bus-like. They didn't have to be grudge purchases. Having a family is supposed to be fun. In many respects, owning an original Volkswagen Sharan actually was. But time moves on and so do the needs of People Carrying-people. By 2010, the Sharan was only one of four MPVs the German brand offered and the availability of less expensive Caddy Life and Touran models that also had seven seats had pushed it up-market, making it bigger - and more powerful. All of that had to happen at the same time as the Sharan becoming more efficient and less expensive to run. Not an easy brief to meet, but the result of it was that the third generation version of Volkswagen's defining People Carrier did, once again, become more palatable for fast-moving families. Is it a good used buy? Let's find out.

What You Getword count: 544

This MK3 model Sharan's extra size isn't immediately obvious at first glance, possibly because family front-end styling borrowed from Volkswagen's compact Golf and Polo models offers a feeling that it's smaller than is actually the case. A feeling certainly not supported by the tape measure. A 220mm increase in length means that it's nearly five-metres long, as well as being 92mm wider and 12mm lower than its immediate predecessor. All increases which, as you'll find from a seat inside, have been put to very good use. Especially at the very back. Entry is by sliding doors (so your kids won't re-sculpture the bodywork of adjacent cars any more as they throw themselves out into the supermarket carpark), portals that optionally can be electrically powered. Access to the third row was also made easier in this MK3 model by the Easy Entry function through which the outer seats in the second row tilt and slide forward in a single motion. Once in these rearmost chairs, kids will be delighted to find that they sit a little higher than those ahead, while their parents will discover that this is one of those unusual things: a 7-seater that seven fully-sized adults can actually fit into. Seats like these in compact MPVs and most 4x4s are usually for kids only - or very uncomplaining and agile adults unfamiliar with the offerings of Colonel Saunders. Earlier MK1 and MK2 Sharan models weren't much better either but thanks to its 75mm of extra wheelbase, this MK3 design was able to make a real step forward and the cabin's huge glass area removes the feeling of claustrophobia that you'd normally expect to find. Second row occupants, who can recline their three individual seats for greater comfort on longer journeys and slide them by up to 160mm back and forth as required, are even better looked after, with the option for parents of flip-up booster cushions for use when needed. The problem though, with all these seats in the old MK1 and MK2 Sharan models came when you didn't want them. For the really van-like carrying capacity promised by that boxy shape, you had to lug them out of the vehicle and store them in your garage - hardly ideal. Thanks to the clever EasyFold seating system in this MK3 design, it's all very different. The five rearward seats fold flat into the floor in single easy movements, instantly freeing up an enormous 2,430-litres of cargo space that can be extended still further by folding the front passenger seat flat, allowing nearly three metres of load length. With five seats in use, the boot space is as much as 1,339-litres if you make use of the detachable mesh partition that allows cargo to be stacked to the ceiling. Travel 7-up and of course, it's a total that falls substantially - to 300-litres. Wherever you're seated in this car, head, shoulder and legroom are ample but of course, the most comfortable perch is to be had behind the wheel, where ample adjustability for both seat and steering wheel means that it's easy to find the ideal driving position. As you'd expect from this brand and this pricepoint, it's a classy cabin with lots of soft-touch materials and classy switchgear. What To Look For 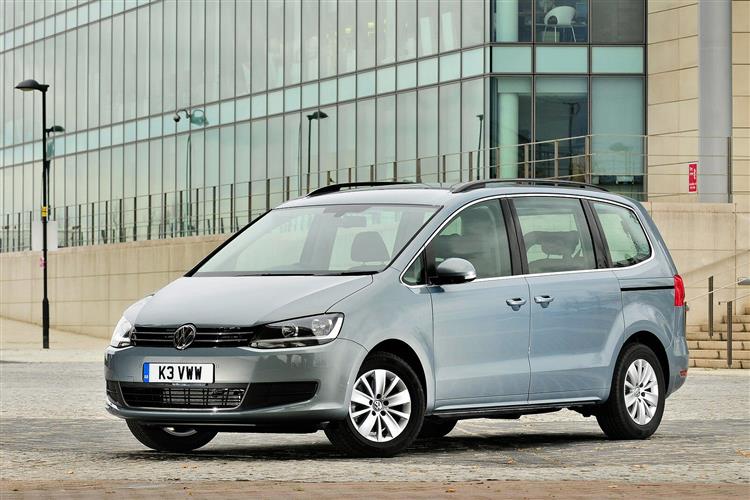