SENSE AND SENSIBILITY (some text hidden)

Toyota's Avensis has always provided customers in the medium range Mondeo segment with a safe, conservative set of wheels. The third generation version continued that tradition when it was first launched in 2008, but it lacked a little in terms of style and technology. Toyota aimed to put that right when the time came for this design's first facelift in 2011 and the changes made were enough to sustain this car until further more far-reaching changes could be made in 2015. So, does an Avensis from this era make secondhand sense? Let's find out.

Toyota has its own idea of what a medium range Mondeo-sized car should be. It isn't shared by most motoring hacks but it is appreciated by business people who spend many miles in the company's Avensis model. For these drivers - and the family buyers like them - cutting edge handling and fancy design are all very nice. But they'd cheerfully swap that final tenth of turn-in and that avant garde dashboard for more practical virtues. Running costs that equal a lower benefit-in-kind tax rating and more in their pay packet. Technology that keeps them in communication on the move and gets them home quicker. These are the people that the third generation Avensis was created for in 2008. They weren't quite satisfied by that car but they responded much better to this facelifted version, first introduced in 2011. It featured greater efficiency, more technology and a smarter look. Just enough to meet the class standard so that there was nothing to distract the attention from the sensible stuff this car has always done so well. It was just enough to keep this Toyota competitive in the face of fine competition from the Mondeos, Insignias and Passats it was up against in the medium range segment and this version of the car sold until a more far-reaching facelift was announced in mid-2015.

The 2011 Avensis facelift introduced Toyota's so-called 'keen look' for this car's front end, supposed to give this model a more dynamic feel. This made this post-2011 Avensis model 15mm longer but the overall effect isn't markedly different from what went before, though park this version alongside the original MK3 design and the changes are clear. At the front, narrower headlamps are fitted with de rigeur daytime running lights and flank a trapezoidal grille that's large and wide with deeper blades. It sits above a sculpted bumper with a protruding centre section housing a large air intake, intended to emphasise the car's wide stance. The effect is to give this car a more assertive look. This post-2011 model also got re-designed alloy wheels and a re-styled rear bumper too - plus revised lamp clusters that incorporate strips of red LEDs. A chrome strip above the licence plate aimed to add a further flash of quality. Nothing too dramatic then, but beautifully understated in a way that doesn't make the look of this car seem re-hashed. And inside? Well, there are plenty of trendier and smarter-looking cabins in this sector, but subject any of them to a couple of hundred thousand miles of hard work and we'd doubt whether any would stand the test of time as well as this one. The team at the British Burnaston factory in Derbyshire have done their work well here. That said, Toyota has recognised the need to add a little extra 'showroom wow' factor, so for this revised model, the appearance, touch and feel of the dashboard were all improved and the layout of the centre console re-designed so that the switchgear is easier to locate and use. If you're familiar with the original post-2008 version of this car, you might notice that the air vents are smarter on this updated model and those parts that are touched most often - the door grips, the switchgear and the front console - all feature higher quality soft-touch detailing. Behind a leather-covered steering wheel that adjusts for both reach and rake, owners of the earlier car might also notice the smarter white instrument backlighting and the more supportive seats. But the main highlight will be the 'Toyota Touch & Go' multimedia system with its 6.1-inch colour touchscreen. At the back, rear seat accommodation is respectable by the standards of the Mondeo class. There are wider cabins in this sector but one of the advantages of this one if you do have to accommodate a third adult across the back seat is that the centre part of the floor is pretty flat, so legroom is not restricted. Out back, there's a 509-litre boot in the saloon variant, extendable by the usual split-folding rear seatback, though when you do push it all forward, it doesn't go quite flat. Of course, if luggage room is going to be an issue, you'll be wanting to consider the Tourer estate version, where there's 543-litres of boot capacity, rising to 1609-litres with the rear seats flat. 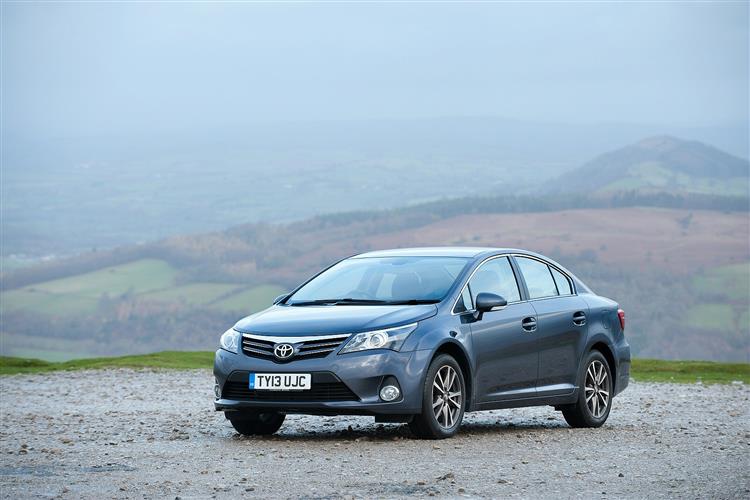