If, in buying a used Focus-sized Family Hatchback, you merely want to buy a very good one and pay as little as possible for it, then Hyundai has a proposition for you: the original version of its second generation i30 that sold between 2012 and 2015. Smart, frugal, spacious and value-laden, this is one car that in its time, all the other big volume manufacturers were keeping their eye on.

If any car could be said to have built its brand, it's this one, Hyundai's i30. Here, we're looking at the original version of the second generation version as a used buy. At its launch in 2012, expectations for this model were high following the surprising excellence of its predecessor, a car that was crucial for this Korean maker. You see, back in 2007 when the very first i30 was launched, Hyundai was nothing more than a budget brand - no more, no less. Customers got behind the wheel expecting a cheap and cheerful Focus-sized Family Hatch - but they should have known better. They should have watched as at the turn of the century, Hyundai and its development partner Kia poached Europe's finest stylists and engineers. And known that the i30, like its cousin Kia's cee'd, would be a car to challenge the market leaders. The very first version of the i30 car was ahead of its time. Even though it delivered class-leading standards of packaging, ride, handling - even interior quality - many Golf and Focus buyers still weren't quite ready to trade in their enamelled keyfobs and take the big driveway credibility step involved in owning one. Still, no matter. The Korean company resolved to reap the real rewards in this segment with this second generation i30 design, a model styled to look sharper, specced to be better equipped and engineered to be more efficient. It sold until 2015, when the range was substantially facelifted.

What You Getword count: 543

If there was one area where the original first generation i30 came up conspicuously short of the top family hatchbacks, it was styling. It wasn't that there was anything really wrong with that car's shape: it was just that... well, can you remember what one looked like? No, we thought not. This MK2 model's design though, is decidedly more distinctive, with a European feel that hints at Ford with its hexagonal grille or a little at Peugeot in the sharply sculpted wheelarches. But it has its own appeal too thanks to a further development of Hyundai's now quite familiar 'fluidic sculpture' styling theme that's most obvious in the emphatic swage lines that flare out of the front door before sweeping down into the rear light clusters. Inside, equal effort has been made and there's just as great a change for the better. The cabin might not quite have the build solidity of a Golf or the flair of a Focus from this period, but it's arguably a more interesting place to be than either of those, only the shiny stalks betraying Hyundai's budget brand origins. Fragments of metallic brightwork may clearly be painted plastic but they've been carefully chosen and the floating spines that frame the centre console are stylish and neat. Fit and finish from the Czech factory is excellent and the soft-touch textures on offer around the dash show a lot of better established brands how it should be done. The dials are clear, the buttons large and easy to use and almost everything falls to hand nicely. There's a neat integrated 7-inch colour touchscreen for sat nav and infotainment on top versions that's as good as anything you'll find from a premium brand. And evidence wherever you look of really careful design. The way, for example, that the ventilation and audio controls have been moved further up than they would normally be so that they fall to hand more easily and free up extra storage space in front of the gearlever. There are plenty of other cubbies and compartment for clutter too, including decently-sized door pockets that will each take a 1.5-litre bottle. As for cabin space, well despite the fact that this car rides on a wheelbase no larger than its predecessor, Hyundai insists that there's more of it. True enough, up-front, there's significantly more leg and shoulder room than before - and better headroom too, even if you get a car fitted with the optional large panoramic glass room. Sizemic gains are less noticeable in the back, but there is slightly more shoulder room and it is now a little easier to squash in a centre adult passenger if you have to, thanks to the way that the designers reduced the size of the central transmission tunnel. Rear passengers even have their own air vents. Out back, the rather poky boot of the MK1 model i30 was here enlarged, 38-litres bigger at 378-litres. If you need more and want to push the rear bench forward, you'll find that instead of the backrest merely flopping onto the seatbase, the cushion flip up properly to facilitate an almost flat loadbay with up to 1316-litres of fresh air. If you need more space, there's the option of a Tourer estate version. 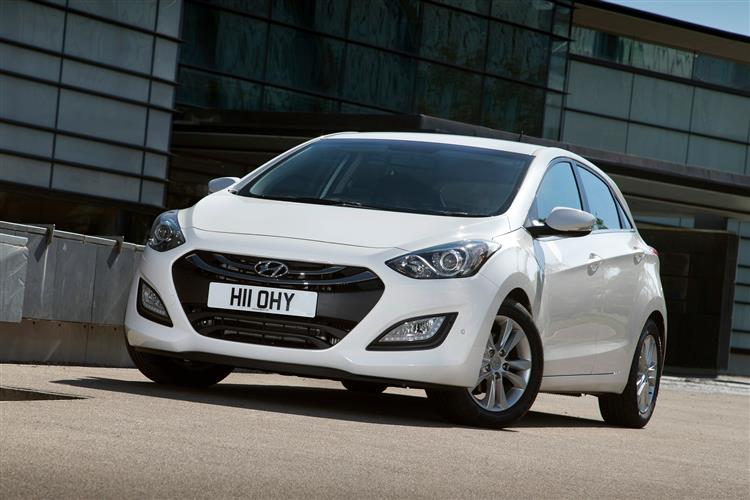