The Volkswagen Phaeton was a full Luxury segment saloon that ambitiously tried to bring Bentley build quality to a brand that was never seen as a credible choice by boardroom buyers in the Jaguar, BMW, Audi and Mercedes-dominated large four-door sector. The few customers that were able to look past the bonnet badge though, found this car an appealing thing to own and it makes far more sense as a used car purchase than it ever did new. If you can find one, that is. In late 2010, Volkswagen facelifted the Phaeton for its final few years of life. That's the version we're going to look at here.

Once upon a time, the Volkswagen Group had a Chairman by the name of Ferdinand Piech. He had big ideas for all the group's various brands but particularly for Volkswagen itself. Once merely a manufacturer of cars for the people, it should, he decided, in future also be able to offer a car that the peoples' plutocrats could also drive. Such a design would be constructed in a state-of-the-art glass factory in Dresden with parquet flooring laid beneath the assembly track. And customers would collect each of these top limousine Volkswagen models from the factory's basement via a giant frosted-glass opening cylinder, to the sound of suitable music. So was born, back in 2002, the Volkswagen Phaeton. Piech would probably never have got away with his mad dream had it not been for the fact that at the end of the last century, his group purchased the Bentley brand, a marque urgently needing an all-new platform for a brand new range of cars. The Phaeton project could provide it and offer savvy buyers who weren't especially brand-conscious all the build quality of a £130,000 Bentley Continental GT for less than the cost of a BMW 7 Series or an Audi A8. Sadly for Volkswagen, British buyers, like their European and American counterparts, didn't see things that way and treated the company's luxury saloon with scepticism from the start, struggling with the idea of paying over £45,000 for something with a Volkswagen badge. To try and re-awaken interest, Volkswagen facelifted the car in late 2010 and focused the engine choices towards a 3.0-litre TDI diesel 240PS option. It was in this guise that the car lived out the final years of its life until it was deleted from the Wolfsburg brand's range in 2014.

What You Getword count: 394

Volkswagen subjected the original version of this car to a whole series of detail changes throughout its time on sale, but the improvements wrought to this post-2010 facelifted model were the first to significantly alter any of the bodywork. The most obvious difference was found in the smarter front end with its revised grille, bi-xenon headlamp units and daytime running lights, intended to bring this car into line with the family look adopted at the time by lesser models from the Wolfsburg stable. Also tweaked were the front wings and bumper, plus there was a re-profiled bonnet. There was a smarter rear end too, thanks to a sleeker bumper and tail light design. Overall, it was a cleaner look, though whether it was a more distinctive one was debateable. Inside the cabin, the German brand also attempted to smarten things up, introducing a redesigned steering wheel and colour electronic display ahead of the driver. Drivers could adjust beautifully finished leather seating and the steering wheel electrically, access key information via a redesigned touchscreen display and enjoy what Volkswagen called 'draught-free' air conditioning that works via lovely vents that retract into the dashboard. Despite all this effort though, most thought that this car's ambience still fell well short of that provided by obvious rivals. That said, attention to detail throughout the car remained superb, thanks to construction techniques the same as those used to satisfy Bentley buyers paying three or four times as much. So the panel gaps are incredibly tight and the paint quality is as smooth as polished onyx. At the back, where this facelifted version provided more leather and less plastic to look at, things feel more up-market than they did in earlier Phaeton models, though your degree of total comfort will depend on whether you're seated in the long wheelbase bodystyle that was optional on this diesel and standard on the much rarer W12 petrol variant. Thanks to the extra 120mm of length discreetly massaged into the wheelbase, the lengthier version really does feel very exclusive indeed as you settle back, cooled by a 4Zone climate control system that in the W12 model is powerful enough to maintain a 22 degree interior temperature when it's 50 degrees outside. You can't fold the back seats forward to increase bootspace, so it's just as well that the trunk is suitably cavernous, at 500-litres. 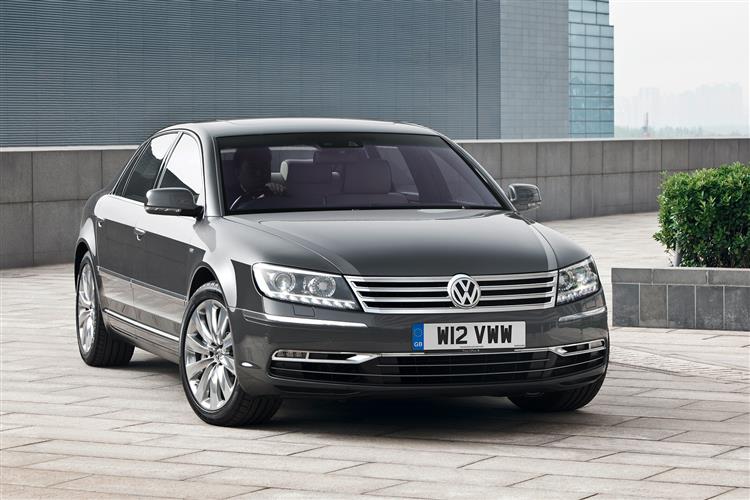