Supercar heritage doesn't just belong in Italy. Mercedes-Benz has plenty of it too and drew on much of it when in late 2011, it brought us one of the fastest and most desirable designs the German maker has ever unleashed upon us: the SLS AMG Roadster.

At Mercedes-Benz, there's a streak of competition pedigree hardwired into the corporate DNA. From the Silver Arrows of the 1930s and the exploits of Moss and Fangio in the Fifties to the way that in latter years, Mercedes has provided engines for some of the greatest names in Formula One: Hakkinen, Schumacher, Raikkonen, Hamilton - all have been powered by the Three-Pointed Star. Celebrities too have found the Stuttgart brand's appeal irresistible ever since the achingly beautiful 300SL Gullwing first made its appearance at the 1954 New York International Motor Sports Show and became first choice for the famous, everyone from Grace Kelly to Sophia Loren. The version most wanted was the Roadster model that arrived in 1957, one of the most desirable convertibles ever made - and one of the rarest, particularly in race-prepared SLS form, built to challenge the might of Maserati and Ferrari in the prestigious American Sports Car Championship. In November 2011, these classic models got a successor, this car, the SLS AMG Roadster. On sale for only two years, it turned out to be just as rare - and will be just as desired by future generations.

Convertible cars the world over have a drawback: they're very rarely a dynamic match for their fixed-top coupe counterparts. This is due to simple physics. Take a shoebox. It's pretty rigid with the lid on but take its top off and it flops about everywhere. Cars do the same, which is why convertibles don't tend to drive as well as coupes. This Mercedes is different. You see, it isn't a coupe with the roof lopped off. This car was designed from the outset to be a roadster, with all the strengthening already integrated into its all-aluminium chassis. From the very beginning, this SLS was created to ruffle your hair. Which is why, if anything, this Roadster version is better balanced than its fixed-top stablemate. It was also created to be driven - and driven hard, not just to be looked at. Which is why the engine is set so far back behind the line of the front axle to improve the handling. How does that work? Well, imagine pushing a shopping trolley around a store with a case of beers at the front. It'd be a right handful to steer around a corner wouldn't it? But bring that 24-pack to the back of the trolley and you'll swivel it round no problem. Same principle here. Enough though, about the engineering. Just look at this thing. It's hard to know where to start with some of the detailing. From the delightful gear shifter to the lustrous nano-particle paint finish, the inbuilt lap timer and the beautifully finished jet turbine-inspired air vents, this car is jam-packed full of the sort of considered design touches that come with this sort of price tag. Take the fabric convertible roof - quite a piece of work. Available in black, red and beige, this triple-layer hood retracts in just 11s at speeds of up to 30mph and folds cleanly in a compact Z-shape into the area behind the seats, the central roof section neatly doubling up as a tonneau cover for the roof compartment. It's been tested against almost every climatic extreme on the planet and might just be the most advanced soft top ever built. What's more, it doesn't eat into your boot space. There's still 173-litres of room back there, just 3-litres less than the coupe and still enough for a golf bag. You might want to be a little bit careful with the wing at the back though. It deploys automatically at 70mph, which might be a bit of an advertisement to the police should you whistle past on a motorway. Just have the excuse ready that it can be activated manually. 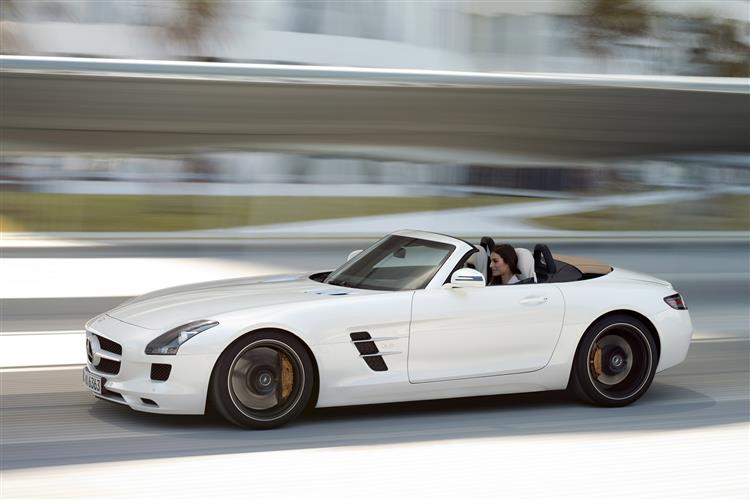