PLAYING ITS PART (some text hidden)

If your business needs a van, then funds-permitting, your first thought will probably be to get a big one. If it can carry lots of stuff, your driver will be able to make more deliveries in one day and take more equipment or cargo on a single trip. On the other hand though, large vans can be a nuisance in today's congested city centres where there's nowhere to park at the best of times, let alone when you're at the wheel of some junior HGV. Your driver could get delayed: the chance of damage will be greater. Then there are the increased running costs. So what's the answer? Perhaps something like this, a used little big van - Peugeot's second generation Partner.|

All the leading van makers used to offer one size of purpose-built compact van but now the majority have two - or at least two wheelbase options on the same model. The Partner (which shares its design with Citroen's Berlingo) is Peugeot's largest little van, with the little Bipper sitting below it in the hierarchy. It's a set-up that serves to give operators more choice, making it easier for them to get a van that precisely meets their needs. The Partner's remit is to cater for operators who want the lithe driving dynamics of a compact LCV but need to carry quite a lot of cargo with it. The Partner van launched in 2008 with a range that comprised S and SE trim levels and either a 90PS 1.6-litre petrol engine or 75 or 90PS versions of the 1.6-litre HDi diesel. The S model was offered with a choice of three payloads, 625 kg, 750 kg and 850 kg and two body lengths L1(standard) and L2 (extended). The SE version was available in a choice of three payloads, as the S model but with HDi diesel engines only. Standard and extended body lengths were also available. The 'Professional pack' option debuted in June 2008, bringing with it air-conditioning, a Bluetooth phone kit, a half-height bulkhead with mesh grille and a load space access door. Base 'S' versions also got a 'Plus Pack' included in the 'Professional' deal, the 'Plus' elements including one-touch electric windows, electric heated mirrors and remote control central locking (all this gear was already standard fitment on SE versions). A Partner Crew Van was launched in 2009, based on the 'S'-specification 'L2 HDi 90' model but adding to it the versatility of foldaway rear seats. April 2011 saw the introduction of an engine 'Stop & Start' system for the Partner, reducing emissions and fuel consumption, while Peugeot also launched a full-Electric version in 2012 as part of a package of updates for the range.

What You Getword count: 765

Whether you go for 1.6-litre petrol or diesel derivatives with L1 or L2 bodyshapes, you'll struggle to find a more competitive offering than this Partner in the compact van market. Its obvious rival is Citroen's near-on identical Berlingo van, but apart from that, the only really credible contenders are Renault's Kangoo and Volkswagen's Caddy. Both struggle to match the Partner's loadspace and payload figures: an equivalent version of the Renault offers capacity that's around 30% less, while the Caddy is also smaller inside and isn't even cheaper to make up for it. If you occasionally carry more than a couple of passengers, it might be worth considering the Crew Van variant, which offers the same carriage capacity as the L1 model when its rear seat is folded away. Standard features on all Partners include a CD stereo, central locking, electric front windows and internally adjustable door mirrors. Safety provision runs to a driver's airbag and ABS. The Partner L1 is offered with payload capacities of 625kg or 850kg, but if you go for the longer L2, there's but a single 750kg option. If that's enough, then it's of course a question of size: the Partner L1 offers 3.3m3, 10% more than the first generation model and a figure that compares favourably with the 3.0m3 you get in a Renault Kangoo or the 3.2m3 you get in a Volkswagen Caddy. If you want more loadspace, there are a couple of routes you can take. You could find a version specified with the longer L2 bodystyle that gives you 3.7m3, but if your need for extra room is only occasional, you can achieve exactly that figure simply by finding a Partner that was specified with the clever Multi Flex fold-flat outer passenger seat. This also gives you another 1,200mm of load length. Find a longer L2 Partner model specified with the Multi Flex seat and the total 4.1m3 of cargo space makes it nearly as big as Peugeot's Expert model from the next class up. Open the asymmetric unglazed back doors, lump your items over the relatively low 584mm-high load lip and there's a cargo area easily capable of swallowing a Euro pallet, given a loadspace length of 1800mm and a width of 1229mm between the wheel arches. To avoid heavy loads sliding forward into the bulkhead behind the driver's seat, there are six floor-mounted tie-down points, while a tailored plastic cover protects the floor, with panels partly defending the sides and the doors against minor scrapes. These will get quickly scratched and scuffed though, unless you find a Partner fitted out with a ply-lining kit for more comprehensive protection. There's up to 1250mm of loadspace height too and original buyers got the extra-cost option of an opening flap at the back of the roof for people like plumbers wanting to transport long items like pipes. If you're loading from the side, the sliding door reveals an aperture 737mm wide and 1192mm high, significantly bigger than you'd get in, say, a Volkswagen Caddy. Attention to detail that runs to a power socket and even a removable torch in the cargo bay is also carried forward into the cabin. First of all, there's plenty of storage space: a full-width shelf above the windscreen that you'd be wise not to use for heavy items, a lidded but not lockable glovebox that sits below a shelf on top of the facia, a lidded compartment above the instrument panel and pigeonholes either side of the heating controls. You also get a couple of cup holders for your early morning McDonalds coffee and decently sized storage bins on each door for the debris from your McBreakfast. If you've got yourself a Partner model fitted with the clever Multi Flex outer passenger seat, you can even flip the seat cushion up to make a handy storage area for very tall items on the cab floor. For the driver, everything falls easily to hand and height adjustment for both seat and wheel makes it easy to get comfortable. And running costs? Well, service intervals - set at 12,500 miles or every two years - are pretty frequent but at least the cambelt only needs changing every 150,000 miles or 10 years. Go for one of the diesels and you should find that fuel economy is impressive. Both engines return an identical 48.7mpg on the combined cycle together with 153g/km of CO2, so it's hard to understand why any business not considering a bi-fuel conversion would opt for the petrol version, given its modest 34.4mpg and 195g/km showing. Insurance groupings range between 1 and 3. 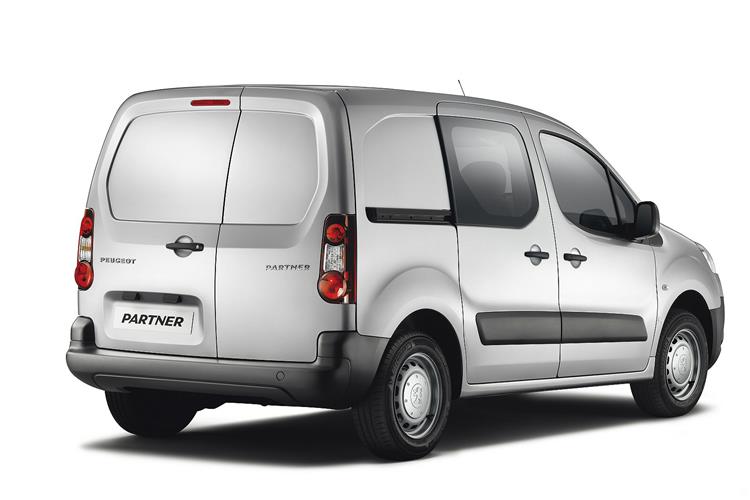