The Vauxhall Astra feels like a bit of a national institution, a nameplate that has signified a small, affordable family hatchback for over three decades. The range has grown over the years and was especially wide in sixth generation guise, with the core five-door model joined by a capacious estate, a coupe-like three door GTC model and a tyre shredding VXR hot hatch. The MK6 Astra was introduced in late 2009, but here, we're going to concentrate on the facelifted line-up, which arrived in 2012 and lasted Vauxhall until the seventh generation version's introduction in the Autumn of 2015. You'll find plenty of these late-model MK6 Astras about - and they appear to offer plenty for the money. This Vauxhall can prove to be a very efficient choice too, if you select your engine carefully. Pick one of the newer turbocharged petrol engines or a frugal 1.6, 1,7 or 2.0 litre diesel, then match your choice to a plush trim level and you've potentially got a cracking used buy. We show you why.

Despite Vauxhall's best efforts over thirty years and five different generations, their Astra has rarely been the family hatchback its drivers would ideally have chosen to own. Not because it's ever been a bad car: just never a class-leading one. The kind of model you bought because it was good value. Or more likely, because you were given the keys by your company Fleet Manager. At the launch of this MK6 version in 2009 though, greater efforts than ever before were made to ensure that 'want one' factor. So it was bigger, sharper to drive and nicer to sit in. And back then, it looked like a very complete proposition indeed. By 2012 though, much had changed in the family hatchback segment. The intervening period saw the introduction of all-new versions of this car's closest two segment rivals, Ford's Focus and Volkswagen's Golf, as well as complete re-designs of other important sector contenders like SEAT's Leon, Honda's Civic and Toyota's Auris. Plus there was the rise of the South Koreans, with new generation versions of the Kia cee'd and Hyundai i30, models that had become increasingly difficult for family hatchback buyers to ignore. Hence the need, in the Autumn of 2012, for a package of Astra changes designed to keep this car current in such an increasingly close-fought family hatchback sector. These created the smarter, higher-tech, more efficient car we're looking at here.

What You Getword count: 622

Though the aesthetic improvements made to this improved MK6 model Astra were subtle, they did succeed in giving it a much fresher look. We're talking here of the five-door hatch and the Sports Tourer estate: the other Astra bodystyle option, the GTC Coupe, had been introduced as recently as the end of 2010, so needed little visual re-fettlement. And it's that GTC that provided the inspiration for many of the aesthetic changes made to this facelifted range. Take the front end which, as well as a redesigned bumper, got a more pronounced GTC-like lower grille, while the upper grille got a more prominent wing-like chrome bar and the option of LED daytime running lights. The rear was revised too, with smarter rear panel styling and a chromed lower moulding. Of course, the whole effect was even more aggressive if you went for one of the top performance models - the BiTurbo diesel or the VXR hot hatch for example, both of which got bespoke bodykits. Otherwise though, it was as you were for sixth generation Astra buyers. People for whom size tended to matter. Back in 2012, this was, after all, just about the largest car in this segment of the market. Vauxhall boasted that it was longer than virtually all of its main rivals, sat on a longer wheelbase and was just about the only family hatch buyers could have that was over 1.5m tall. That's something that as a used buyer, you'll notice most on the rear seat. A fully-grown adult really can sit comfortably in the middle for decently long periods alongside passengers who'll appreciate the fact that you can slide your feet properly right under the seat in front. So yes, this really is a proper 5-seater in a way that many of its rivals simply aren't. In fact, there's basically as much space here as you'll find in the brand's apparently bigger Insignia model. One reason for buying the larger car might, perhaps, be that its boot betters the 351-litre bay in the Astra by 149-litres, but with all the seats flattened, the Astra actually offers around 200-litres more than its supposedly bigger stablemate, with 1216-litres available. There's also a useful two-level floor that you can position to suit your load. If you need more, then the Sports Tourer estate delivers 500-litres of boot space with all the seats in place, a figure that rises to 1550-litres when you flatten the rear bench. Even the GTC coupe is a lot more spacious than you might imagine, delivering a 380-litre boot that can be extended to 1165-litres if need be. And at the wheel? Well, this sixth generation Astra's cabin felt very plush for its class back at the 2009 launch, but by 2012, rivals had improved to the point where the interior of this Vauxhall merely felt par for the class. The nice touches remain though, like the elegance of the dashboard design and the smart chromed rings around the dials and switches. We like the tiny red mood lights around the base of the front doors and under the gear lever that on plusher models, throw a welcoming glow across the cabin at night. And the properly practical features that suggest this car to have been designed by real people - like the way that the storage bins in the doors can actually hold a 2.0-litre bottle of drink. Or the false floor in this lidded cubby that will hide your iPod. It's true that because the centre console is rather crowded with small switches, the dash doesn't offer the most immediately intuitive layout you'll come across but once you adjust to what everything does and how it does it, you'll bond with it pretty well. 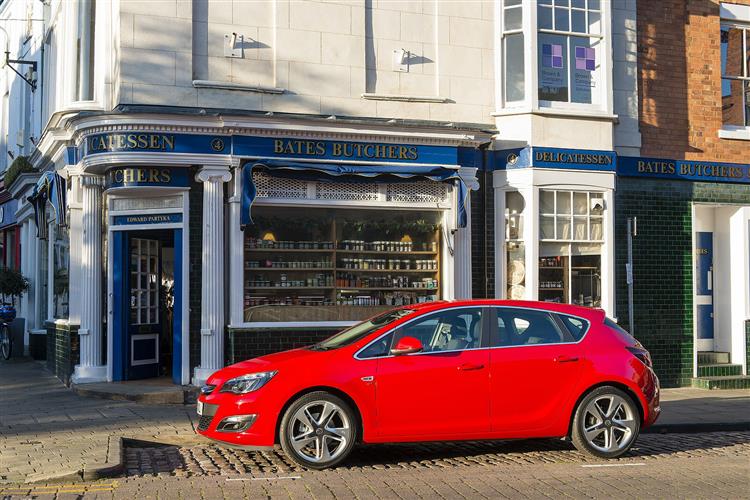