The Ford S-MAX is that rarest of things - a family bus with an element of coolness about it. Manufacturers have tried and failed for many years to make an MPV that was something other than weird, dorky or overly try-hard, but the S-MAX's blend of solid practicality combined with genuinely elegant styling was a hit from the word go. Here's what to look for when tracking down a facelifted first generation version.

Originally arriving in UK dealers in summer 2006, the Ford S-MAX didn't take too long to make an impression, fending off challenges from the Opel Corsa and Citroen C4 Picasso to take home the 2007 European Car of the Year award. The range was steadily augmented right through to 2010, which is where we pick up the story here. Having been on sale for four years, it was time to treat the S-MAX to a refresh in order to keep it at the top of its game. The styling was treated to a makeover, keeping much the same silhouette but tidying up the details, with a strongly sculptured bonnet and a gloss black, lower front trapezoidal grille. A new lower front bumper included distinctive LED daytime running lights on high end models. At the side, there was a chrome strip surrounding the whole glass area, while the rear view showed a re-profiled tailgate, chrome bar between the rear lights, lower bumper assembly and LED tail lights. Under the bonnet, the S-MAX got the punchy 2.0-litre 203PS EcoBoost petrol engine, sold alongside 115, 140 and 163PS 2.0-litre Duratorq TDCi diesels. Additionally, the Ford PowerShift twin clutch transmission was introduced as standard on the EcoBoost petrol engine and as a cost option with the 2.0 140PS and 2.0 163PS Duratorq diesels. A Blind Spot Information System was also debuted. Ford announced a replacement for the S-MAX at the start of 2015.

There's only so much you can do to make a large 7-seater people carrier look sporty but designer Claude Messale certainly did his best to make the aesthetics match the dynamics. This car is a mere 2 inches shorter in height and 3 inches shorter in height than its Galaxy stablemate but visually, the two cars are worlds apart. The differences lie mainly with the S-MAX's lower, sportier roofline and its more car-like front end: the side vents and the air gills either side of the low front air intake serve no functional purpose but they do look good. There were cosmetic changes made to this improved S-MAX, but you needed to be a bit of a Ford anorak to spot them. Buyers got a more overtly contoured bonnet, deeper front bumpers, a chrome surround for the glass and daytime running lights on plusher versions. At the back where the look is necessarily a bit frumpier, the bumpers were also deeper and there were smarter wraparound rear light clusters. As on the original version of this model, the vast glass area and the slim windscreen pillars mean that at the wheel, visibility is excellent and it's easy to find the ideal driving position thanks to the amount of seat and wheel adjustment provided. Rather ambitiously, Ford wanted this car to appeal not only to someone who might be considering another large people carrier but also to owners of prestigiously-badged executive estates, hence the high quality of fit and finish the Belgium Genk factory produced around the cabin. In the rear middle row, there's decent room for three adults and the width of the cabin comes in handy if you're trying, for example, to fit three child seats back here. Older children though, will flock towards the two rearmost chairs that fold out of the boot floor. Because an S-MAX loses 6 inches in height over a comparable Galaxy at the back, these extra seats have to be set low, so many adults will find themselves riding knees up, but aside from that, proper fully-sized people will be relatively comfortable here during short to medium-length journeys. That's not something that could be said of the 7-seater mini-MPVs (Vauxhall's Zafira, Peugeot's 5008 and so on) that some journalists insist on comparing this model to. It's actually a bigger class of car than that, almost VW Sharan or SEAT Alhambra-sized, something you only fully appreciate when you use the innovative FoldFlatSystem (which offers no fewer than 32 seating permutations) to reveal a genuinely huge load floor that measures 2.0 by 1.15 metres - about as big as a double bed, with lashing points to keep stuff in place if you do fail to resist this Ford's sporty character. There's a removal-van-like 2,000-litres of space back here and, almost as impressive, still 285-litres even if you have all 7 seats in use. There are also no fewer than 26 different cubbies located around the cabin so you'll need to know where you left that key/credit card/wedding ring or it could be a lengthy search. In total, there's a full 90 litres of oddment stowage in total. 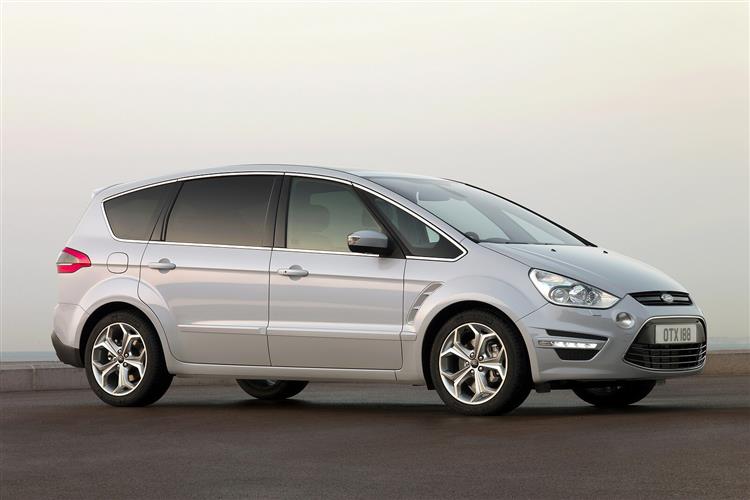