The Jaguar XF is one of those cars that quietly goes about its business, doing very well for its manufacturer, seemingly content to let other big executive cars hog the limelight. No, it doesn't sell in anything like the numbers of a BMW 5 Series or a Mercedes E-Class and while Jaguar would like it to, they're secretly delighted at the reception it's got here and abroad. The original XF wowed the crowds when it was launched back in 2007 at the Frankfurt Motor Show. Well, it wowed about 90% of the crowds, the other 10% grumbling that it looked like a big Mondeo. Getting away from a hidebound design language was kind of the point of that original XF. It could look like anything vaguely good-looking as long as there was nothing of the old-school about it. If you couldn't picture Arthur Daley sitting in one, it was a winner. Here's what to look for when buying one of the post-2011 facelift models.

The XF had a facelift? Who knew? Perhaps Jaguar could have been a bit more effusive about the changes to the XF, but they were probably getting a bit giddy about getting ready to launch their F-TYPE sports car and perhaps overlooked this big seller as a result. Nevertheless, in September 2011 we got the restyled Jag XF, with a new bonnet, front and rear lights and bumpers, front wings and improvements to the interior switchgear, the navigation system and seats. Not long afterwards, in January 2012, Jaguar launched an entry-level diesel version, the 163PS 2.2-litre model offering a more affordable gateway to XF ownership than its 190PS siblings. In September of that year, there was some more fine-tuning of the range, with the XFR Sport Pack derivative being announced. A more significant entrant was the Sportbrake estate model, which added much-needed breadth to the XF line-up. The monster XFR-S was announced in 2013, with the Sportbrake version arriving in Spring 2014. Jaguar announced a run-out special in the shape of the R-Sport Black model at the start of 2015. This featured 20" Black Kalimnos alloy wheels and a 770w Meridian Surround Sound system, the brand claiming that the R-Sport Black offered an additional £8,770 worth of value over standard R-Sport models for just a £2,100 increase to its price. The successor to the XF was first teased in 2014, with an official unveiling at the 2015 New York Show.

What You Getword count: 484

The original XF was a beautiful piece of styling, a shape you'd be frightened to aesthetically fiddle with. But Jaguar Design Director Ian Callum wasn't and somehow, the improvements made to this revised version manage to create a far more eye-catching interpretation of the 2007 C-XF concept car - the model that the whole XF concept was originally based upon. Post-2011 facelifted XFs got the kind of front end many owners might like to have seen from the beginning, with a redesigned grille, a sculpted bonnet, streamlined wings and, most notably, bi-function HID xenon headlamps resembling those of the larger XJ saloon, complete with jewel-like LED daytime running lights arranged in a 'J' pattern. Wander past the Aston Martin-style side vents in the wings and you'll find that there are LEDs at the rear too, these extending further into the bootlid beneath the signature chrome strip. Inside, not much being wrong with the original design of this car, there wasn't a great deal for the facelifted version to fix. The auto gear selector still rises into the palm of your hand on start up as the dashboard airvents acrobatically turn into position to greet you as you fire the ignition. Only those very familiar with the original model will recognise the more supportive seats, the smarter satin-feel switches and the classier graphics on the central 7-inch touch screen that looks after most of the main dashboard functions. Relax inside an XF and from the stitched leather dashboard and door cappings to the aluminium and wood furnishings, it really does feel special. The craftsmanship, materials and attention to detail all impress. Jaguar's designers have sought to find more interesting ways to say 'luxury', and largely, their efforts have worked. The lines are clean and pure, the materials are familiar, but with a very modern flavour - from soft-grained leathers to real wood veneers with a bold, contemporary spin. Even the phosphor blue interior lighting has its own mood. Unfortunately, it would have taken more than a mid-life facelift to free up any extra space at the rear. The coupe-like styling tells here. Once you get inside though, there's slightly more space than the flowing exterior lines might lead you to expect, even if boxier rivals can do better. The prominent transmission tunnel means that there's only really room for two adults but headroom might be a slight problem for the tallest occupants. Jaguar is unapologetic on this front, pointing out the undeniable fact that for most potential owners, as long as rear seat room is adequate, then luggage space and sporty styling represent higher priorities. Just as well then, that there is a reasonable amount of boot space at 500-litres, even if that figure can't quite match that offered by obvious rivals. If it isn't enough, then you can at least push forward the rear seat backs to extend the luggage bay out to 923-litres. 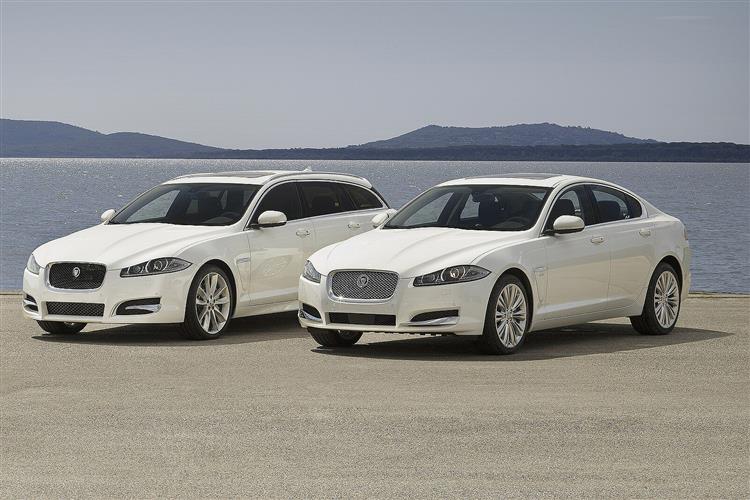