The modern folding hard top convertible has been with us for quite some time now, the Mercedes SLK of 1996 responsible for kick starting the trend that manufacturers such as Renault, BMW and Peugeot helped sustain. Peugeot say that they originally invented this kind of cabrio and their early Noughties 206CC and 307CC models, though far from perfect, offered wind in the hair motoring with coupe security for an affordable price. This success prompted Peugeot to create CC versions of their subsequent 207 and 308 designs, both greatly improved when compared to their predecessors. It's the larger 308 CC we'll be concentrating on here, specifically the post-2011 facelift cars that offered an even more attractive package.

Peugeot has quite a history of folding hard-top cars like this 308CC. Few of us will be able to recall the 301, 401, 601 and 402 Eclipse convertibles of the 1930s but there's a good chance that you'll be able to picture the cabriolet that kick-started the modern trend for folding metal canopies on affordable mainstream cars, the Peugeot 206 CC. So successful was that design, launched at the turn of the century, that it spawned a whole series of rivals. Keen to keep market leadership, Peugeot not only brought us the 207CC in 2007 to keep its control over the affordable supermini-based end of the class but also tried its hand at the CC folding metal roof concept in the market sector where most like-minded cars reside, that of larger Focus-sized family hatchbacks. First up was the 307CC, launched in 2003, but 2009 saw the French brand produce a much more polished product in its replacement, this 308CC. At launch, this car didn't have too much to beat. Class entrants from Ford, Renault and Vauxhall were long in the tooth and Volkswagen's desirable Eos was significantly more expensive. But by 2011, things were a little different. There was by now an all-new Megane CC with a clever glass folding roof on the market, along with an improved and more affordable Volkswagen Eos. And there were signs of a drift back to the kind of fabric-roofed convertible that this Peugeot's £20,000-£25,000 budget could buy you, with cars like Cabrio versions of the VW Golf, the BMW 1 Series and the Audi A3. The result was a need for this 308CC to up its game with sleeker looks, lower running costs and more equipment. All of which were delivered by the revised model we're looking at here.

The 308 may technically be a four-seater, but the rear chairs are windy with the top down and cramped with it up. Legroom is also a bit tight, so don't expect to go touring with adult friends. Not only will they have difficulty fitting in the back, it's unlikely you'll get their luggage in the boot either. Trunk size might seem reasonable at 403-litres, but fold the roof and this drops to 226-litres. At least the roof can be opened or closed at speeds up to 7mph, handy if it starts to rain in stop start traffic. If you don't want to fully drop the top, all four side windows can be dropped to create a pillarless coupe, a nice touch. One feature that is definitely worth searching for is Peugeot's clever 'Airwave' vents in the front seat. These can blow warm or cold air on your neck, making open motoring a possibility even in the midst of winter. These, along with the option of a leather-capped dashboard, make for a remarkably premium feel. It's just a shame some of the plastics do hurt the illusion, especially the wheel-mounted stalks. Don't look too closely and it's a very nice place to be though. Affordable base 'Access' models receive a leather steering wheel, electric windows, air conditioning and 16" wheels, while the mid-spec 'Active' trim highlights include climate control, a handy rear parking aid and 17" wheels. Plush 'Allure' spec adds those 'Airwave' seat vents, a wind deflector, leather seats and 18" wheels. Sportier 'GT' trim adds a styling pack and the option of the 200PS petrol powerplant. 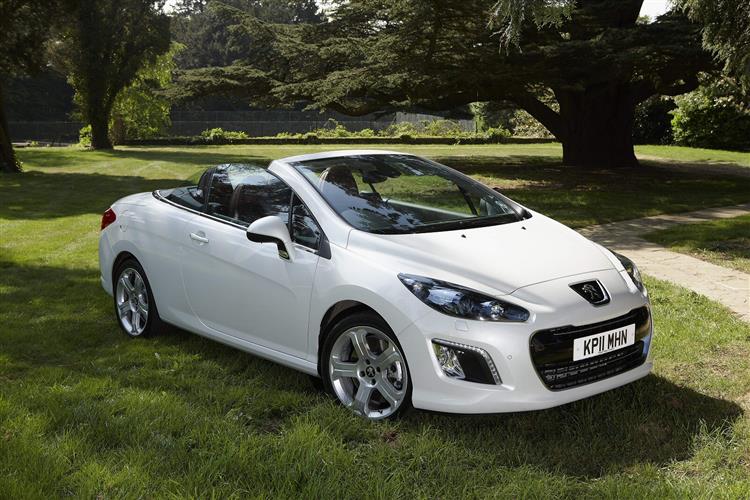