When Jaguar launched the XFR super saloon in 2009, it was lauded for its performance and handling, which were described as BMW M5-rivalling at worst and M5-beating at best. Come the XF's facelift in 2011, a much-needed aesthetic overhaul was revealed, but under the sharper, more aggressive new look, it was a case of 'more of the same, please'.

The first XFR was actually rather short-lived, having been brought out in 2009 to offer a more dynamic replacement to the 4.2-litre XF 'S' model, but by 2011, the XF's looks were starting to date and both XF and the related XFR were refreshed. Despite this short lifespan, the original XFR had made a big impression, taking the fight to the BMW M5 in its own particular style and earning plaudits as one of the sports saloons of the 2000s. Once the facelift arrived, it came with a sharper front end and a slightly improved cabin, which gave it a much more modern and slightly less chunky look. Inside, there was a bit more technology and a slight improvement in quality, but the XFR's centrepiece has always been the stonking great V8 under the curvaceous nose. This refreshed first generation model lasted until the announcement of the second generation XF range in the Summer of 2015.

What You Getword count: 214

Considering that most of the first generation XF line-up was powered by 2.2-litre diesel engines, the XFR and the more powerful, more outlandish XFR-S variant could be described as the only 'proper' Jaguars in the range. With these variants, not only do you get the smoothness of a petrol engine and the burbling exhaust note of a V8, but you also get a 0-62mph time of 4.7 seconds and an electronically limited top speed of 155mph. On the outside, the XFR is subtle, with little to give away its high and mighty status up at the top of the XF range. There are slightly enlarged air intakes at the front, bonnet louvres, red brake callipers, a rear spoiler and a smattering of 'R' badges. Inside, there are 18x18-way electrically adjustable front seats, which are heated, cooled and wrapped in leather, and sporty-looking carbon fibre inserts dashboard. Other standard kit includes the Meridian 825W sound system, front and rear parking sensors and a new infotainment system housing satellite navigation and a reversing camera. Despite the high level of equipment, some of the cars on the used market are likely to come with a couple of optional extras, such as the TV tuner for the infotainment screen, the adaptive cruise control or the interactive voice control. 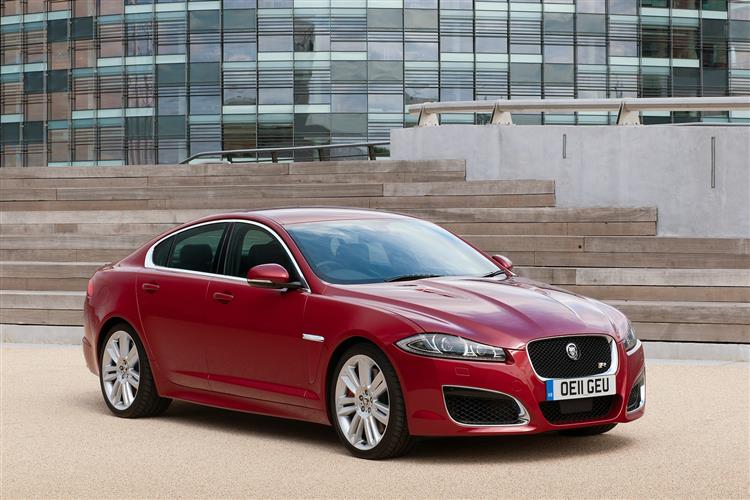