SLEEK AND YE SHALL FIND (some text hidden)

Conventional wisdom dictates that a coupe has two doors, occasionally three if you count a hatchback rear. Five doors, as boasted by the Mazda RX-8, is pushing things a bit but a quartet of doors is the one attribute that generally precludes entry to the coupe club. Possessed of four doors, you are usually a saloon. Saloons, as we all know, are often a bit staid, driven by middle management and chubby gentlemen the world over. The Mercedes CLS-Class broke that particular mould. Call it brutish, muscular, whatever, but the MK2 model CLS isn't as distinctive as its Baroque predecessor. While it might not turn so many heads, it has become a massively improved car, helped in no small part by the amazing CLS 63 AMG at one end of the range and the diesel models at the other. This CLS is now a great used buy. Here's what to look for.

The Frankfurt Motor Show usually throws up a few original concepts and we got exactly that back in 2003 when Mercedes unveiled their Vision CLS Concept. It looked amazing, all baroque curves and bold surfacing. A four-door coupe, they called it. How we chuckled. It would never make production. But it did, and quicker than anybody guessed, with cars arriving in dealers in 2005. That first-gen CLS was a soaraway success, spawning a whole legion of copycats. It wasn't actually all that long for this world though. Mercedes ignoring the usual seven-year production cycle for a car in this class and announcing the CLS' replacement in 2010. The second generation CLS, the C218 in Merc-speak, wasn't as radical-looking as its predecessor. In fact, it struck many as a retrograde step, in styling terms at least. Yes, it looked bigger and more brutish, but where was the purity of line that so defined the initial CLS? Gradually we've become a bit more used to this car and realised that there were other things to admire. Those muscular wheel arches, the well-appointed cabin and the fact that it was so much better to drive for a start. The CLS 63 AMG model was added to the range in pretty short order, packing a 525PS 5.5-litre twin-turbo V8 and a Shooting Brake estate version of the CLS was added in 2012. The 63 AMG was treated to a performance boost in 2013, with peak power rising to 557PS. The CLS was eventually facelifted in 2014.

There was a certain delicacy to the styling of the first CLS. It was almost as if a basic shape was decided on early in the design process and then all the details and extraneous gewgaws were pared back. Less really was more. The second generation model decides that more is, after all, more. The styling is busier with a more muscular bulge to its wheel arches and a front end that is more pit bull than its slightly feline predecessor. Mercedes should be commended for trying something new and different instead of merely trying to rehash the original. The same story goes for the interior. No, it's not as bold and minimalist as the original CLS, that car's 'plank across the dash'-style interior look being unlike any Mercedes model before, but functionality in the MK2 model car has improved no end. The driving position is lower as well, the driver feeling seated in rather than on the big seats. The rear doors are longer than before, which makes getting into the back a little easier. It isn't as spacious as an E-Class inside, but Mercedes claims useful gains in head, shoulder and legroom over the old MK1 CLS and the boot is 15-litres bigger than before at 520-litres. Duck your head and drop into the back of this four-door coupe and you'll find a pair of rear seats. You get room for three in the back of the estate version, although it has to be said that that Shooting Brake derivative is rather narrow and its shapeless middle seat will soon highlight family pecking orders. You wouldn't want to go too far perched on it. With a load volume of between 590 and 1550-litres, the Shooting Brake's cargo bay offers a lot of room, despite the flat, sporty lines of the roof. There's more room in the luggage compartment with the rear seats in position than you get in a 5 Series Touring for example. It's easy to use thanks to the automatically opening tailgate fitted as standard. From new, most CLS Shooting Brake customers chose a carpeted load bay with brushed aluminium rails inset, but those new car buyers also had a wonderfully extravagant and quite beautiful option available to them - the designo wooden luggage compartment floor. Here you got a cherry tree wood finish that contrasted with inlaid smoked oak and aluminium rails. Mercedes claimed that if offered the sort of elegance most associated with yachts. While wildly impractical, it's certainly a real eye catcher. 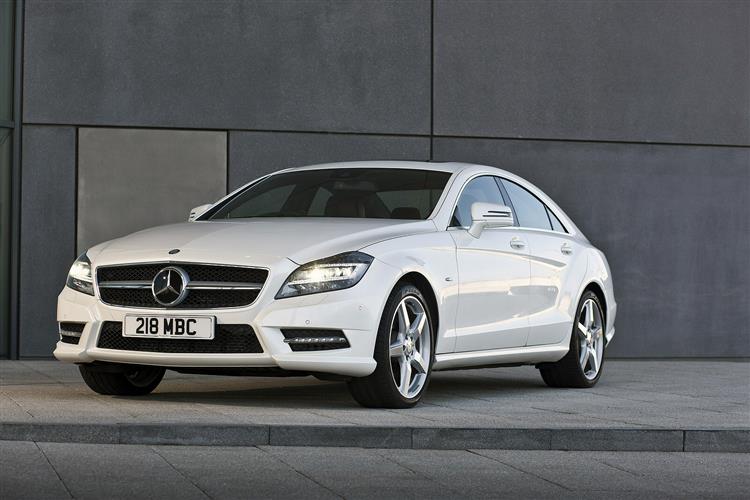