THE LION ROARS BACK (some text hidden)

If pushed to name the most significant car launch of this decade, some might point to the Tesla Model S for its incredible electric technology, or maybe the Toyota GT86 for redefining our relationship with rear-wheel drive sports cars. The car we'd choose though, would be the Peugeot 208. It's a supermini that actually does very little that's new or groundbreaking, but it's significant for a hugely uplifting reason if you're a car enthusiast. It was the car that put Peugeot right back in the game as a top-drawer manufacturer of fun, classy hatches. The brand's Eighties 205 supermini was a champ but its successor, the 206, was a dud that sold in huge numbers. That was actually about the worst publicity Peugeot could have given itself, broadcasting its ineptitude to a great deal of customers. The subsequent 207 was a trier, but was never quite there. With the 208, though, it was a different story. Fun, well-built, sharply-styled and full of interesting features, it was a winner from the word go. If only Peugeot could get all those people whose faith in the marque was shaken by their 206 experiences back in the fold, the 208 could be a fixture at the top of the sales charts. Here's what to look for when buying used.

Things started well for the Peugeot 208 from the outset in 2012. The design got its Euro NCAP five-star crash test result in the bag in the April of that year, then was first displayed to the crowds at the Goodwood Festival of Tweed a few months later in June. Then it scooped Auto Express' gong for 'Best Supermini' before real life buyers ever got to try one. By September, Peugeot was announcing a 208 GTi hot hatch version and an 'XY' luxury derivative. At the end of 2012, Peugeot realised that the 208 had generated the strongest order-take for a launch of any vehicle in the company's history and had contributed to a 5.6 per cent growth in year on year sales. The good times were coming back for the French brand. Old habits die hard though and they were unable to resist the old short term sales boost strategy of launching special editions. We got the first of these at the start of 2013, the 'Intuitive' version. May 2014 saw the launch of another special edition, the 'Style' and another followed in June, this time based on the GTi and christened the 'GTi 30th Anniversary'. In February 2015, a revised Peugeot 208 was announced for the Geneva Show, with revised styling and more personalisation options.

What You Getword count: 241

The 208 represented a new design direction for Peugeot in this class. Many of the styling cues are directly attributable to the SR1 show car which debuted at the 2010 Geneva Show and while the basic silhouette could be accused of being a little more generic than its predecessors, the detailing is crisp, the surfacing neat and the overall shape is extremely cohesive. The GTi version looks great, with a hat tip to the legendary 205 GTi in the form of a metallic insert on the C-pillar. The cabin is a big step ahead too and there's some novel thinking afoot. Rather than expecting drivers to peer through the steering wheel at the gauges in the usual way, Peugeot instead made the wheel smaller and lower so that drivers would be able to look over it for an unobstructed view of the main instrument binnacle. Higher quality finishes and a very neat infotainment system feature on all but base-trimmed models, while both three and five-door variants offer plenty of occupant space by segment standards. Not only do rear seat occupants get 5cm more knee room than they would have done in the 207 model this car replaced but they get that in a model 7cm shorter and 1cm lower than that predecessor. That increased passenger space doesn't come at the expense of luggage capacity either, with the 208 offering 1.5 cubic litres more than the 207 when it came to bootspace. 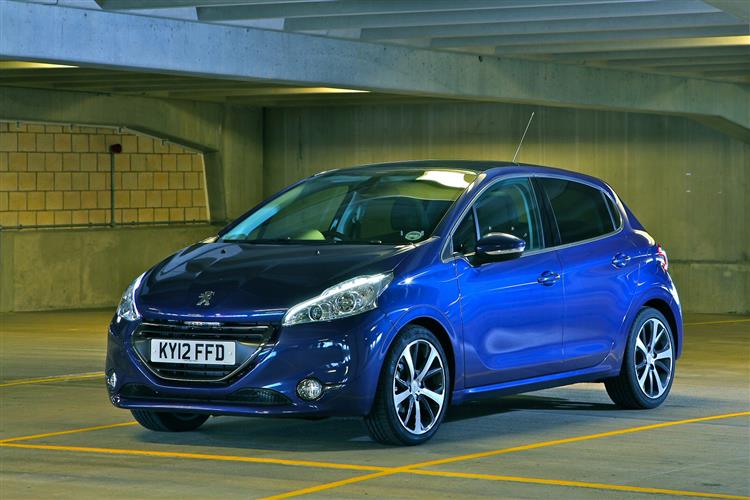