THE VAN THAT CAN (some text hidden)

If your business driving tends to be more multi-mile than multi-drop and payload capacity is less important than personal comfort, you might well need a van that's more car than a commercial vehicle. Vauxhall's Astravan is just such a model; not the biggest van on the market, but one with the looks, composure and class of a common or garden small family estate. Here's what to look for when shopping for a used example.

This fifth-generation version of the Astravan appeared in dealers in September 2006, marking a continuation of Vauxhall's longest-established van nameplate. Its genes could be traced right back to 1981 when the first Astravan replaced the Chevette-based Chevanne. The second-generation Astravan debuted in 1985 and included the high-roof Astramax variant (later replaced by the taller Corsa-based Combo). The third-generation Astravan appeared in 1992, ushering in new levels of build quality and commercial vehicle dynamics, before being replaced by the current model in 1998, which did extremely well in the absence of a direct Ford Focus commercial rival. The 2006 model brought added sophistication and build quality, the range being keenly priced from £9,995 and launching with a 90PS 1.4-litre petrol engine and three diesels: the 90PS 1.3 CDTi, the 100PS 1.7 CDTi and the 120PS 1.9 CDTi, the latter available with manual or automatic transmission. There were two trims, Club and Sportive, with Vauxhall introducing a ritzier Sportive SE a year later. The Astravan proved very popular with buyers who liked the way it drove. It won best car-derived van at the 2008 Professional Van and Light Truck Awards, as well as being commended in the Commercial Motor Tester's Choice awards 2007 and carrying off the What Van? Editor's Choice accolade the previous year. It also contributed to Vauxhall's record commercial vehicle sales in 2007. In 2009 the all-new Astra car range was launched, but the existing Astravan model continued, bolstered by what Vauxhall called its 4x4x4x4 deal, namely four years zero per cent finance, four years free servicing, four years roadside assistance and four years warranty. The introduction of an ecoFLEX model into the range saw the Astravan through to the end of its production run in 2012, Corsavan and Combo models taking up its baton instead.

The Astravan's origins will become instantly apparent to anyone who's familiar with the styling of the 2004 to 2009-vintage fifth generation Vauxhall Astra. It's a modified version of the Estate model from that line-up that's designed to retain the feel of the passenger carrying base vehicle while adding extra load-carrying capacity in the form of a long, low area immediately behind the front seats. The Astravan inherits the Astra's sharp lines with the prominent V on the grille, the large pointy light clusters and the roof line sloping away towards the rear. By the modest standards set by rival compact vans, it's a very good-looking vehicle indeed. The Astra Estate's rear glasswork and seats obviously got the chop in the Astravan conversion process but the commercial modifications go considerably further than that. A half height steel bulkhead comes as standard fit and buyers from new had the option of extending this to roof height with a mesh partition. This set-up is known as the Flex system and by means of a flap in the bulkhead and a folding passenger seat, it allows longer items to be accommodated. In standard form, the load area is 1,780mm in length and 900mm high but the absence of any side access means that you often have to physically climb inside to retrieve items that have slid down to the far end. A load liner protects the floor and there are six tie-down points for securing cargo, something that it would be wise to do before exploring the Astravan's impressive handling package. The 1.6m load volume and the 650kg maximum payload mean that carrying capacity isn't the Astravan's strongest suit. Commercial vehicle interiors are usually bland, no-nonsense affairs with the emphasis placed on tough materials and sturdy construction but the Astravan's close links to Astra passenger cars pays dividends here. The design and materials that position the Astra as one of the top family hatches on the market make the Astravan arguably the top light van for interior sophistication and comfort. The two-tone dash and door panels take on the sharp, angular theme from the exterior, with the controls intelligently positioned and the aluminium-ringed instruments easy to read. 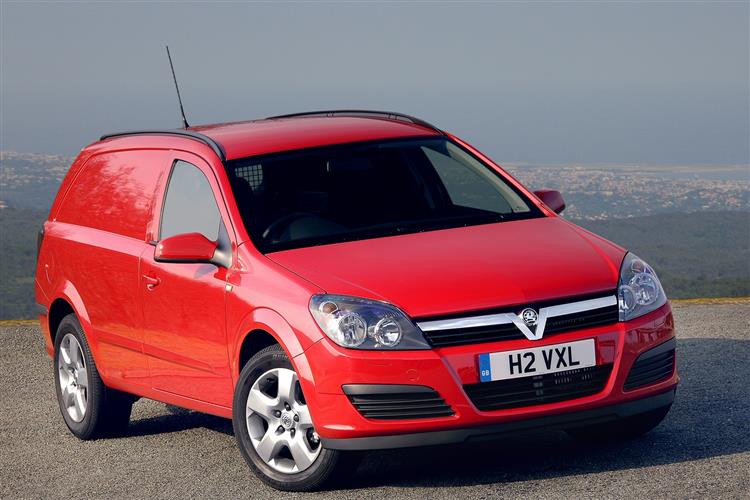