DO YOU THINK I'M XC? (some text hidden)

Volvo were one of the first manufacturers to get with the concept of the lifestyle 4x4 estate, their Cross Country mopping up a good percentage of customers who had grown out of a Subaru and who couldn't afford or didn't want an Audi Allroad. The Cross Country evolved and in line with their branding philosophy was rebadged the XC70. It's everything you expect of an all-wheel drive Volvo estate; rugged, practical, beautifully engineered and supremely reliable. If excising the risk out of buying used were possible, the Volvo XC70 would be a prime candidate for most bulletproof used car buy.

The genes of the XC70 can be traced back through the V70 Cross Country right back to the V70 XC, originally launched in April 1999. Although many credit Audi with introducing the concept of the premium 4x4 lifestyle estate, history shows that Volvo beat their German rivals to the punch by a year. The XC70 itself made first landfall here in the UK in September 2002 with a range consisting of S and SE variants of the 200bhp 2.5-litre turbocharged five-cylinder petrol unit or the 163bhp 2.4-litre diesel which also boasted five pots and a turbocharger. March 2003 saw a revision to the range when the S trim level was ditched, Volvo realigning the XC70 alongside its big brother the XC90. The revised trim structure opened with the SE version and was topped out by an equipment laden SE Lux model. At the same time Volvo made a number of minor interior trim modifications. The 2.5T engine also received a power upgrade to 210bhp. A limited edition Ocean Race model was also offered to celebrate Volvo's exposure in yachting circles. In 2004, the XC70 received a far-reaching facelift. The key difference most will notice is a bigger 'large mesh' grille similar to the XC90 but the interior was spruced up too. Then, in the Spring of 2005 the D5 diesel engine was given a power boost from 163bhp to 185bhp as well as various modifications to make it Euro IV compliant. The 163bhp version of the engine continued to be available for a while but was renamed the 2.4D. The SE Sport trim level arrived in mid 2006 at the same time that all models got door mirrors with integrated indicators. The new XC70 arrived in 2007.

The XC70 and XC90 models are the Volvos you turn to if a basic V70 with all-wheel drive isn't quite enough to cut it for the kind of muddy excursion you have in mind. The XC70 isn't quite in the same league as the most purpose-built XC90: instead picture a V70 estate with extra ground clearance and durable body protection and you've just about summed it up. Still, the XC70 makes a good showing for itself in the showroom, with an electric driver's seat with memory controls, leather upholstery, electronic climate control, an electronic information centre and a pumped-up stereo featuring Dolby surround sound, plus Dynamic Stability Control on the petrol version. Pay a little more for SE Lux trim and you get the remainder of the options list thrown in as well. As well as a satellite navigation system with integrated television, there are electrically adjustable heated driver and passenger seats, rain sensing windscreen wipers and a headlamp wash wipe system for when the going gets majorly muddy. The dashboard looks smart, with aluminium inlays and a three spoke steering wheel. Though there are no extra passenger spaces in the estate compartment, the rear seat has been cleverly designed with a backrest that can be locked into either of two positions for maximum comfort or vital extra luggage space. Uniquely, it also splits 40/20/40 so that you can drop just the centre section, comfortably accommodate four people and still take skis or other long items. When flat, this section becomes an instant children's play table or optionally, can convert into a cooler box. Another nice touch is the heavy grille that comes down from the interior roof to partition the loading area from the passenger compartment, guarding against flying luggage or over-friendly dogs. Whichever version you choose, there's the peace of mind of Volvo's WHIPS anti-whiplash protection system and a complete complement of front and side airbags. 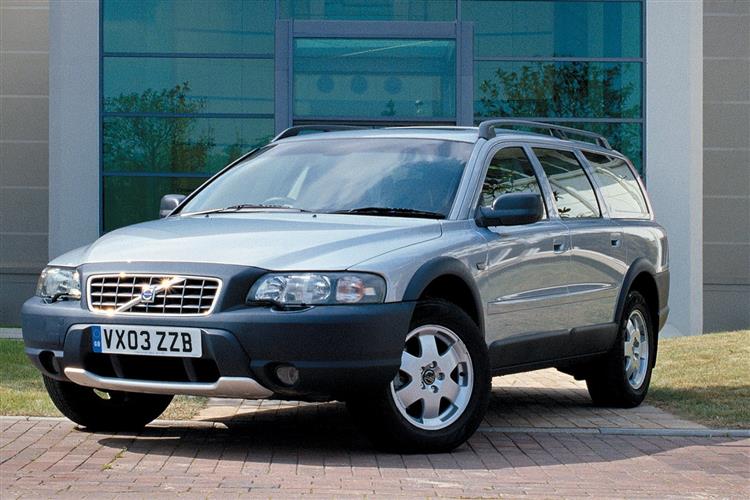