Buying a used hot hatch can be fraught with all sorts of pitfalls. Many are thrashed and crashed, some have spent more time on a circuit than on the road and there are others that promise much but fail to deliver. That's certainly not the case with Ford's third generation Focus ST. The first ST, the ST170, was lightweight and a lacking in torque. The second generation model fixed the torque but developed a savage thirst. Third time was the charm, with the ST getting a winning blend of pace and efficiency. Here's what to look for when buying one used.

It's rare for a company with the resources of Ford to find itself caught on the back foot. Yet that's exactly what happened with the 2006-era 2.5-litre Focus ST. The Blue Oval brand reckoned this family hot hatch would sell in bucketloads when it launched the car, but within a year the financial crisis had taken its toll and people no longer wanted thirsty five-cylinder 2.5-litre shopping rockets. All of a sudden, efficiency was the watchword and by 2010, this model was dead. In fact, it wasn't until 2012 that Ford was able to re-launch the Focus ST, this time a car based on the third-generation Focus body and far more of its time, if lacking a little of its predecessor's charisma. The 2012-era model's EcoBoost 2.0-litre turbo four engine was a good deal less thirsty than its predecessor - and it was quicker to boot. Less weight in the nose made it handle better as well. Ford was rewarded with the Focus ST rapidly ascending to become Europe's top selling sports hatch. In July 2013, Ford gave approval to the Mountune upgrade pack which lifted power to 275PS without affecting warranties. The ST stayed in this form until 2014 when it got a refresh.

The Focus ST continues a tradition with 18-inch Y-spoked alloys, in this case wrapped in 235/40R18 Goodyear Eagle F1 Asymmetric 2 tyres, developed after rigorous testing on all kind of road surfaces and conditions, including the N??rburgring Nordschleife in Germany. Four colours were initially offered. The signature paint finish is Tangerine Scream but you could also choose Performance Blue, Race Red and White if orange wasn't your thing. The cabin is well trimmed with a great set of Recaro sports seats with cushion tilt and length adjustment. It's good to see that Ford poured resource into all the parts you touch, with custom ST steering wheel, gear lever and pedal set. Space inside is up to the usual Focus standards with access to the rear eased by those hideaway rear doors. This ST was offered with three distinct trim options, 'ST', 'ST2' and 'ST3', which should be a trim structure familiar to existing ST owners. The 'ST' is the standard model, offering features like cloth Recaro seats, keyless start, front door scuff plates with ST logo and standard ST rear bench with centre armrest. Step up to the Focus 'ST2' and you'll find part leather Recaro seats and dual zone Electronic Automatic Temperature Control (EATC). This level also offered unique ST floor mats, automatic headlamp control, an auto-dimming rear view mirror and automatic wipers. The top spec Focus 'ST3' buillt on this with heated leather Recaro seats with 8-way adjustability and a pull out cushion, plus a Recaro rear bench. 'ST3' customers also benefitted from Bi-Xenon headlamps. A genuinely exciting alternative is the Focus ST estate because, let's face it, estates are just that little bit cooler. 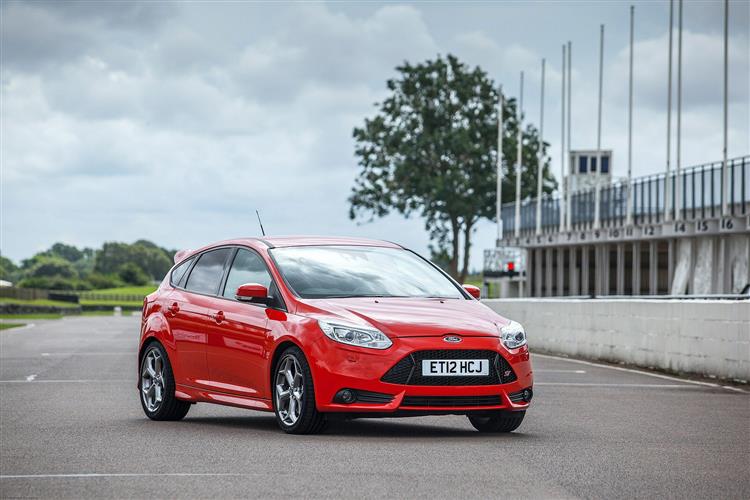