The Audi TT RS at first seems that most overt of things; a coupe or convertible with a hugely powerful 2.5-litre turbocharged engine and quattro all-wheel drive. Despite that, it's appeal is a lot subtler. So nuanced is the buyer proposition that it has managed to go over the heads of many who see the TT RS as nothing but a blunt implement. It's anything but and as a used buy it makes a lot of sense.

The TT RS followed on the heels of the TTS, the first of the go-faster second generation TT models. First shown at the 2009 Geneva Show, the TT RS was powered by a 2.5-litre inline five-cylinder engine good for 340PS. This made it by far the quickest production TT to date and it was offered in coupe and roadster guises with a choice of either a six-speed manual gearbox or a six-speed S-tronic twin-clutch sequential. In 2012 the TT RS plus was introduced. This featured an increased 360PS power output and a top speed delimiter and arrived just in time to spike the guns of Porsche's third-generation Boxster and Cayman models.

If the sound of the TT RS doesn't convince the world at large that here's a two-seater Audi with serious intent, the sight of one should. The front air-intakes yawn, the wheelarches bulge and the dramatic rear spoiler gives startled bystanders something to remember it by as it hurtles off up the road. Audi hasn't gone too far in pumping the RS full of aggression but customers who'd prefer to retain the classically truncated TT rear end can swap the fixed spoiler for one that only pops its head over the parapet when deployed by a button on the dash. Audi has got slick interiors down to a fine art and the TT RS employs the alloy pedals, flat-bottomed steering wheel and RS-branded leather sports seats that we've become used to seeing on the quickest cars in the brand's stable. There are also additional displays in the Driver's Information System for boost pressure and oil temperature, while a lap timer is also included. The RS plus got more equipment fitted as standard, including satellite navigation, Bluetooth phone preparation and Audi Music Interface iPod connection, all of which form part of the normally optional Technology Package. Suddenly the value proposition doesn't look at all bad. The Roadster model when new was pitched around £5,000 more than a Porsche Boxster S, but when you consider the amount of standard equipment Audi gave original buyers as well as the additional power of the TT RS plus, it wasn't really bad value at all. 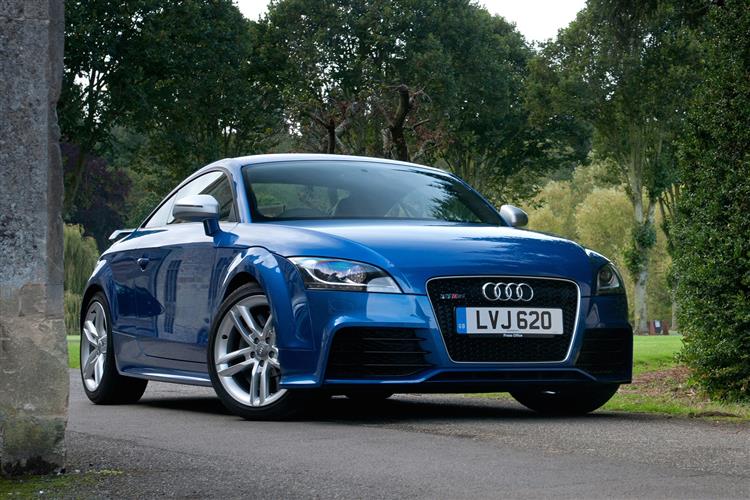