Although Wayne Rooney might disagree, old people just aren't sexy. Well, not to advertisers at least, who seem to overlook the fact that older car buyers often have more disposable income and time than many other demographics and need cars that suit their needs. Watch car ads on television and it seems that if you're anything over 35 you're invisible to car manufacturers. Toyota's Verso-S bucked this particular trend, aimed fairly and squarely at what they call 'empty-nester; those whose kids had left home and who wanted a car that was practical, reliable, easy to drive and which didn't draw a whole lot of attention to itself. These are all solid justifications for bringing the Verso-S to market, but its chances were torpedoed by some hugely optimistic pricing on Toyota's part. Still, the secondhand market makes its own assessment of a car's inherent worth. Does the Verso-S redeem itself second time round?

Marketing people aren't short of terms designed to describe our age group and buyer profiles. Generation Xers, baby boomers, DINKYs, boomerangers; you're probably on a database somewhere labelled as some such. The Toyota Verso-S was aimed at empty-nesters but if there's one thing that unites senior citizens with money it's that they probably didn't get to that position by blowing their hard-earned on overpriced products and when the Verso-S appeared it opened at around £14,500 for a 1.3-litre petrol model which seemed a lot of money. By contrast a Kia Venga was retailing at around £11,500 which was enough to asphyxiate sales of the Verso-S before it ever had a chance. Its predecessor, the Yaris Verso, carved out a profitable niche amongst customers who needed space and reliability but didn't hanker for horsepower or, for that matter, sassy styling. The Verso-S looked a good deal more conventional than the old Yaris Verso but was a whole lot smarter. Unlike the Yaris Verso, it couldn't be cheaply and easily converted for wheelchair users which capped off that niche a little. The Verso-S's dismal sales convinced Toyota to do the humane thing and withdraw it in 2013 with no replacement in the immediate offing.

What You Getword count: 333

Given that the Verso-S measures a mere 399cm from stem to stern, it's incredible what Toyota has managed to cram into it. To put that figure into perspective a Ford Fiesta is a mere 4cm shorter. With the rear seats and parcel shelf in place, there's 429 litres of luggage space on offer, which dwarfs the Ford's 295 litre hatch. The rear seats of the Verso can be folded from the luggage bay by using levers on each side and once the seats go down, there's up to 1388 litres of space available. The luggage bay features a concealed floor where valuables can be kept. The floor itself can be raised level with the hatch lip for sliding heavy items in or with a tip and a flip can be lowered for ultimate carrying capacity. There's a decent amount of space inside the car, with rear legroom better than most supermini hatches. The impression of space is helped by the vast full length panoramic glass roof fitted to the T Spirit model which really does add to the experience of travel. Passengers will be able to take in city architecture, indulge in amateur ornithology or just gaze at the passing sky. It's a feature that sets the Verso-S apart from virtually all its rivals. As you would expect from Toyota, build quality is strong without being showy. The central feature of the dash is a big 6.1 inch touch screen display which again gives the Verso-S the feel of something a little removed from the mainstream norm. Equipment levels are strong, as you might reasonably expect. Two trim levels were offered, TR and upspec T-Spirit, with most buyers paying the £1,100 premium for the better-equipped version. For that, customers receive 16-inch alloy wheels, rear electric windows, rear privacy glass and the panoramic glass roof. The TR isn't at all badly appointed, with the Toyota Touch multimedia system, Bluetooth, air conditioning, a reversing camera and leather trim for the steering wheel and gear knob. 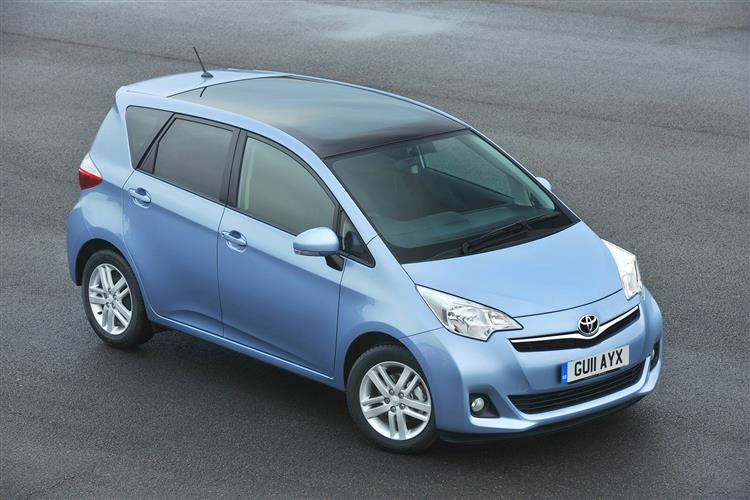