ALL YOUR DUCS IN A ROW (some text hidden)

With well over two million examples built across a production run that stretches back over four generations to 1981, Fiat's Ducato is the large van that a huge number of European business buyers turn to when size really matters. The keys to its success are many but flexibility is surely one, the Italian designers having been able to create this LCV in over 2,000 different forms. Fiat's Professional van network in the UK certainly wouldn't be without this model, representing as it does an enormous part of their annual British sales. That's in contrast to the Peugeot and Citroen models that share this Ducato's basic design, vans sold and marketed by brands whose real experience and expertise lies with much smaller LCVs. Fiat, on the other hand, claims to understand the needs of large panel van buyers much better - as it has had to for this van to compete successfully not only against Ford ubiquitous Transit but also against other competitors of the quality of the VW Crafter/Mercedes Sprinter package and the more recent Renault Master/Vauxhall Movano design. In other words, this Italian contender needed to be good. Here's what to look for when shopping for a used example.

Whereas in the UK we have long been wedded to the idea of a ford Transit as the default large panel van, move to more southerly climes in Europe and it's wall to wall Fiat Ducatos. It's been that way since the first generation model was launched way back in 1981. The second generation van was launched in 1994 and saw service right through to 2006, being also rebadged as the Peugeot Boxer and the Citroen Relay. Even when it was finally replaced, the second generation Ducato accounted for fully two-thirds of all Fiat's LCV sales in the UK. The model we concern ourselves with here hit the UK market in October 2006 and has been steadily updated and developed since. When it first arrived, customers got the choice of three diesel engines, one trim level, four body lengths, eight load volumes and three roof heights. The version we're looking at here is the updated version, introduced in 2011, which got a much plusher more car-like interior. In February 2012, Fiat launched the Tecnico trim, which featured air conditioning, front fog lights, Blue&Me with steering wheel controls, TomTom predisposition on the dashboard, B&M TomTom Live navigator plus cradle, Start&Stop, special wheel trims, reverse parking sensors and eco:Drive Professional software. It wasn't offered on many variants tough, with just the 30 L1H1 and the 35 L3H2 versions getting the extra kit. ESP stability control was added to all models as standard in June 2013. These versions of the Ducato continued to be sold until its replacement with a facelifted version in 2014.

As you'd expect, there's a wide range of body sizes available with four lengths, three different wheelbases and three roof heights. These allow a range of load volumes that extend from 8 m3 up to a truly sizeable 17 m3. The Ducato can manage some seriously hefty cargos as well, with gross vehicle weight platforms of 3.0, 3.3, 3.5 and 4.0-tonnes. Gross payload varies between 1115 and 1850kgs. Plus there's a wide range of body styles on offer which include the Combinato 9-seater MPV, single or double cab options and 17-seat minibuses as well as the usual factory-built conversions that create chassis cab, crewcab, tipper, dropside and Luton derivatives. The motorhome market is also especially important for Fiat, who are multi-time winners of Which Motor Caravan's base vehicle award. Perhaps that's why two out of every three camper vans sold in the UK are based on Ducato chassis cab bases. Standard equipment features across the range include remote central locking with deadlocks that allows you to lock and unlock the cab and load area separately and activates once the vehicle is moving, an MP3-compatible CD stereo, electrically adjustable and heated door mirrors, power windows and 12v power sockets in both the cab and the loadbay. You also get useful interior lights just above the door openings. Optioned-up models will feature things like a fixed full width steel bulkhead, a second sliding side door, self-levelling suspension, the ceiling-mounted cab storage shelf, 270-degree rear door opening, larger door mirrors, a larger fuel tank, a heat-resistant windscreen, parking sensors, supplementary heaters, a shock-absorbing driver's seat and Fiat's clever Microsoft-developed Blue&Me telematics system that includes Bluetooth 'phone connectivity. Safetywise, you only get a driver's airbag in the basic tally, but original buyers could specify passenger, side and curtain 'bags from the options list. 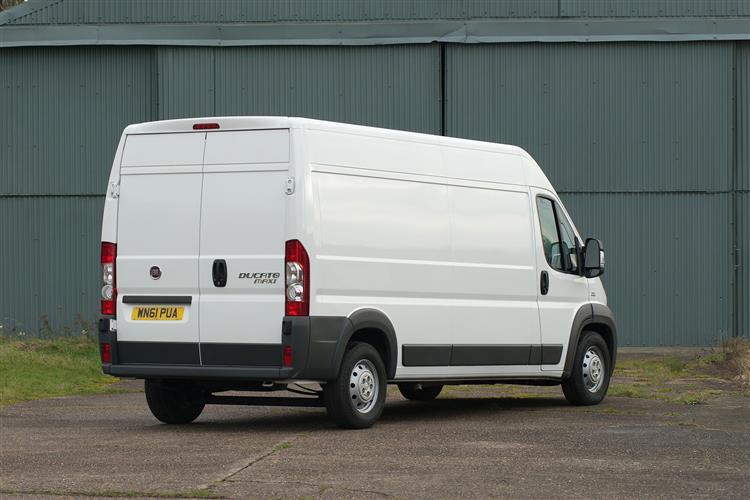