Buying a middleweight panel van used to be easy. You bought a Transit. That was before the turn of the century when Renault introduced its second generation Trafic and alongside it came the rebadged Nissan Primastar and the Vauxhall Vivaro. Suddenly the van marketplace was a whole lot fiercer. Here we take a look at Renault's LCV contender and assess whether a used example has just as much going for it.

Yes, we could go right back to 1981 when Renault first introduced the Trafic van but if you can still find one of these early vans in serviceable condition, you can count yourself extremely lucky. You'll be luckier still if you find one of the post-2001 models as they're simply a better van in every measurable regard. Despite the Vauxhall and Nissan sister vehicles, make no mistake; this was very much a Renault design. Although versions were built in Luton and Barcelona, the Trafic was designed at the Renault Technocentre near Paris and the detailed engineering was performed by Renault's LCV team at Villiers-Saint-Frederic. There was a key change in 2006 when Renault introduced a range of greener 2.0-litre CDTi Euro IV-compliant models, but we'll focus here mainly on the models introduced from 2010 onwards, the so-called 'Trafic Phase 3'. These continued to be sold right through to 2104, when an all-new Trafic van was introduced.

The avant garde shape which rolled down production lines in both Luton and Spain still works as well as the day this design first hit the market in 2001. The distinctive domed roof makes the vehicle easier to enter and improves side visibility. Other careful touches include the large front bumper with its integrated turn indicators and fog lamps, sitting just below the large, clear-glass headlamps. At the rear, the tail lights extend high up towards the roof from the rear bumper for better traffic visibility. Build quality isn't quite as strong as you'd find in a Mercedes Vito or a Volkswagen Transporter - but then, you're not paying that kind of money. Inside the cab, it's all very car-like - as you'd expect from a modern van. There's theoretically room for three at the front but in practice, the gearstick gets in the way of the middle seat, even though it's dash-mounted. Stuff we like includes the hook for your Friday night takeaway, the one-button locking for all the doors and the remote controls for the stereo off the steering wheel. The equipment list includes practical options like keyless-entry central locking and a useful load-securing system that offers sliding fastening points for your cargo. Obvious rivals apart from this design's Nissan Primastar and Vauxhall Vivaro clones include Ford's Transit, Citroen's Dispatch, Fiat's Scudo and Peugeot's Expert. As you might expect, there's a wide choice of variants on offer. The basic selection is between two wheelbases (short and long - 3098mm and 3498mm), two roof heights (short and high, 1.96m and 2.50m) and various body types: panel van, refrigerated panel van, platform cab, a double-deck dropside and a 9-seat minibus. If you need to transport both people and packages, there's also a popular six-seat Trafic Crew Van variant, offered in both short and long wheelbase versions of the low roof models, with a load area of up to 4m??. The best selling model in the preferable later 'Phase 3' model line-up was the SL (short wheelbase, low roof) panel van version and the trim level most in demand on the used market is the Sport version. Aside from the model's full steel bulkhead, remote central locking with deadlocking and R.A.I.D. system (Renault Anti-Intruder Device door locking above 5mph), the Trafic Phase 3 range offered as standard two business user must-haves: Bluetooth and Carminat TomTom satellite navigation. Top-of-the-range Sport models got 16" alloy wheels, air conditioning and essential chilled glovebox, driver armrest, electric windows and door mirrors, metallic paint and multi-function trip computer. Crew Van versions boasted left and right side glazed sliding doors, a removable rear seat base and integral bulkhead with glazed panel. Key options included auto lights and wipers, three-button key with selective door opening, ESP, and (unusually on a panel van) climate control. 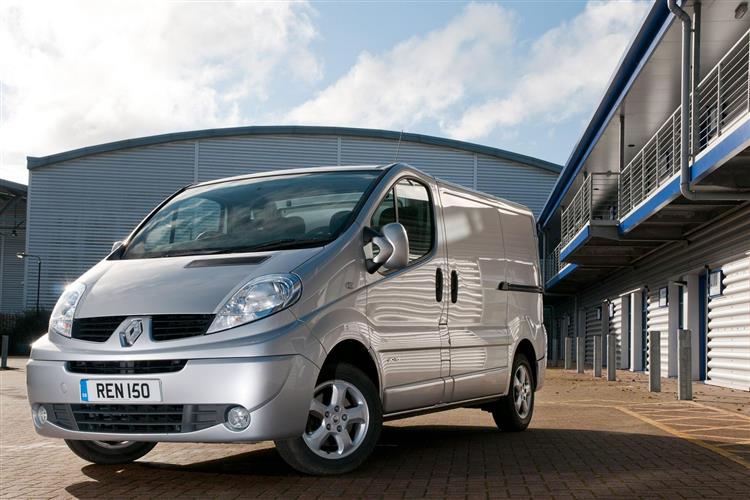