The California was a car that Ferrari needed to build. Leveraging economies of scale with sister company Maserati and infilling beneath the increasingly expensive mid-engined V8 models, the California offered a more affordable route to Ferrari ownership. Although it'll never be remembered as one of the classic Maranello shapes, the California can only be judged a success in that it boosted sales and opened up new markets to its maker without diluting the brand equity. Here's how to track down a used one.

Think Ferrari and you'll often think of the no-compromise sports cars that have acted as the halo products - cars like the F40 or the beautiful GTO models. Beautiful designs with terrifying reputations that seemed to embody all that's impossibly exotic about this most storied of supercar builders. Yet despite the legends, it's often been the more prosaic Ferrari models that have kept the company afloat. If indeed you can imagine a 'volume' car in such a line-up - and all things are relative - it's vehicles like the 246GT, the 308 and the 355 that have made the biggest impact on the company's bottom line. With the advent of the Ferrari 360 Modena, the Italians started to realise that a junior supercar arms race was kicking off. That escalated with the launch of the F430 and plans were laid to introduce a more affordable Ferrari that would slot in beneath that design and its successor, the 458 Italia. That car was the California. Named after the Italian marque's now almost priceless 250 GT California of the late 1950s, it was first shown at the 2008 Paris Motor Show. A persistent rumour that this car was to have been a Maserati has been denied by Ferrari, who nevertheless built a new production line at the Maranello factory to accommodate its build. With a capacity of 6,000 vehicles per year, it's easy to see how the California is viewed with some pride by Ferrari senior executives. It introduced a number of firsts for Ferrari. It was the first Ferrari with its V8 mounted in front of the cabin rather than behind it. The first with more efficient direct injection. The first to feature a double-clutch sequential semi-automatic gearbox. And perhaps most noticeably, the first to feature that trendiest of modern sports car features, a folding aluminium roof. A big early change to this generation car came in 2012 when Ferrari reduced 30kg from the body and added 30bhp to the power output, lifting it to 486bhp. The company also offered a Handling Speciale Package, which included Delphi MagneRide magnetorheological dampers. These units increased the steering response by 10 per cent and were teamed with stiffer springs and revised engine management software. The California was updated with the significantly uprated California T for the 2014 model year.

The California's styling initially attracted quite a bit of negative comment, especially concerning the perceived heaviness of the lines around the rear end, but as time has passed, it's become a bit easier on the eye. While you'd never describe it as particularly svelte, the California has a certain handsomeness about it and it integrates the folding hard top roof very cleverly. The retracting two-piece metal-folding roof takes just 14 seconds to do its electro-hydraulic thing. At the wheel, it's all beautifully fashioned, the days being long gone when Maranello machines featured Fiat switchgear and cheap plastics. The Italian brand describes the California as a '2+', which is a reference to the fact that the area directly behind the front seats can either play host to a couple of tiny occasional seats or an optional luggage shelf. Either way, should you need extra space, two flaps fold down to allow longer loads to creep through from the boot, increasing the capacity from 240 to 340-litres. Virtually all California customers specified the optional seven-speed dual clutch semi-automatic gearbox and it suits the car's personality better than the manual model. In fact at one point, Ferrari UK claimed that they had only ever sold one manual California. 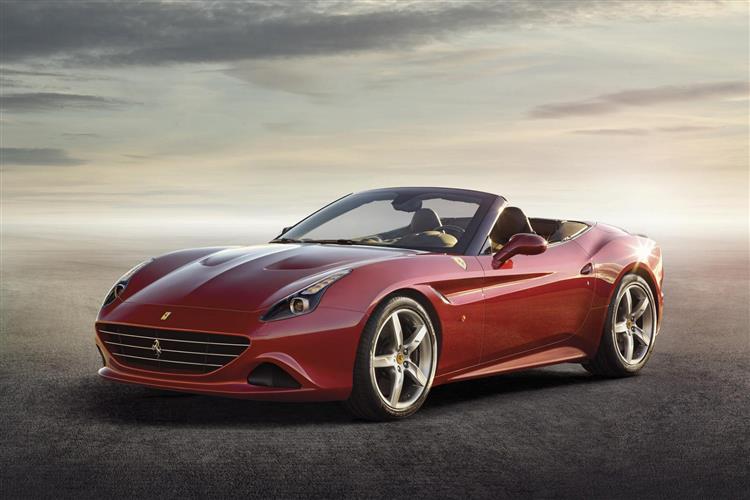