It's difficult to consider the Mercedes-Benz C-Class in isolation. This is a car that's inextricably linked to two other vehicles, the BMW 3 Series and the Audi A4. Whenever one of these models steals a march on the other pair, there's a furious scuffle to reclaim lost ground. Unfortunately for Mercedes, it has found itself in the position of playing catch up too often, and the C-Class sits on the third step of this particular podium, in UK sales at least. On the Continent, it's a different story and the Mercedes puts a sound leathering on the A4 and even outsells the 3 Series in some markets. The third generation C-Class has always been a popular pick with used buyers. Here's how the late facelifted versions of this car stack up.

The year 2007 was pivotal for Mercedes. This was the time that, after fourteen years in the shadow of the BMW 3 Series, the C-Class finally stepped out and asserted itself. For so long, too many aspects of the C-Class had been a copy of BMW's strategy, yet it felt like a car without a great deal of personality that was leaning on rather than enhancing that three-pointed star. In March of 2007, we got the W204 version, the third generation C-Class, and it delivered a return to reassuring quality and driver appeal. Stuttgart was back in the game. Fast forward to July 2012 and Mercedes had enjoyed over five years of solid service from the C-Class. It decided to offer it a light refresh for the last couple of years of its life. In came a more efficient 1.6-litre turbocharged petrol engine at the base of the range, while the mighty 6.2-litre C63 AMG remained unaffected by the 2012 model changes. This most modest of facelifts lasted the C-Class through to its 2014 replacement with an all-new car.

The 2012 refresh wasn't the most extensive piece of remedial design, but then it didn't need to be. The C-Class's lines had aged well and the technology had been incrementally improved throughout the car's life. There were new interior and exterior features, including revised colour options, repositioned cruise control and indicator stalks and easier-to-read silver graphics for the telematics screen. The telematics system in conjunction with Mercedes-Benz COMAND now included eCall to report the car's position to a call centre via GPS in the event of an emergency. The revised trim structure started with Executive SE and then ascended to AMG Sport and AMG Sport Plus, with the C63 AMG saloon and estate sitting somewhat conspicuously at the top of a petrol engine range that went 1.6-litre, 1.8 litre, 6.2-litre. 'Executive SE' variants offered a sports grille, new 16-inch alloy wheels, Artico upholstery and LED daytime running lights at a price increase of only £35 over the previous SE grade. A Luxury Package was offered for Executive SE models to replace the former Elegance trim option. This carried a £2,000 premium and included the three louvre grille with bonnet-mounted star, 17" alloy wheels with a seven twin-spoke design, automatically dimming rear view mirror and folding exterior door mirrors, chrome trim on the side, rear and shoulder line, a storage package and brown Ash wood trim with a matt finish. The previous Sport trim was ditched for two new variants; AMG Sport and AMG Sport Plus. The AMG Sport Saloon and Estate cost £960 less than the previous Sport models, and featured 17-inch AMG wheels and halogen headlights. For another grand you got AMG Sport Plus, which featured 18-inch bi-colour AMG alloys, bi-Xenon front lights with Intelligent Light System and Adaptive High Beam Assist, AMG sports seats, Black Artico/Dinamica upholstery with contrast red stitching, red seat belts, AMG floor mats with red edging and silver gearshift paddles on the automatic models. Otherwise things were much as before. The W204 third generation C-Class is a bigger car than the model it superseded, 45mm longer in the wheelbase and 42mm wider overall. Legroom is generous in the back but passengers over six feet tall may have an issue with the amount of headroom available. The boot capacity is a sizeable 475 litres and the lid opens nice and wide to enable larger items to be lowered inside. With the estate body style, as tends to be the case in this sector, the actual load volume with the seats in place is only marginally superior to that of the saloon (485-litres instead of 475) but the shape and adaptability of the space, not to mention the improved access, bring definite advantages. With both sections of the rear bench folded down, there's a maximum of 1,500-litres to be exploited, along with a maximum load length of 2.82m, 17cm more than in the previous generation C-Class Estate. 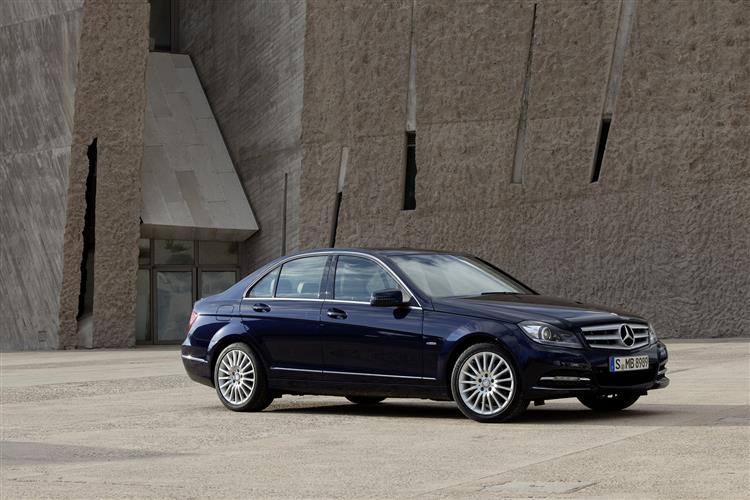