Scan the list of Mercedes-Benz models and you see some surefire classics. The C-Class, E-Class and S-Class saloons obviously, and the SL and SLK sports convertibles. Then there are the ones just bubbling under that are nevertheless laden with talent, into which bracket you could probably put the M-Class SUV, the CLS four-door coupe and the A-class and CLA-class twins. You could probably make the case for a couple more categories before you arrived at what could best be described as Miscellaneous Curiosities, into which you'd place GLs, Vianos and this car, the R-Class. The car we look at here is one of the late shape facelifted models that Mercedes took a good look at in 2011. Can one of these later R-Class variants represent a decent buy second time round? Read on to find out.

The R-Class is a car that the market never really understood or took to. On paper there was not a lot wrong with it. It was a sports tourer with the option of rear or all-wheel drive, standard or long-wheelbase bodies and a decent selection of engines. First arriving in 2007, it was almost instantly overlooked in favour of more traditional estates and SUVs. The fact that the standard-length body was cramped in the back and the long-wheelbase car looked ungainly probably did for the R-Class' chances; that and the fact that it was expensive and heavy so fuel economy was never quite as impressive as it should have been. Undeterred, Mercedes took the axe to the range in 2011, culling it down to just two models while tweaking the styling. Its horizontally structured bonnet offered a more harmonious frontal appearance and the front wings, radiator grille, headlamps and bumpers were all redesigned. Trendy LED daytime running lights were added into the bi-xenon headlamp units. The car was finally discontinued early in 2014.

What You Getword count: 398

Even the most loyal advocates of the original version of this car would have to concede that its rather awkward front end styling didn't exactly help its sales prospects. If that put you off this car in the past, then you might like the slicker exterior detailing of this facelifted car. Where this model really scores is inside. It's very comfortable, at least if you've gone for the long wheelbase R350 CDI version, a design bigger than a huge Mercedes S-Class luxury saloon. If that really pricks your green conscience, then you can order an R-Class in standard wheelbase R300 CDI form but it's still around 5 metres in length. Anyway, to do so misses the opportunity to turn the third row of seats into everyday usable adult berths rather than occasional kiddie seats. Mind you, it's one thing making a car big: quite another to make it as versatile as this one. Around 64% of its body length is available to occupants, with up to 1027mm of rear headroom, giving a sense of airiness to the cabin that Executive estates and luxury 4x4s simply can't match. Doors bigger than those of Mercedes' Maybach limousine open to reveal a level of practicality that would shame some large MPVs. The three-person bench in the middle row sits a decent 920mm ahead of the twin seats behind and since it slides back and forward, you can extend that gap further to 990mm if someone particularly long-legged has been confined to the very back. Access to the third row is a bit awkward unless the middle seat is pushed well forward but you quickly get used to it. More of an issue is that fact that with seven on board, the high floor necessitated by the 4WD mechanicals means that there's just 266-litres of luggage space, so you'll be limited to a couple of big bags - though there is a bit of extra space to conceal valuables under the boot floor. Of course, if your focus is on packages rather than people, you can quickly create removal van levels of space. The two rearmost rows of seats fold flat into the floor enabling a massive 2,385-litre load capacity spread across a vast 2286mm-long loading platform. Try finding an estate car that can match that. Even the biggest one we can think of - Mercedes' E-Class Estate - has only 1910-litres. 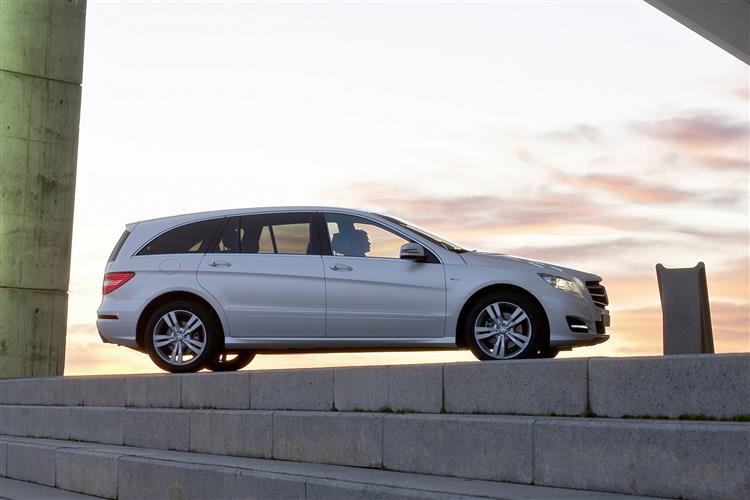