The compact estate sector is where vehicular makeweights generally go to die. It's usually been populated by the ungainly, the underwhelming and the unappetising; automotive runts that appeal to a small market. Every once in a while, however, we get a rare bit of talent in the class and just such an example is the Peugeot 308 SW. If your last experience with a compact Peugeot estate was a 206 or a 307, then you're a forgiving type to have even made it this far. Rest assured, that Peugeot upped its game quite dramatically for the 308 SW when it first appeared in 2008. The car was facelifted in 2011 and it's these updated and improved cars we take a look at here. You might have sworn off used French cars for good. Does this unassuming load lugger have what it takes to bring you back to the fold?

Things have changed since, but back in 2008, while other mainstream car manufacturers were developing compact MPVs with seats that slid, folded, reclined, tumbled and generally contorted into a fantastical array of configurations, Peugeot watched from the side lines like a school boy who'd left his PE kit on the kitchen table. Back then, car buyers striding into one of the French manufacturer's showrooms ready to be stupefied by the latest feat of MPV interior origami would have been pointed in the direction of this car, the 308 SW. Not an MPV but a small estate with a couple of extra seats in the boot. The disappointment must have been tangible but once the customers had been dissuaded from walking out, closer inspection would have revealed that this extended 308 really did have something to offer. And it still does. Today, Peugeot is a very different brand, with plenty of purpose-built MPV options but for many families, this 308SW would still probably be a better fit. Especially since it was significantly improved by a wide range of far-reaching changes in the summer of 2011 that made it smarter, better equipped and more cost-effective to run.

What You Getword count: 190

This might be a compact estate, but it's less compact than most - as it has to be to accommodate the optional two extra fold-out seats you can have fitted into the luggage bay. The 2011 styling updates brought this car a shorter nose, a smaller front grille, a more compact front bumper, sleeker headlamps and extra chrome detailing, notably on the rear. All of which combine to offer a more cohesive look that the French brand also hoped would have more of premium feel, something further aided by flared front wings that now include a pair of curved LED running lights, apparently arranged to try and imitate the claw slash of a lion. If you're not using the luggage bay for people, then it offers 600-litres of space, far more than you'd get in something apparently bigger, like, say, an Audi A4 Avant. Usefully, if you've only small bags to throw in, the loading bay is accessible by simply lifting the rear tailgate glass. If you need to transport really large loads, pushing forward the split-folding rear seat back will free up a total of 2149-litres of fresh air. 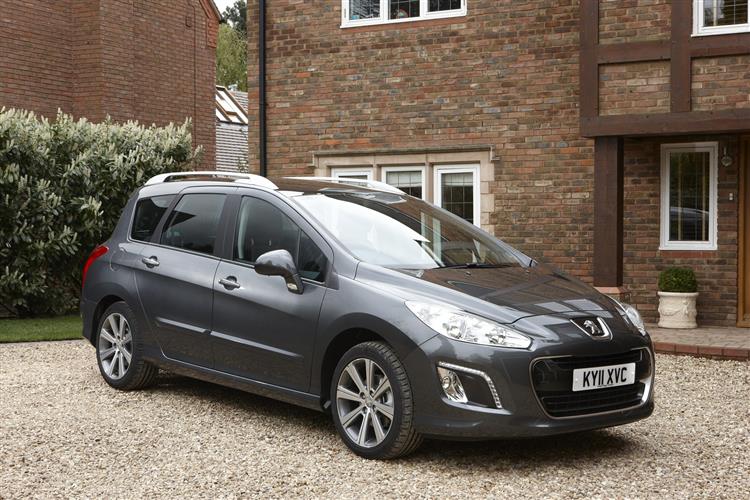