There are trendier kinds of car to get about in than medium range family saloons and hatchbacks. These are the models that evolved to feed the fleet sector's insatiable appetite for roomy, comfy and cheap company cars but have slipped from favour a little as company car users have been turned on to alternatives that cut more of a dash in the office car park. Despite this, there's still a lot to be said for the old medium rangers, particularly on the used market once the old enemy depreciation has taken its toll. A pre-owned Vauxhall Insignia could prove to be all the car most families ever need.

The final Vauxhall Vectra wasn't a bad car but by 2008 it had become a byword for all that was staid and formulaic about traditional medium range family saloons. Vauxhall sensibly decided to ditch the name and christened its replacement the Insignia. The newcomer was a marked improvement but it needed to be, with the fleet customers who had always propped up this area of the market increasingly being drawn away in the direction of compact executive saloons and the growing crop of compact 4x4s. The halcyon days of the medium range family car looked to be over almost as soon as it arrived but with its core qualities of size, space and long-distance comfort the Insignia continues to be a safe bet. The Insignia was launched in the later stages of 2008 with a comprehensive line-up of engines and a choice of saloon or hatchback bodystyles. A 1.8-litre normally aspirated unit and a 2.0-litre turbo formed the basis of the petrol line-up although a 2.8-litre V6 turbo was also offered to top the range. The all-important diesels were both 2.0-litre CDTi units, one with 128bhp and the other with 158bhp. Trim levels were the familiar Vauxhall ones of S, Exclusiv, SE, SRi and Elite. When the Sports Tourer estate model arrived in Spring 2009, two more engines were introduced. These were a 1.6-litre turbo unit with 178bhp and another 2.0-litre CDTi diesel with 187bhp courtesy of twin turbochargers. The high performance VXR variant was launched in September 2009 with a version of the 2.8-litre V6 turbo engine generating an eye-opening 321bhp.

What You Getword count: 429

Unlike the non-descript Vectra that preceded it, the Insignia tried for a dynamic, head-turning appearance and isn't unsuccessful. The five-door hatch and four-door saloon versions are nigh-on impossible to distinguish at a glance. Both have the same bowed roofline which drops dramatically towards the rear and, perhaps the Insignia's signature stylistic device, the "blade" feature that's cutaway behind the front wheelarches. At the front, all Insignia models feature a bold chrome grille with the Vauxhall griffin badge at its heart. It sits on a raised centre section which runs down through the bumper and up to merge with the lines of the Insignia's fluted bonnet. The result is as easy on the air as it is on the eye with Vauxhall claiming the sector's best aerodynamics of 0.27Cd, which was one of the most slippery shapes of any car when the Insignia was launched. The Insignia's styling must be deemed a success in the context of the often mundane medium range sector but the designers were also intent on delivering practicality. The car is 21mm longer than the old Vectra at 4,820mm, and 50mm wider. The Vectra wasn't a cramped offering itself but the Insignia improves passenger space partly through these larger exterior dimensions and partly through a wheelbase that's extended by 35mm. The cabin was set out to be as eye-catching as the exterior. The Vectra was always worthy but dull and the Insignia has a number of features with the potential to set tongues wagging. The dashboard top wraps around at the sides in a steady curve that melts into the door linings. The effect is that the driver feels cocooned inside the car. The mood is helped by adaptive ambient lighting and a massive amount of attention has also been paid to the seats which have been specially designed to set new standards for ergonomics, comfort and safety. The range theoretically opened at 'S' level, but that was really a low-spec fleet-orientated model. For most private buyers, the entry-level point to Insignia motoring was at ES or Exclusiv levels and this is where used buyers should start the hunt. Exclusiv offers a decent level of standard equipment that runs to ABS brakes and ESP stability control, automatic headlamps, electric adjustment of the driver's seat height and lumber support, single-zone air conditioned climate control front, side and curtain airbags and even cruise control. Above this level sit SE, Elite and sporty SRi variants. If you want four wheel drive, it was an option on the 2.0-litre petrol or diesel models and standard on the 2.8-litre petrol V6. 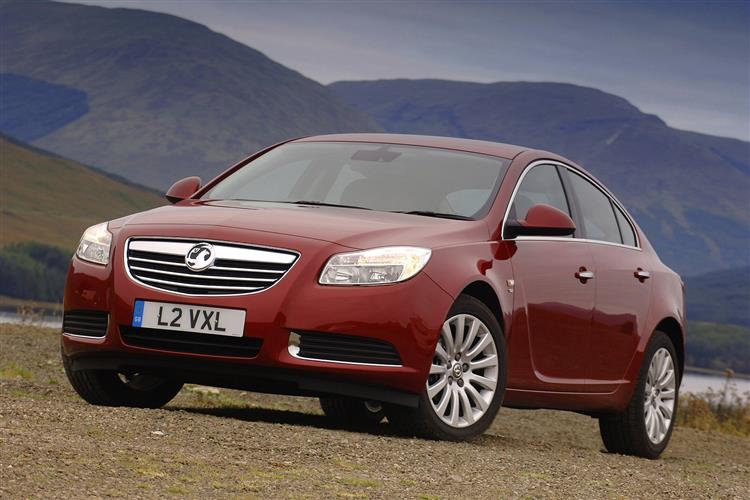