Buying a used 4x4 can often be a fraught process. They're often mechanically complex vehicles that may or may not have lived a very tough life. Obviously it helps if you limit your used shortlist to just those vehicles that score well in customer satisfaction surveys. If that is indeed the case, you can't afford to overlook the Land Rover Discovery 4. Not only does it mop up just about all the gongs as far as new car awards go, but it also makes a cracking used buy.

Let's not mince words here. Land Rover Discoveries 1 and 2 were horrible things. The Discovery 3, introduced in 2004 was like a bolt from the blue. Almost everything that was mediocre, parochial and lazy about the design of the previous cars was blitzed with modernity, boldness and style. The Discovery 3 wasn't perfect though. Your engine choice amounted to thirsty or slow, initial reliability niggles took the edge off its used reputation and it proved a victim of its own popularity to a degree, used prices not holding station as many thought. Still, when the sums were totted up after a typical three year ownership period, it was often cheaper to run an initially more expensive BMW or Mercedes SUV. The Discovery 4 underwhelmed a lot of industry observers when it appeared in 2009. Many were expecting another great leap forward. What we seemed to get was a Disco 3 with the grille from a Range Rover Sport. The big news came under the bonnet. Yes, the unspectacular 2.7-litre TDV6 turbodiesel soldiered on, but it was augmented by the addition of a 242bhp 3.0-litre TDV6 unit that bettered the 2.7-litre diesel by 29 percent (power) and 36 percent (torque) respectively. At 600Nm, the torque output of the diesel was, at the time, the highest of any six-cylinder passenger car diesel in the world, but with nine percent improvements in economy and CO2 emissions over the 2.7-litre V6. Finally, the Discovery had the engine it deserved and at just a £2,500 price step up from the equivalent 2.7-litre, it made financial sense too. Thing is, it didn't last very long. It was replaced in 2011 by the 245bhp SDV6, which was fitted to a special edition model that appeared in November of that year. The Landmark edition was finished in either Santorini Black or Fuji White and featured 20-inch alloys and an elegant black/white contrasting theme throughout. Definitely more for the Kings Road than the Silk Road. The 2012 Discovery 4 got a decent working over, the key change being the addition of a new ZF 8-speed automatic transmission, improving efficiency and helping reduce CO2 emissions on the 3.0 SDV6 diesel from 244g/km to 230g/km. In conjunction with the new transmission, the Discovery 4 was also equipped with the 'Drive Select' rotary gear shift and steering wheel-mounted paddle shift. Power crept up from 245 to 256bhp. In addition to the driveline improvements, the Discovery 4's design and equipment levels were refreshed too. Buyers got two different alloy wheel designs, three option packs and improved audio and navigation systems based on the latest electrical architecture. The Discovery continued largely unchanged henceforth to the end of 2013 when a restyled 2014 model year car was announced. What You Pay (used_pay)

Inside, the cabin quality is reassuringly strong, with lots of stitched leather and soft-touch plastics, plus keyless go which offers push-button starting. The Terrain Response console takes pride of place in front of the gear lever, there are useful controls on the steering wheel and a neat touchscreen cuts down on the need for so many switches and buttons. At the back, there's decent head and legroom, whilst the foldaway third row is very cleverly done, easy to erect and big enough for adults. As for luggage room, there's 1192-litres with all the seats in place, then the second and third rows fold down to leave a flat floor with 2558-litres without the need to remove the headrests, while in true Range Rover style, the tailgate is split so you can use it as a picnic seat or a viewing platform. The various control systems are marshalled via the centrally-mounted touch screen display and the driver gets a second LCD display mounted in the instrument cluster through which major functions can be accessed via the steering wheel-mounted controls. The Portable Audio Interface allows all manner of MP3 players and USB devices to be connected and there's a DAB radio option too. The headlights incorporate a High Beam Assist function that activates the full beam headlights when light levels are suitably low. It then detects the lights of oncoming vehicles and dips the beam when necessary to avoid dazzling other drivers. There's also the option of a Surround Camera System consisting of five cameras that give a near 360-degree view around the vehicle on the central display screen. 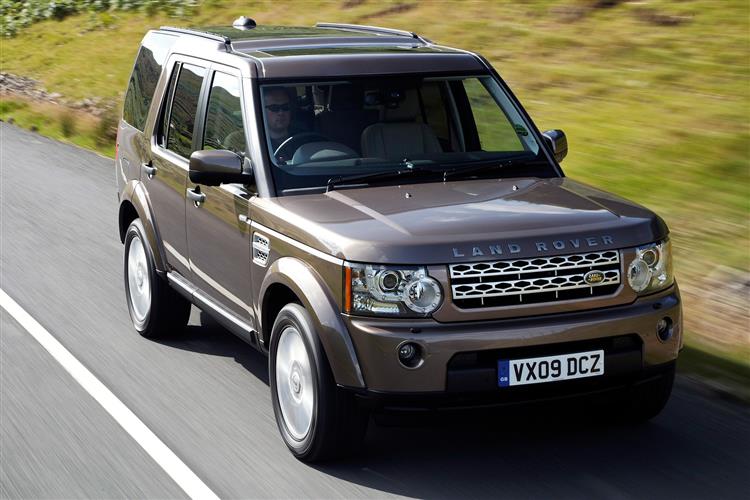