The rise of the so-called 'soft-roader' has been one of the key motoring trends of the last few years. Largely kicked off by the success of cars like the Suzuki Grand Vitara and Toyota RAV4, the sector became typified by the market leading Land Rover Freelander and was soon populated by cars like the Ford Maverick, the Hyundai Santa Fe and the Mitsubishi Shogun Pinin. One car, however, stands above them all as the best in class. The Nissan X-Trail was a relative latecomer to the market but benefits from avoiding many of the mistakes earlier cars made. Refined on road and relatively capable off, it blends smart design with MPV-style practicality. If you're the sort of person who has never been able to see the point in this genre of car, take a drive in an X-Trail. If it can't convince you, nothing will. For those already converted, the X-Trail makes a bulletproof used proposition.

The X-Trail range was launched in October 2001 with a choice of either 2.0-litre 138bhp petrol or 2.2-litre 112bhp turbo diesel engines. Trim levels ran from S through Sport up to range-topping SE+. Garnering instant critical acclaim for the boldness of its interior styling and the quality of its chassis, the X-Trail went on to notch up steady, if unspectacular, sales. Britain's leading off-road magazine '4x4' voted the X-Trail the best soft roader two years running and in 2002 the range was bolstered by the addition of the 165bhp 2.5-litre SVE version, a car that took aim at V6 versions of the Land Rover Freelander and Ford Maverick. The end of 2003 saw the mildest of mild facelifts with a slimline front bumper along with new light clusters front and rear. Further changes were made at the beginning of 2005 but these were fairly insignificant and the vehicle still looked largely the same. More important was the addition of entry-level 4x2 X-Trail models and the increase in power for the 2.2dCi engine to 136bhp. The range was altered for the 2006 model year with Columbia and Aventura trim levels taking over from SVE and T-Spec at the top of the line-up. Details of the all new X-Trail, which looks spookily similar to this one, arrived in mid 2007.

What You Getword count: 242

Although an 'extrail' sounds like something that would have you quickly flipping the page of Gray's Anatomy, Nissan's interpretation of the compact SUV theme is pretty inoffensive. The massive headlights are probably the most striking design feature, but the detailing is neat, the stance purposefully chunky and the bloodline looks more like a scaled-down Patrol than a latter-day Terrano II. With chrome touches on the grille, tail and door handles, the X-Trail leaps into a commanding lead over the Land Rover Freelander and Ford Maverick in the shininess stakes. Although it's tempting to bring a premature close to this contest with the Nissan ahead on points, it would be a same not to explore the X-Trail's potential a little further. Where the Nissan strides ahead of the Ford and the Land Rover is in terms of interior design. Yes, we appreciate that it's a Japanese car, and it's interior is expected to be about as chi-chi as a McDonalds staff room, but bear with us here. Loads of space, a big tick in the oddments space box and some beautifully judged trim colour combinations make the Nissan as good as it gets in this sector. The centrally mounted instruments give the fascia a wonderfully symmetrical look spoiled only by a steering wheel offset to the right (European and US buyers get theirs offset the other way!) and the centre console is trimmed in silver and features a drinks cooler that actually works. 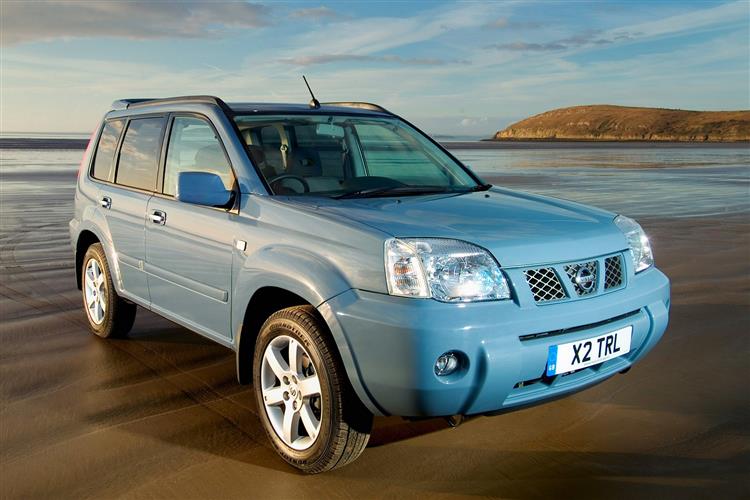