Volvo's C70 is one of the better coupe-convertible cars on the market but it was always hamstrung by a relatively optimistic price from new. Buyers knew that beneath the sleek Swedish exterior lay the underpinnings of a Ford Focus and were often unwilling to stump for the premium Volvo charged. As a used buy, however, the market has a more direct and instant bearing on prices and you can pick up C70s for less than you might imagine, even if you go for the post-2009 facelift version that we're going to concentrate on here. It's a smart pick.

The Volvo C70 is, to most, the curvy car that appeared in 1997 and which stirred passion in the unmentionables in a way that Volvos had rarely done before. If you're a real car fan, then you might even remember the first time you clapped eyes on the original first generation version of this car - a gorgeous thing. Here was a model that delivered Volvo's safety and build quality but in a raffishly good looking shape. It sold well as both a coupe and a convertible but its second generation successor, which appeared back in 2006, had a bit of a tougher time trying to capture the public's imagination. It wasn't for want of trying. This time, the C70 appeared only with a folding hard top that managed to look pretty good when it wasn't in place, but less so with the roof erect. Under the skin, it was basically a Ford Focus CC and that might have had something to do with the way that some buyers found Volvo's asking prices a little on the high side. The Swedish company was pushing the boundaries of its brand equity. Fortunately, it didn't take too long for Gothenburg to formulate a response. In 2009, the C70 range was revised, with the emphasis on distancing this car from its Ford sibling. These are the cars we're focusing on here. The interiors became plusher, the exterior lines a bit sleeker and sales picked up. Volvo then focused on making the engines and running gear more efficient. The C70 soldiered on until 2013 when it was finally and quietly withdrawn.

This post-2009 second generation facelift C70 model has a sleeker look courtesy of front wings redesigned to give the nose a more distinct wedge-shape. Then there are smarter headlamps and larger air intakes to reinforce a stronger on-the-road stance. At the rear, hi-tech LED lamps are more clearly integrated with the oval that frames the rear panel. Otherwise, if you're familiar with the original versions of this MK2 C70, you'll find things much as before. In styling the second generation version of this car, the Swedish design team started with a coupe profile and then set about making a convertible out of it. As a result, with the hood in place, you might not even guess that the C70 is capable of flipping its lid. Thanks to the fact that the Pininfarina-designed roof, which raises or lowers in around 30 seconds at the push of a button, is a three rather than two-piece affair, the rear deck doesn't need to be overly long (the usual giveaway of folding metal roof cars) and the roofline is smooth and beautifully integrated with the rest of the bodywork. At the wheel, owners of older second generation C70 models should notice a much more luxurious and up-market feel in this facelifted version. There's a redesigned instrument panel and softer, more up-market leather trim. Otherwise, the driving position's excellent and the minor controls are nice to use since, due to the harshness of Scandinavian winters, Volvo has designed the switchgear to be easily operable by gloved hands. At its original launch in 2006, this was the only premium-badged folding metal roof convertible that could seat four adults in comfort. Rivals from this era like the Saab 9-3 Convertible and Audi's A4 or A5 Cabriolets have fabric tops - which will have security implications for owners in urban areas: in any case, they aren't quite as spacious for those in the rear. At first glance, the boot capacity of the C70 seems bigger too, at 404-litres with the roof up compared to 352-litres for the Saab and 380-litres for the soft-top Audi A5. With the roof down however, both these two rivals eclipse the Volvo (fabric takes less stowage space of course), the C70 offering just 200-litres, accessible through a narrow gap beneath the load bay divider. Still there's space for a couple of squashy bags and, if we're comparing apples with apples, the other main folding hard-top contender in this sector - BMW's 3 Series Convertible - has pretty much the same amount of restricted luggage space. 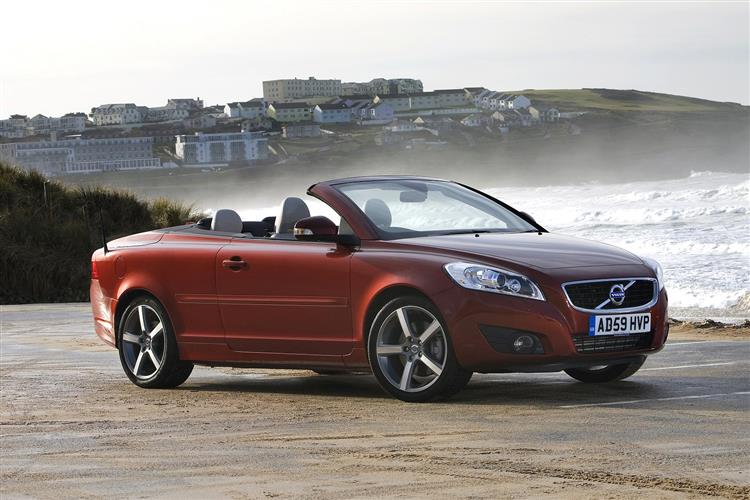