We always knew Renault could build a good hot hatch but few of us foresaw quite how the French company would come to dominate the market with its Clio Renaultsport 200, Twingo Renaultsport 133 and Megane Renaultsport RS250 models. So good were these cars that, for a while, it made no sense to buy anything other than this trio, mopping up sales of sporting hatches right across the board. Here we take the biggest seller of the three, the Clio, and take a look at what's involved in finding a good used example. Don't worry, it's easier than you'd think.

The old Clio II in Renaultsport guise was a cracker, whether you opted for the 172 or the 182. It didn't matter that the interior plastics exuded the greasy sheen of an oiled seabird or that the steering position was better suited to a colobus monkey than a human being: they were just great fun to drive. Therefore we were particularly excited about driving the first sporty model of the Clio IIIs, the 197. What a disappointment. Back in 2006, we wrote that there was the kernel of a great car in there but that the 197 wasn't it. It would take fully four years for that model to arrive. Signs that the 197 was on the right track came in 2007 with the R27 model, a more focused model with better suspension and steering, but the real revelation came in 2009 when the Clio Renaultsport 200 was launched at the Geneva Show. Not everybody thought the frontal styling was an improvement on the admittedly pretty 197, but the car was improved in many other respects. Power had crept up by a mere 3PS but the 200 was available in standard and cheaper (but more hardcore) Cup guises, both of which were very accomplished handlers. Priced at around £1,400 less than a Vauxhall Corsa VXR, the Clio 200 was not only the best hot hatch on the market but also the best value. A Gordini model subsequently appeared in summer 2010 but was a mere cosmetic job with an optimistic price, so failed to cut it with the Clio's hardcore clientele. The Clio 200 was finally replaced in 2012 when the Clio IV appeared, its Renaultsport offering raising eyebrows by being powered by a 1.6-litre turbo engine with no manual gearbox option. That car may well come good, but for a while at least, the Clio 200 was recognised as the high water mark as far as small Renault hot hatches were concerned.

Identifiable by its aerodynamic blade built into the front bumper, front wing air-extractors and a rear diffuser, the Clio 200 featured Renaultsport's styling cues in the form of the Renault i.d. Design Pack: a two-tone colour scheme based on a choice of Gloss Black or Anthracite finish for these trim parts. Buyers chose between the pared back Cup model and the standard car. The Cup chassis was a good deal stiffer which doesn't suit everyone and the standard car also got niceties such as climate control, a Renault hands free keycard, cruise control, a 60/40 split/fold rear seat, front fog lights, curtain airbags, one-touch electric windows, automatic lights and wipers and a reach adjustable steering column. As a pure road car, the non-Cup model is a good deal easier to live with. The Cup offered options such as manual air conditioning (£550), a choice of different wheel designs (Raider, white or black Speedline, all at £175), Recaro seats (£850). You'll find many of these features fitted on used examples you come across. Confusingly, many original Clio 200 customers chose the standard version, but then specified the 'Cup' variant's stiffer chassis as an option. One of the advantages of doing this was that a wider range of options was then available. Things like Carminat TomTom sat nav, the first integrated GPS navigation system priced at just £450. There was also the option of the Renault i.d. exterior pack in anthracite (£150), Renault i.d. interior packs (carbon or yellow, £100) or Renault i.d. leather upholstery (£900). As for cabin space, though none of this revised model's extra length is on offer to passengers, this still remains one of the more spacious cabins in the class and the 288-litre boot is a good size, slightly smaller than, say a Fiesta's with all seats in place, but larger than the rival Ford if you fold them forward to reveal a 1038-litre load bay. 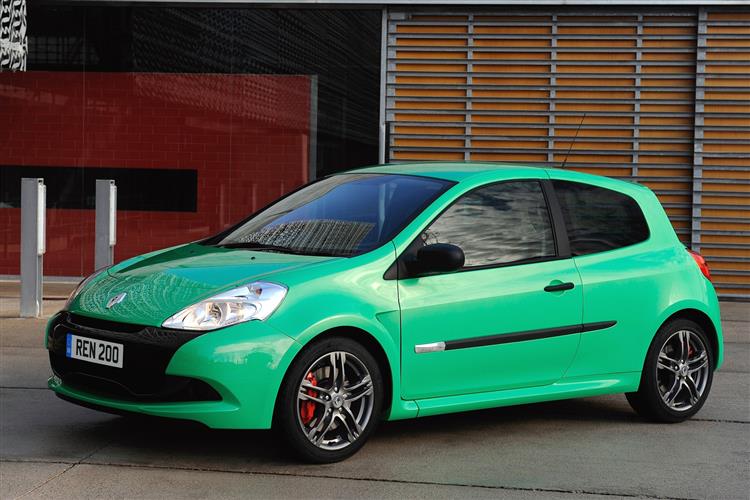