E FOR EXCESS (some text hidden)

The Mercedes-Benz E63 AMG is a car that ought to have been one of the three-pointed star's more esoteric products, an extreme halo model launched into the teeth of a recession that did little more than underscore AMG's excellence in engineering. Somewhat curiously, it didn't turn out like that. It sold in reasonable numbers, customers attracted by the combination of sober-suited E-Class styling paired with an unexpectedly talented chassis and a sledgehammer punch. What started out as a good car morphed into a borderline great one with subsequent revisions. Here's how to shop used for the car that gave BMW's M5 a bloody nose.

Can I be frank here? We'd had hot E-Class models before, most notably the E55 AMG versions of the Nineties, but these were never particularly well resolved cars. The finish was never there and they always felt as if they had too much engine for either their chassis or their braking systems to adequately deal with. You'd get out of one and muse that it would be quite a car when those shortfall issues areas eventually caught up with the excellence of the motive power, but until then your money would certainly be better spent on a BMW M5 or even an Audi S6. All that changed in 2006 when Mercedes launched the E63 AMG. This was based on the facelifted third generation E-Class and featured a revised front bumper, v-shaped grille and revised headlights. Compared to the E55 AMG, it was leagues ahead thanks to under skin changes that improved handling and steering as well as the fitment of the adaptive braking system was borrowed from the S-Class. This car lasted until 2009 when it was replaced by a new E-Class and the E63 AMG continued in this guise, with its muscle car 6208cc engine again providing the drama. This lasted until 2012 when the E63 AMG's engine changed from a naturally aspirated 6.2-litre to a twin-turbo 5.5-litre unit. More power, and lower emissions resulted in a more capable car but that 6.2-litre engine will be remembered as an all-time great. As impressive as the later turbocharged engine is, it feels a little synthetic in comparison.

The E63 AMG was launched at a time when Mercedes was going through one of its periodic spells of excess. We were getting cars like the R63 AMG and such like and amid this filler, the true significance of the hot E-Class was somewhat drowned out. Besides, that engine was also fitted to the smaller C-Class saloon and estate which attracted all the column inches anyway. The V8 made a fantastic noise but could never match the sheer low-end torque of the old supercharged 5.5, so it at first seemed a bit of an odd fit for the E-Class. But then you drove it and revelled in directing 507bhp through the relatively modest 265/35 R18 rear tyres. It was fantastically quick but you really needed to rev the car and to get the most out of it you needed to manually flack away at the gearshift paddles that replaced the useless buttons of the E55. The 2009 E63 AMG, easily distinguished by its square headlights, upped power to 518bhp and torque to 628Nm. This was enough to push the 1840kg E-class to 62mph in 4.5 seconds. You got three-stage adjustable dampers giving you a choice between a smooth and jarring and which most owners left in Comfort mode. The interior finish improved markedly over its predecessor with more metal dash trimmings, a chunky three-spoke steering wheel and grippy leather sports seats, as well as a console of AMG-specific buttons. The big change came in 2012, though, when the 63 AMG was further revised to incorporate the 5.5-litre twin-turbo engine. As before, the list of exterior changes was quite subtle. Perhaps the exhausts are the most overt giveaway, especially if you've chosen the badge delete option, but there are a few other things that you'll need to look out for. Like the 18-inch ten-spoke AMG alloy wheels painted in titanium grey with 360mm brake discs peeking through the spokes. Plus the front wheel arches are 34mm wider with cut outs on the trailing edge. There's an AMG front grille and splitter and high-performance LED headlight units that offer absolutely remarkable night clarity. Flowing light elements within the headlamps ensure that the "four-eyed" look which is typical of the E-Class has been retained. 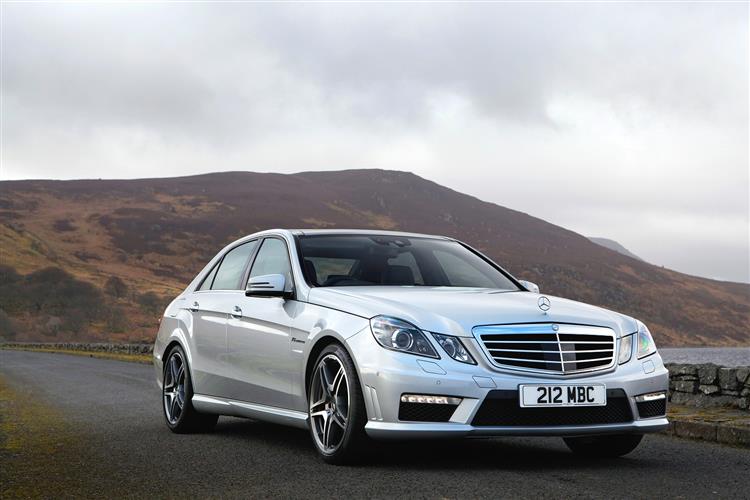