Hyundai once had a seemingly foolproof business plan. It was to sell cars that were a little off the pace in terms of finish and engineering at knockdown prices. Who cared if the car you bought was 10 per cent less competent than the market leader if it was 40 per cent cheaper? Then things changed. Safety legislation and emissions regulations dictated that car companies needed to be right on the mark when it came to these areas and Hyundai's product philosophy changed markedly. Suddenly Hyundais were as good inside as many of their mainstream counterparts and in many ways better. Take a look at the ix35 compact SUV for evidence of this. Sit in one of these and compare it to, say, an early BMW X3 and you'd never think the ix35 was the cheaper car. The ix35 has been one of those sly big sellers in the Hyundai range, sneaking in under the radar of many industry commentators until the sheer number of them on the roads makes them impossible to ignore. Hyundai did a lot right with this car and here's how to snag a great used buy.

Before the ix35 arrived, Hyundai had campaigned with the rather unprepossessing Tucson compact SUV. This was fine as far as a limited utility remit was concerned, but the interior plastics and general air of cost cutting hinted at social thrusting but without the budget to carry it off. The ix35 was cut from very different cloth. First shown in an almost production-ready guise at the 2009 Frankfurt Show, the ix35 ditched the Tucson's setsquare styling for something cuddlier and altogether more crossover-influenced. It became one of Hyundai's biggest sellers, with 58,000 cars finding owners in 2011 as the leisure vehicle market started to bounce back from the worst effects of the recession. The ix35 came in for some updates for the 2013 model year, with a slick 166PS 2.0-litre petrol engine, better steering and updated trim elements such as bi-xenon headlights.

Keen not to scare off school run mums, Hyundai points out that this car, based on their Focus-sized i30 model, is no longer than a Vauxhall Astra family hatch, but that still makes it nearly 4.5 metres long, 10cm longer than a Nissan Qashqai. It certainly feels bigger than an Astra, both on the road and on your driveway, mainly because of its height. Though admittedly shorter than the Tucson it replaced, this ix35's perceived loftiness gives it a bulk and a presence that Crossover buyers will probably rather like. While the coupe-style tapering side windows and roofline will appeal to Focus-segment families looking for something a bit different. At the wheel, you do pay a little for those dramatic exterior lines, the large front and rear corner pillars and the narrow rear windscreen restricting vision a little - which is perhaps why Hyundai thoughtfully includes rear reversing sensors as standard equipment. You quickly adjust to it though, and the large door mirrors help. Everything falls to hand easily and with plenty of adjustment available via both seat and steering wheel, it's straightforward to find your ideal driving position. Fit and finish, despite the general absence of soft-touch plastics, is well judged - the satin-finish mock aluminium looks nice - and it's certainly good enough to match any potential rival this side of £25,000, which is saying a lot for a Hyundai. As for back seat passengers, well once they've adjusted to smaller side windows that come courtesy of the high, rising waistline, they'll be very comfortable as long as they're not overly tall. Large door openings are welcome too, making it easy to lump child seats in and out: this would be a fun family car. No fold-out boot seats of course - it isn't that big - but there is a lot of space on offer - at 591-litres, more than many mini-MPVs can offer. Which makes the size of a pricier rival, such as the original Ford Kuga with its 360-litre boot, look pretty embarrassing. 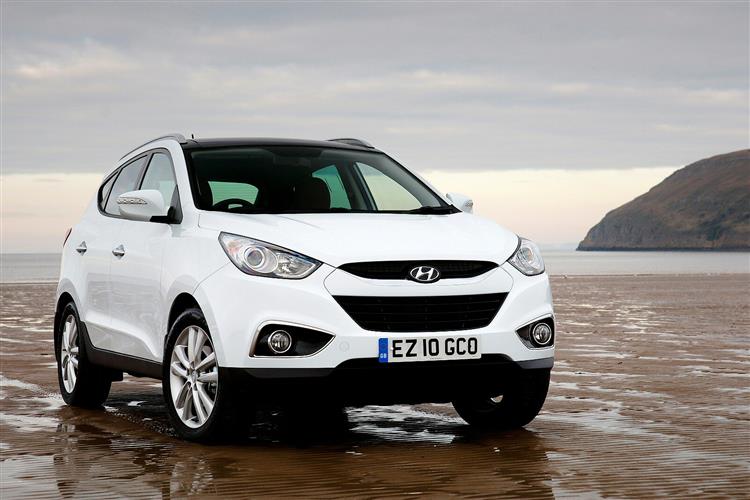