E FOR EFFICIENCY (some text hidden)

The Mercedes-Benz E-Class ought to be the rock on which the company builds its church and in some markets it is, outselling its rivals from BMW and Audi. But the car's image suffered a downturn in the late 1990s and early 2000s. Things started to improve but it wasn't until the introduction of the W212 series, the ninth generation of E-Class in 2009 that things really picked up. This was a car to be proud of, which really took the E-Class's original reputation for solid build quality and refined elegance and established it once again. This is now a great used buy. Here's what to look for.

The first clues as to what the 2009 E-Class would look like appeared a little earlier. The Concept FASCINATION design study of 2008 gave us a clue to its detailing and proportions but it wasn't until January 2009 that we first saw the real thing at the Detroit Show. In 1995, the E-Class was the first Mercedes model to appear with the highly acclaimed twin-headlamp face - a highly symbolic design feature that still characterises the identity of the E-Class. The designers of the W212 E-Class reinterpreted those four "eyes" as rectangles, and this more angular look was mirrored in some of the surfacing, especially in bonnet and boot line. Newly-developed four-cylinder CDI diesel engines suddenly became the prime focus of the E-Class range and the E200 CDI, E220 CDI and E250 CDI units proved popular with customers. The six-cylinder E350 CDI offered both more power and better economy than its predecessor, the E320 CDI. Petrol buyers weren't neglected either, with the E200 CGI and E250 CGI bringing four-cylinder direct injection powerplants into Mercedes dealerships. The first W212 saloon and coupe models arrived in the UK in June 2009, with a five-star EuroNCAP rating being announced in December of that year. The following month saw the introduction of the sleek and rather delightful E-Class estate. 2012 saw the E63 AMG change from a naturally aspirated 6.2-litre V8 to a twin-turbo 5.5-litre unit while at the other extreme, we saw the introduction of the E300 Bluetec Hybrid saloon and estate, the last hurrah of the W212 before it was replaced by a facelifted model in early 2013.

The E-Class featured the usual SE, Avantgarde and Sport trim levels and the exterior proportioning was also familiar, albeit with all of the detailing sharpened up. The interior was a good deal more adventurously styled than its predecessor with brushed aluminium finishes and metal switches for the climate control. Ambient lighting on the upper specification models created a swathe of soft light across the dashboard and doors which gave an agreeably upmarket feel. If you went looking for it, you'd find hard plastics on the lower dashboard but in general, customers seemed happy with the interior build quality. The foot-operated parking brake was still as unpopular as ever. The driving position is brilliant and there's a whole stack of reach adjustment in the steering column. All models got heated seats as well which made all the difference on a winter morning. Opt for a Cabriolet and you could have the world-first AIRCAP draught-stop technology, giving a no-wind-in-the-hair cabriolet feeling. The saloon's boot is large, with a capacity of 540-litres. There's a further 78 litres of stowage under the boot floor which is ideal for keeping useful things out of prying eyes. With a load capacity of up to 1950-litres, the E-Class Estate (length/width/ height: 4895/1854/1471 millimetres) set the standard in its class. 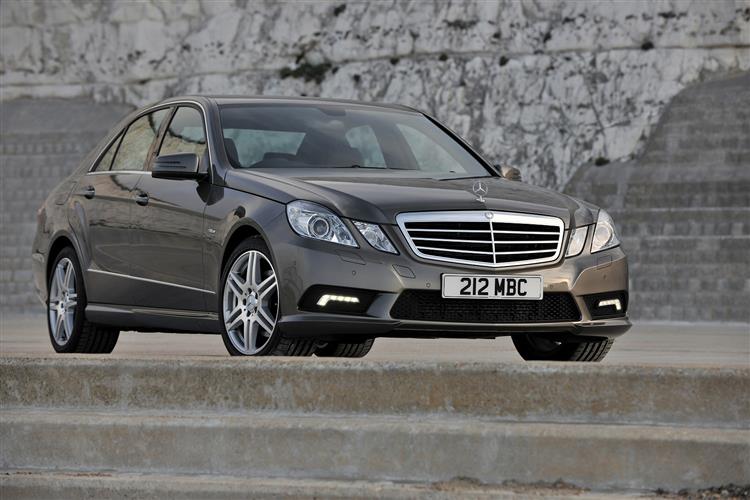