Sometimes, nothing but the biggest and most capable vehicle you can lay your hands on will do and in the absence of a monster truck or a full-blown battle tank, the 'J200'-seriesToyota Land Cruiser V8 comes a pretty close third. Anyone with a penchant for elegance and finesse need not apply. Toyota's monster SUV is a 4x4 from the old school, majoring in size, specification and surmounting insurmountable off-road terrain.

Even when it was launched to replace the Land Cruiser Amazon in 2008, the 'J200'-series Land Cruiser V8 looked like something of an anachronism. This was a huge 4x4 knocking on the door of £56,000 but its uncompromising design was focused on delivering top level off-road ability. There were plenty of luxury SUVs that could match and exceed the price tag of the Land Cruiser V8 but their focus was on comfort, refinement and composure for road driving. Talent for hardcore off-road forays had been bred out of them to a great extent and those that could still cut it in the rough had milder manners on tarmac than the Toyota. The Land Cruiser V8 looked like a 4x4 from a decade previously or one designed for a market where opportunities for serious off-road driving come up a lot more regularly than they do on these shores. It certainly has a stronger following elsewhere in the world but there proved to be enough UK motorists convinced by its abilities to keep sales ticking over. With one engine (a 4.5-litre V8 diesel with an automatic gearbox) and one trim level (a decidedly opulent one), there wasn't a lot of choice available to buyers when the Land Cruiser launched early in 2008. And that's the way things stayed. This car is not to be confused with the smaller 3.0 D-4D diesel Land Cruiser which was sold alongside it and revamped in 2009.

Although the fact will probably be lost on most people the Land Cruiser V8 rumbles past, virtually everything about the car is different from the previous generation Land Cruiser Amazons. Yes, it was still constructed around a ladder-framed chassis, but the frame itself was made massively beefier than before, the body is longer, wider and higher and the interior looks a lot more upmarket. The dashboard is the most obvious change, with a centre-mounted info system that gives it a bit of a top heavy look but which is that rarest of things - comprehensive but genuinely easy to use. What's perhaps a little surprising in a vehicle so huge is that access to the second row of seats isn't great and legroom is slightly compromised by a high floor. The third row of seats are best left to agile kids but it's impossible to fault the folding process which is very slick and can be performed with one hand. Strangely, the smaller Land Cruiser model which was launched in 2009 is probably a more practical car than its bigger brother. Build quality is good but there's not the almost obsessive attention to detail regarding textures, fonts and shapes that you'd get in, say, an Audi Q7. Nevertheless, the Land Cruiser V8 feels as if it would outlast any comparable rival if tasked to drive between two distant points on the globe. Equipment levels are suitably over the top, with four-zone climate control, satellite navigation, adaptive suspension, a rear parking camera, stability control, downhill assist and hill start control. In fact, the options list contained only two items one of which was a JBL stereo upgrade with DVD monitors to entertain the rear seat occupants. 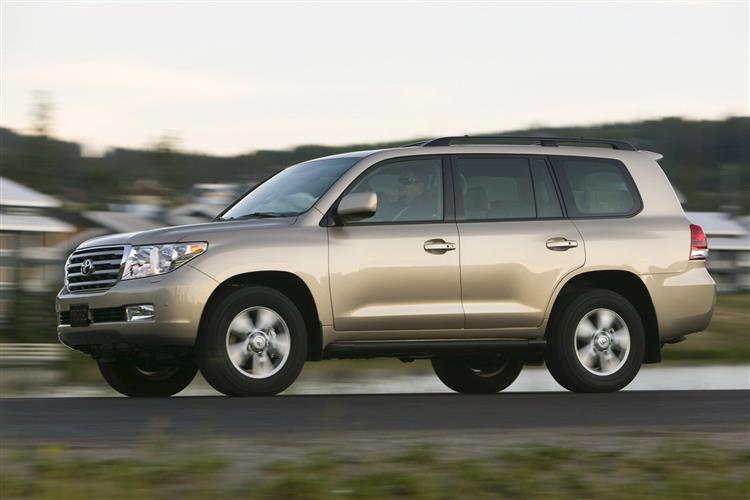