The Mazda6 is a tough car to get a handle on. Why? Because it seems to change its look, its feel and its personality quite markedly from one generation to the next. There's no common theme running through the car's development cycle, with each successive model seemingly conceived by a completely different set of engineers and designers to those that worked on the previous car. As is the case for any such vehicle like this - and Mazda isn't alone in this characteristic - there are good and not so good Mazda6 vintages. The improved MK2 model introduced in 2010 and continuing on sale until the end of 2012 was one of the better iterations. Here's what to look for if you're interested in grabbing a used bargain.

The Mazda6 hasn't had the easiest ride. The first generation car drove brilliantly but felt a bit lightweight and the diesel engines were plagued with reliability issues. The second generation model was an improvement in virtually every regard but seemed to lack its predecessor's personality and fun factor. Mazda had a good look at the second generation model in 2009 and realised that some remedial action was required. The 2010 model year car was the result of this review and it was so much more than a lights, grille and bumpers rehash. The upgraded Mazda6 was given a make-over that featured more aggressive frontal styling, while the engines, suspension and steering were all fine-tuned to improve the quality and refinement of the driving experience. The 6 remained among the best-in-class for CO2 emissions and equipment levels were subtly tweaked as well. A Takuya special edition model was introduced in summer 2010 and got 18-inch alloy wheels, a sports grille and dusk-sensing headlights on the exterior, while the interior benefitted from an alloy pedal set, half-leather heated seats, auto-dimming rear view mirror, dual-zone automatic climate control air conditioning, leather steering wheel and shift knob and a choice of paint colours. This sold well and the Takuya model was reintroduced in 2011. This generation car made way for an all-new Mazda6 at the end of 2012, so used bargains should be easy to find.

Without doing anything too dramatic or innovative to challenge the styling conventions of the medium range market, the Mazda6 is certainly a good-looking car. This improved MK2 version can be identified by even shapelier headlamps, trendy daytime running lights and a more sculpted bumper beneath featuring a trio of large intakes - the outer ones housing the fog lamps within their chromed boarders. The light clusters were also tweaked at the rear and the overall effect is one of simple, modern, uncluttered but clearly Oriental design. Just as a Mazda should be. At the wheel, despite efforts with soft-touch dash-covering, chrome-trimmed instrument dials and various flashes of shiny piano black trim, there isn't an overly premium feel to entry-level 6 models but you do get it further up the range. You might well be able to do without the music notes and the 'hello' message on the digital display that greet you when you get in but otherwise, the driving position is hard to fault, with useful steering wheel-mounted controls for easier access to all the main functions. Back seat room was usefully improved when the original version of this second generation model was introduced, its wider body allowing for greater shoulder room to complement useful knee room improvements. It's still not quite as big as a Mondeo in the back, but then few cars in this class are. Really tall rear seat passengers might feel headroom to be slightly compromised by the sloping roofline, so if that's an issue, buy the estate version. Should you do so, you'll find that the seats-occupied boot capacity rises but not substantially - from 510 to 519-litres. Extension of this space in either bodystyle (to either 1702 or 1751-litres respectively) comes courtesy of Mazda's neat 'karakuri' folding system in which the seat base automatically drops as you fold the seatback forward, though not by quite enough to facilitate a completely flat loading bay. 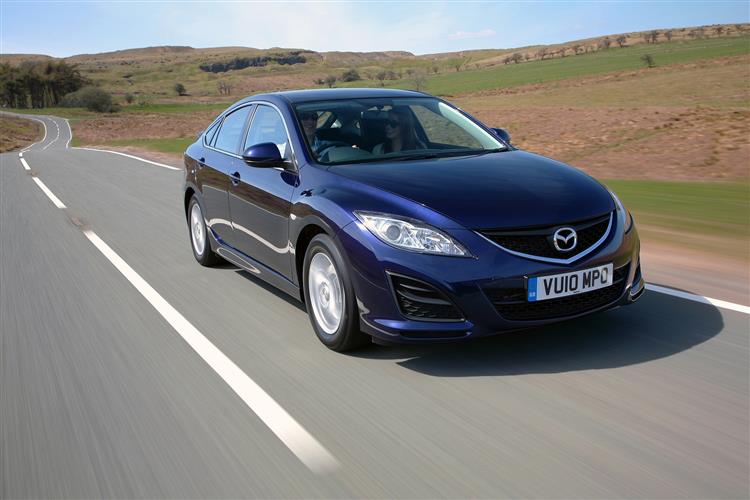