You used to know where you were with family hatchbacks. There was a mainstream five-door version and more red-blooded buyers gravitated towards the sportier three-door. At some point, however, simply calling that racy bodystyle with the three doors the 'three-door' fell out of favour. In recent times we're increasingly seeing these cars branded as 'Sports Coupes', 'Sports Hatches' or as with the Renault Megane, 'Coupes'. At least Renault has put the effort in to justify its more exotic naming strategy. The Megane Coupe looks the business, but is that enough to warrant calling it a coupe? Here's what to look for when buying used.

The Renault Megane Coupe is one of those cars that surprises you when you pause to consider how long it's been on the market. Maybe it's due to the strength of personality of its idiosyncratic predecessor, but this model has been with us since 2008, albeit receiving a fairly thorough make-over in 2012. It made its debut on the show stand of the 2008 Paris Motor Show and was a step-change from the upright, almost wilfully inelegant car that went before. The UK launch was a full-on product assault with no fewer than six engines being offered: three petrol - 1.6-litre VVT 110, 2.0-litre 140 CVT and 2.0-litre TCe 180 - as well as three diesel -1.5-litre dCi 86, 1.5-litre dCi 106 and 1.9-litre dCi 130. The Renaultsport versions, which we cover in a separate used car model guide, arrived in 2009, giving a shot in the arm to the Coupe range. Later that year, Renault launched an i-Music special edition with uprated Arkamys 3D sound 4x30W RDS CD MP3 stereo system with integrated Bluetooth hands free phone kit and a Multi-Functional TunePoint. Rear parking proximity sensors added convenience whilst the 17" 'Sari' alloy wheels, front fog lights and brushed aluminium-effect door mirrors gave the car a bit more visual fizz. In June 2010, Renault revised the trim structure a little, slotting in GT and GT Line models. These got Renaultsport seats and a specific front bumper assembly with a reshaped central air intake incorporating a gloss black centre section that supports the number plate. The fog lamps were housed in profiled, anthracite-coloured recesses on either side of the bumper, black headlamp backgrounds rounding off the look. April 2011 saw the introduction of a special edition high-end Monaco GP limited edition which featured pearlescent Arctic White paint, together with gloss black body components - door mirrors, rear diffuser and fog light surrounds, black headlight masks and "Monaco GP" badging. Two engines were offered; the 1.9 dCi 130 and the recently launched downsized Tce 130, a 1.4-litre powerplant with the torque of a 2.0-litre and the power of a 1.8-litre.

Only the headlamps, bonnet and front wings are carried over from the five-door hatch to the Megane Coupe's exterior and you'll believe that when you see the car. It's certainly an appealing piece of design and one that's well worthy of consideration alongside the market's prettiest hatchbacks and compact coupes. The rear end is particularly admirable with the side window line rising dramatically to a point that meets with that of the curving rear screen above the pumped-up haunches. The downside of this elegant glasswork is poor rear visibility but with a set of parking sensors installed, that should be easy to live with. The Coupe's interior is more sober. The design follows that of the straight-laced Laguna but the Megane also inherits that car's first-rate build quality. The materials are as good as it gets for a family hatchback although some of the buttons are rather small. The only real spark of individuality comes from the digital speedo that dominates the instrument cluster. Space in the rear is OK for a pair of adults but the Coupe's rakish roofline impinges on headroom. At 344-litres, the boot is on the generous side for a car of this kind and usefully shaped. In terms of trim levels, it's a familiar Renault case of Expression, Dynamique, GT or Privilege for Megane Coupe buyers, assuming they can't stretch to Renaultsport R.S. trim. Even the Expression gets 16" alloys, air-conditioning, a trip computer, keyless entry, remote central locking and front fog lights, so it's hardly Spartan. The Dynamique adds automatic wipers and headlamps plus an upgraded stereo, cruise control and tinted windows. Standard kit also includes ESP stability control, ASR Anti-Skid Regulation and a comprehensive collection of airbags in line with Renault's excellent reputation for safety. 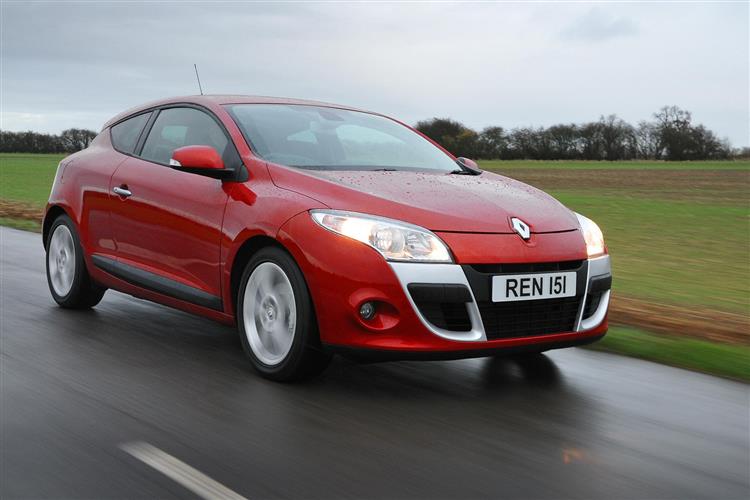