GRAND IN THE HAND (some text hidden)

The seven-seat Renault Grand Scenic is often thought of as a supporting actor to the big-selling five-seat Scenic MPV, but for those who need a little more space than the standard length car can afford, it gets star billing in its own right. Even if you need a vehicle that your family can grow into, buying a used Grand Scenic often doesn't cost a lot more than its more truncated sibling. Years of continual development by Renault and a fundamental understanding of what really counts to users of this class of vehicle has seen the Grand Scenic excel in its class. Here's a primer on what to look for when shopping for a used one.

The long wheelbase Grand Scenic was first introduced with the launch of the Scenic II in 2003, but the cars we're looking at here are specifically based on Scenic III which first appeared at the 2009 Paris Show. Out went that trapezoidal Renault grille and in came a smoother look. Renault tried to do a lot with this car. When a manufacturer introduces a new model, they tend to try to stick to one or two clear themes, but more was expected of this generation Grand Scenic. As well as introducing a new design language to the Scenic sub-brand, this car also packed in a lot more high-technology features, offered a huge choice of engines and delivered far lower emissions. This was also a time when the MPV market was recovering from a fragmentation, as manufacturers chased ever smaller niches. After an initial boom in seven-seat MPV models, there was a renewed interest in five-seat designs and the Grand Scenic was one vehicle whose sales dwindled a little as a result. Although this version only made up around 30 per cent of all Scenic variant sales, the Grand Scenic nevertheless clawed back significant market share for RenauIt against seven-seat rivals. In March 2011, Renault introduced the option of a Bose stereo upgrade for the Dynamique TomTom model. This model Grand Scenic was updated in Autumn 2012 by a car with a number of new engines and refreshed styling. You'll spot these so-called 'Phase2' cars by their revised front end with gloss black and chrome detailing, standard LED daytime running lights and updated rear lights.

Being very nearly the size of a Renault Espace, this Grand Scenic should be big inside and it is. Even so, four and a half metres of length still isn't quite enough to take seven full-sized adults in long distance comfort, even though with a few compromises, you can get close. The seats in the second row slide collectively or individually backwards and forwards, so you can set them to offer good legroom for second or third row passengers, though not both. Mostly then, owners will probably choose to maximise second row legroom and keep the back two seats for kids or adults on short journeys. Talking of kids, the cabin is a triumph of child-friendliness, with seat back tables, door pockets designed for drink bottles and around 40 storage spaces, including front and rear floor cubbies, plus trays under the front seats. And luggage space? Well, as you might expect, there isn't much - just 208 litres - with the third row seating in use, but once you use the easy one-touch motion to fold them flat into the floor, this area can be increased to 564 litres. That's easily enough for, say, a couple of bags of golf clubs and a baby buggy but if you want more yet still need to carry five passengers, you can slide the second seating row forward to create up to 702 litres of space. Going further still requires you to fold the second seating row up against those at the front - sadly, they won't fold flat into the floor. However, if you've space in the garage, you can remove the three chairs completely, to free up a massive 2063-litre space with a load length of around 2.5m. 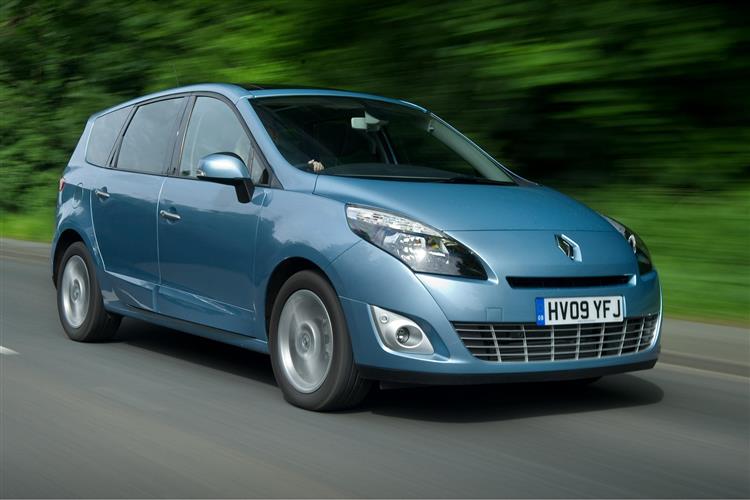