Between 2010 and 2012, Renaultsport monopolised the podium when it came to hot hatches, with a triple-pronged assault that opened with the Twingo, continued with the Clio and reached its apex with their magnificent version of the Megane Coupe. Here was a car with no close rival. Yes, there were hatchbacks that offered more performance, but none blended power and control with quite the same delightful tactility and effectiveness as the Megane Coupe Renaultsport. Here we take a look at the Megane 250, a car that offers strong used value coupled with the ability to embarrass supercars when the going gets twisty.

The Megane 250, as we'll abbreviate it henceforth, had some very big boots to fill. Its predecessor, the Megane Renaultsport R26, was a 230bhp hooligan as home on a race track as on the road. This spawned an even more focused model in 2008, the R26.R, which made just about every other hot hatch instantly seem about as composed and fleet-footed as a Jon Sergeant and Anne Widdecombe paso doble. The thing was, the styling of this generation Megane never found universal acclaim. In fact, many found it plain ugly. Making a prettier Megane was never going to be difficult. Building a Renaultsport model that built on the R26 was a heck of an assignment and when the Megane 250 first appeared, it looked as if it had succumbed to a bit of middle age spread. Yes, the fit and finish of the cabin was noticeably better, but had the power output climbed enough to take account of the additional bulk that went with the extra quality? It seems we needn't have worried. The Megane 250 was even quicker and more capable than its predecessor. Yes, a little of the rawness that made the old R26 so breathtaking had been lost, but most customers who were looking to run their car for 365 days a year would willingly take that trade. The car was sold in both standard form and in a more focused 'Cup' version right through to 2012 when it was replaced by the Megane 265.

What You Getword count: 220

The third generation Renault Megane range is split into hatch and coupe body styles. The five-door hatch models cater to the practicality needs of customers, leaving the three-door coupe free to adopt a sportier approach. Predictably, the Megane Renaultsport 250 is based on the coupe body, inheriting its curving roofline and purposeful stance. The Megane 250 then builds on these basics with its lowered suspension, side sills and accentuated wheel arches stuffed with 18" alloys. The nose has a ground hugging bumper with a suitably vast air-intake but it's probably the rear that shows this Megane in its most dramatic light. Here the curving lines of the side windows and rear screen merge together and a massive central exhaust pipe emerges from the diffuser cut into the bumper. The effect is definitely more coupe than hot hatchback. Interior design and build are increasingly being recognised as Renault strong points and once again, the Megane 250 builds upon the solid foundations of the standard models. Sports seats and an optimally shaped Renaultsport steering wheel complete with thumb grips provide the main connections between car and driver. There are also aluminium pedals and a rev-counter with a gearshift indicator to prompt when the next gear is needed. The headrests, dashboard and rev-counter all carry the Renaultsport logo, just in case you forget. 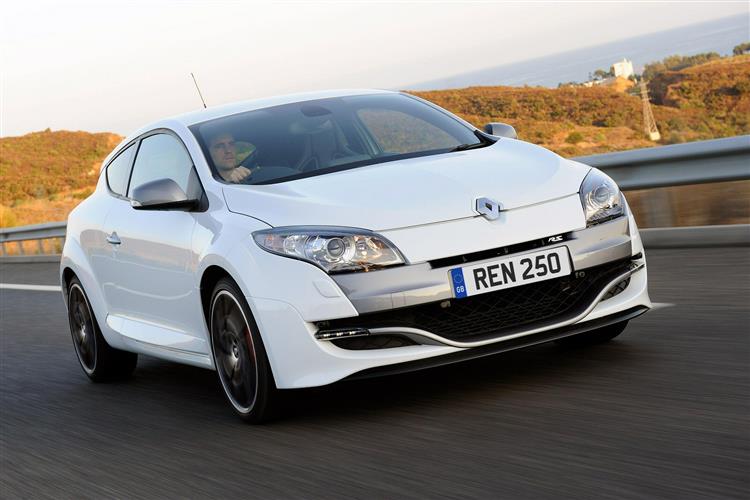