History has been extremely harsh on the Mercedes A-class. Yes, the original model fell over on the infamous 'elk test' but less widely known is that Mercedes then implemented a belt and braces safety provision and the car went on to sell over a million units worldwide. Unfortunately, in making that innovative car ultra-safe, the German giant also made it rather dull to drive. The second generation A-class aimed to add a little sparkle and a more upmarket look and feel. Used examples are some of the most overlooked of all premium vehicles and bargains are out there if you're prepared to do a little detective work.

Few expected a great deal of the all-new Mercedes A-class when it was introduced in Europe in September 2004 and early in 2005 in the UK. This version, dubbed by Mercedes anoraks the W169 as opposed to its predecessor, the W168, wasn't so much a evolution of the old car as a complete root and branch development. A wider range of diesel engines were offered and three-door models also gave the A-class a more dynamic and aspirational image. UK cars started arriving in January 2005 and sales were steady with the unveiling of a turbocharged A200T model giving enthusiast drivers cause to examine the A-class, probably for the first time. In mid-2008, the range was slightly facelifted - and slimmed down to the derivatives that buyers really wanted, mainly the smaller engines. There were now only two petrol options - the A150 with its 1.5-litre 95bhp unit and the A170 with its 1.7-litre lump producing 116bhp. The diesel options were more vocal than the refined petrol units but had extra strength at low revs for launching the A-Class about town. The A160 CDI was an 82bhp 2.0-litre affair while the A180 CDI had that same capacity and 109bhp. Mercedes introduced a package of eco-friendly 'BlueEfficiency' tweaks across the range to try and rival BMW's 'EfficientDynamics' package. This led to improved fuel consumption figures and lower emissions on all models.

What You Getword count: 534

The first and most obvious change over the MK1 version was that Mercedes were offering a three-door version of the A-Class in second generation form, designed to appeal to younger, more sports oriented buyers. Despite the presence of the old A210 Evolution model, nobody could really take the MK1 car seriously as an exemplar of dynamic excellence. The stance of the MK2 car was a good deal more conventional, not to mention purposeful, with a 45mm increase in width and a whopping 232mm increase in length. Its dimensions were now more akin to a regular supermini than its predecessor's tall, short and narrow measurements. Short and long wheelbase models were replaced by a one-size fits all policy, the three and five door cars riding on the same chassis. Despite this more conventional sizing policy, a number of A-Class trademarks were carried over. The second generation car was built on an all-new platform but structural features such as the innovative sandwich floor remained. Owners of the original model wouldn't take long to appreciate the quality advances of this car, once inside it. The dashboard looks like a scaled down version of the E Class fascia - think premium not Palitoy - and was developed with the help of a shiny Berlin customer clinic where everything from materials to switch feel to door slam and indicator sounds were exhaustively tested. Although there are some who claim that customer clinics crush genuine innovation, such an approach has made a difference with this car. That's in stark contrast to the MK1 A-Class, a model that was launched hoping the market would see things its way. Those first generation A-Class models were woefully short of Mercedes Benz look and feel inside, although facelifted variants rectified this to a certain extent. The second-generation car features soft touch fascia surfaces, sleek switchgear, and a glove compartment lid that closes like an Asprey's jewellery box rather than a CD case. About the best compliment you can pay it is that it actually feels like a Mercedes. Although its exterior dimensions are a good deal more sporting than its predecessor, the MK2 A-Class features a host of MPV style interior features. The rear seats may not slide but they tumble forwards to leave a long flat floor and the Easy Vario Plus system allows the cushion of the rear seat to be hidden under the boot floor. As an option, Mercedes also offered passenger seats that could be completely removed, leaving scope for the driver to be alone with a whole lot of fresh air and thus carrying capacity. It's all very clever and means that if the car you're looking at is well specced, you might need to allow a little extra time for the vehicle handover as there's quite a bit to learn. The MK1 model's Classic, Elegance and Avantgarde trim levels were carried over into the MK2 range and air conditioning was standard on all models. A Luxury Climate Control system was offered as an option and uses data recorded by temperature, humidity, sun position and outside pollutant sensors. Other desirable options to look for include xenon headlights and a dash-mounted LCD display linked to Mercedes' excellent COMAND control system. 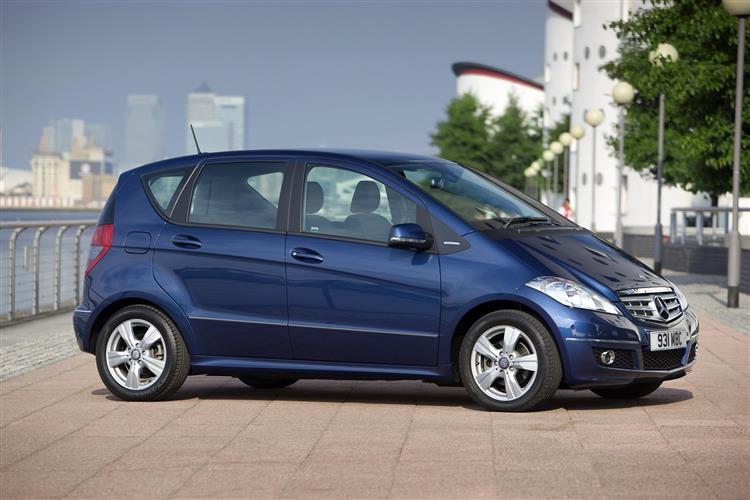