It's wholly unscientific but nevertheless throws up some interesting numbers. If you've got five minutes, fire up the Auto Trader website, limit the search to cars built since 2008 and compare the numbers you get back from the medium range coupe category. You'll find plenty of Sciroccos, quite a few 370Zs and Caymans, but only a few Renault Laguna Coupes. Rather worryingly for Renault, the paltry sales of the coupe were virtually matched by those of the Laguna hatch but that's another story. If you value an element of exclusivity, the Laguna coupe might well pique your interest. But isn't exclusivity just a weaselly way of pitching unpopularity? In effect, yes, but it's worth remembering that some cars make much smarter used buys than new and we suspect that the Renault Laguna Coupe matches that description to the letter. So pay attention, don't turn the page and learn a bit about this rather interesting contender.

Despite that build up, we're not suggesting the sleek Renault is a dynamic competitor for sporty models like the Nissan 370Z or the Volkswagen Scirocco. It's a more laid back thing that campaigns in a corner of the market that has largely been abandoned by most manufacturers. Down the years, we've seen GT coupes like the Subaru SVX, the Mazda MX-6, the Honda Accord Coupe and the Peugeot 407 Coupe all fall rather flat, their lack of a premium badge not helping their cause. By contrast, the likes of the Audi A5, Mercedes CLK and BMW 3 Series Coupe have done just fine. Our first glimpse of what would become the Laguna Coupe was back in September 2007 at the Frankfurt Motor Show. The prototype on display looked a little more production-feasible than most typical show cars and the real thing appeared at the My 2008 Cannes Film Festival, which isn't one of the normal spots on the motoring calendar to unveil a car but which suggested a certain old-school glamour. Most hacks and public had to wait until October 2008 and the Paris Motor Show to get their grubby hands on the Laguna Coupe and it wasn't until January 2009 that the car started to arrive in UK showrooms. Where the rest of the Laguna range was treated to fairly extensive revisions in 2010, the coupe continued unchanged, though the petrol engines were quietly removed from the range. Then in 2012 Renault broke out the red pen and deleted a whole series of slow-selling models completely from their UK line-up. This action included all Lagunas, the Modus, the Kangoo and the Espace amongst others. The lifespan of this pretty car was over.

Compared to the Laguna hatchback, the three-door body of the Coupe model is 5cm shorter and 4cm lower. It's also a massively more rewarding car to look at. The long front overhang of the hatch is retained and from some angles, it makes the Coupe appear slightly ungainly but that's wholly subjective. Employing a classic coupe roof line that falls away to the rear, the Laguna is an elegant proposition. There may even be a hint of Aston Martin about the way the LED tail lights curve around the rear corners and the boot lid lifts to form a narrow lip spoiler. Inside, the impressive interior of the Laguna hatch is carried over with quality soft-touch materials and a neat control layout. The fascia itself is so soft you could lose your keys in it. Those sleek exterior lines are always going to force some compromises in terms of interior practicality but the Laguna Coupe does work as a four seater. Rear seat passengers can be accommodated in reasonable comfort although those over six feet tall may struggle with the headroom. The boot aperture is narrow so inserting large items could be an issue but the space inside is generous with a 423-litre capacity available. The levers mounted on either side of the boot interior drop the 60:40 split rear seats in one movement and raise the available load length from 1m to 1.8m. It's a choice of Dynamique or GT trim for Laguna Coupe buyers. The basic package gets you 18" alloy wheels, an advanced Arkamys 3D sound system, automatic headlamps, rain-sensing wipers, climate control and rear parking sensors. The GT models add the 4Control chassis, keyless entry and start, leather trim and an automatic parking brake. All the Laguna Coupe models get eight airbags, ESP, ASR traction control and CSV understeer control which go a long way to ensuring another polished Renault performance in the NCAP safety tests. 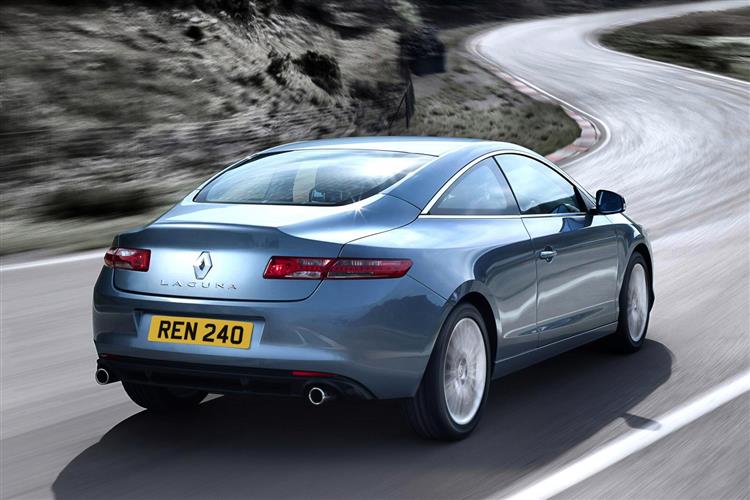