The Renault Kangoo is a car that many of us like to think we have the measure of. If most car buyers were asked to describe it, they'd probably reckon on a van with windows and seats in the back, fairly crude, cheap and rugged. And that would be a perfectly valid description of the Kangoo that was launched in 2004. The version that was launched in 2009, however, was a subtly different thing, although this fact was lost on most potential customers. Instead of being based on a commercial vehicle, the second-generation Kangoo was based on the Renault Scenic MPV, albeit with a taller and more spacious bodyshell. It rode better, it was more practical, more sophisticated and better built. Quite why this was never adequately communicated to the car-buying public is anyone's guess, but it left Renault with a really impressive family car of which nobody knew the backstory. Consider yourself informed now. If you're interested in tracking down a used example, here's what to look for.

Van-based MPV vehicles aren't a new thing in the British market. Between them, the Renault Kangoo, the Citroen Berlingo Multispace and the Peugeot Partner Tepee have attacked the market in a French triple-headed pincer movement but of the three, the Renault has probably been the most appealing. It differentiated itself from its rivals in its first generation guise by offering a neat four-wheel drive variant that rural buyers loved called the Trekka. The original Kangoo was a bit rough and ready but if you needed a car that you didn't feel the need to get too precious about, it was a star performer. Perhaps Renault felt that buyer demands had altered when they finally came round to replacing the original car. The second generation Kangoo was a bigger and more sophisticated vehicle. Instead of riding on old van underpinnings, the Kangoo instead ran on a modified Scenic running gear. The engine choice was also far more appealing. Where the old car was launched with a wheezy 75bhp petrol engine or a 65bhp diesel chugger, the second generation Kangoo debuted with the choice of 90bhp 8-valve and 105bhp 16-valve petrol units. The 1.5-litre diesels were pitched around £1,000-£1,500 over their petrol equivalents. The choice boiled down to 68bhp, 86bhp and 106bhp versions of the common-rail injection dCi engine. The Kangoo continued until early 2012, with Dynamique, Authentique and i-Music models added in late 2009. At the end of 2011 it was announced that Renault would pare its range back to just its very biggest selling models. The Kangoo was quietly deleted from the line up, joining established names like the Laguna, the Modus and the Espace among the retirees.

The supermini-MPVs that retail for around the same amount as this model may look more car-like but they're nothing like as spacious. The Renault's commercial vehicle shape affords masses of room for three rear seat passengers and a monster of a boot lurking just over their shoulders. The high ceiling creates an airy feel to the cabin and the 60:40 split rear seats fold down to create a flat load floor. This can boost the 660-litre boot capacity to an enormous 2,866-litres if you specify your model with a collapsible front passenger seat. There's also 77-litres of additional storage dotted around the cabin in numerous cubbies and compartments. The various fixtures and fittings are sturdily built but the design does lack a little sparkle. The tough plastics of the otherwise impressive dash are sure to stand the test of time. Renault has attempted to give the Kangoo's exterior a personality beyond that of a compact commercial vehicle and while the look is chunky and distinctive, it's clearly van-like. Still, there are positives to that. The sliding side doors for example, that open wide to give easy access to the rear seats. Renault has even engineered electric windows that disappear within these doors when lowered. At the rear, the slab-like tailgate lifts to reveal a flat load floor and a very low loading height so that there's not too far to hoist heavy items. The parcel shelf can be positioned at two different heights and bear a weight of 50kg, so yes, you can stick the dog on it. Cleverly, it can also be slid down against the back of the rear seats so there are no worries about where to store it when it's not in use. Standard equipment across the range includes remote central locking, electric front windows, a CD radio with fingertip controls and 'see-you-home' lights that remain on for a little spell after you park up at night so that you can see to scrabble around in your bag for those elusive front door keys. Safety stuff runs to ABS with electronic brakeforce distribution, plus twin front and side airbags and Isofix child seat attachments for the two outside seats in the rear. 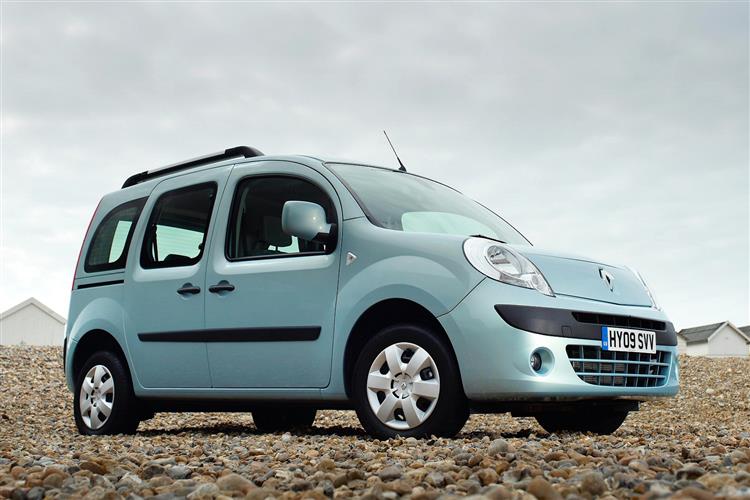