COMETH THE R (some text hidden)

If you thought that BMW's M5 occupied an untouchable niche at the apex of the supersaloon class, chances are you've never driven a Jaguar XFR. Here's a car that can trade punches with BMW's best and in certain key regards, best Munich's finest. It may not be the most politically correct vehicle around but a 5.0-litre supercharged Jaguar XFR might just be one of the most satisfying to own. Here's what to look out for when shopping used.

Prior to the introduction of the Jaguar XFR, the XF's sporting aspirations were upheld by the rather underrated SV8 model, a car that's set to be a very canny used buy in the next few years. The SV8 wasn't a bad car in its own way, powered by a 420bhp supercharged 4.2-litre engine whose roots could be traced back to the old S-TYPE and beyond. It made a great executive express but Jaguar knew that the dynamic potential of the XF's chassis wasn't being extended by this car. The XFR arrived in summer 2009, powered by a 503bhp 5.0-litre V8. It received instant acclaim from all who drove it, with many reviewers placing it above rivals from BMW, Mercedes and Audi. A special edition Stratstone Le Mans limited edition was launched in 2010 to help raise money for the Royal British Legion. This car was available in Polaris White and Midnight Black, and could be identified by a black front grille with a colour-coded grille surround, chrome finish twin bonnet louvres with supercharged script and 20" gloss black wheels with Jaguar R brakes and red centre caps. The XFR continued largely unchanged until 2011 when a series of revisions were announced. Sleeker detailing, especially around the car's front end and a few interior tweaks to boost perceived quality were the key changes.

Any super-saloon must look the part, visually exciting without lapsing into caricature. On that score, this XFR delivers a rather low key approach - at least at first glance. If, after all, you don't like the way the XF looks, then this one is unlikely to change your mind. Yet look a little closer and the detail touches begin to catch your eye. The 'SUPERCHARGED' lettering that encircles the wheel nuts and marks out the twin louvred bonnet air intakes. The deeper front and rear valances, the subtle side sill extensions, the chrome mesh in the front grille and lower air intakes and the chunky chromed rear tailpipes all underscore its purpose. It's the same inside, your initial impression being of a leather-trimmed cabin very like any other well specified XF, though the dark oak veneer trim is specially chosen. But then you look a little closer and notice seats that offer more lateral support and backs embossed with the 'R' logo. Then there's the thicker steering wheel, behind which lie instrument dials with subtle red needles and the 'supercharged' legend, just in case you forget. In the back, as with any XF, that coupe-style sloping roofline will compromise the headroom of the very tallest passengers just as the prominence of the central transmission tunnel will make it difficult to transport three adults for any huge distance. Yet two normal adults will be extremely comfortable here, with plenty of leg and shoulder room. And copious space for their luggage too. The 500-litre boot is one of the largest in the class - and can be extended further to 963 litres by dropping the rear seats. 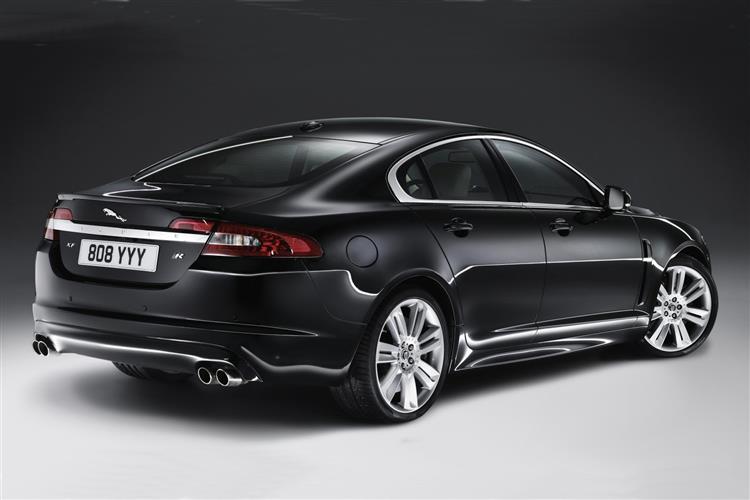