Certain car manufacturers are known for certain kinds of car and Volvo will always be associated with the estate. The Swedish marque's vehicles come in all shapes and sizes but it's big, boxy estate cars of the kind loved by antiques dealers, double bass players and police forces that have come to define the company in many people's eyes. The V70 could, therefore, be described as the archetypal Volvo but if all you're expecting is setsquare styling and a mammoth carrying capacity, you should think again.

We're dealing with the third generation V70 here, the car that emerged in 2007, but Volvo's big estate car dynasty can be traced back a long way prior to that. The original V70 that launched in 1996 was a development of the Volvo 850 and Volvo had also offered estate versions of the 900, 700 and 200 series models. In the 1980s, these were the cars which really forged the firm's reputation for large load-lugers with styling apparently inspired by shipping containers. By 2007, demand for big estates wasn't what it once was. A boom in the popularity of 4x4 vehicles and MPVs had siphoned buyers away from the traditional estate market. That said, the Volvo estates still had a large band of loyal followers to fall back on and this version of the V70 was a significant improvement over its predecessor, particularly in the cabin. The car arrived with a range of powerful engines including a 2.5-litre five-cylinder Turbo, a 3.2 six-cylinder option and the 3.0 turbocharged six-cylinder engine in the all-wheel-drive T6 model. On the diesel side was the 2.4D and the more powerful D5 unit. A short time after the launch, 2.0-litre petrol and diesel engines were added to bring some extra affordability. In 2008, Volvo introduced sporty R-Design versions of the V70 with a series of styling enhancements inside and out. In 2009, DRIVe variants arrived with 1.6-litre diesel engines and modifications to improve economy. The existing diesel engines were also given a power boost at this stage along with better fuel economy and tweaks were made to the styling on all V70 models. For 2010, further enhancements were made to the diesel range with the five-cylinder D3 engine introduced. Trim levels were also rearranged at this time.

Volvo products have been criticised in the past for their boxy styling but this was successfully addressed on the third generation V70. The rear end looks a little more svelte than on previous models but Volvo wasn't diverted from this car's raison d'etre - lugging gear. Lots of it. The clever trick is that Volvo disguised the car's inherent boxiness with neat detailing like the split high-level tail lights. There's a class-competitive 540-litres of virgin space back there and a massive load area can be liberated if you fold the rear seats down and stack your cargo to the roofline. The 40-20-40 three part split/fold rear seat offers 16 different combinations and the loadbay floor itself features aluminium rails and movable anchoring points. A sliding load floor was also offered as an option, as was a powered tailgate. The V70's front is pleasantly curvy in-keeping with models like the S80, C70 and V50 which reinvigorated Volvo's reputation for stylish design. The car's designer cleverly decreased the amount the side glass curves from front to rear, for maximum style at the driving end and maximum carrying ability at the business end. It's unmistakably a Volvo and the look is a long way removed from the lithe, purposeful lines of some Germanic rivals. The V70's prospects were helped by a very competitive list of standard equipment. DSTC dynamic stability and traction control is standard on all cars, as is speed-sensitive power steering with three settings and an intelligent power parking brake that automatically disengages when the accelerator is pressed. There's was also an optional dual-stage integrated rear child booster seat that works in tandem with the V70's extended curtain airbags to provide excellent child safety. 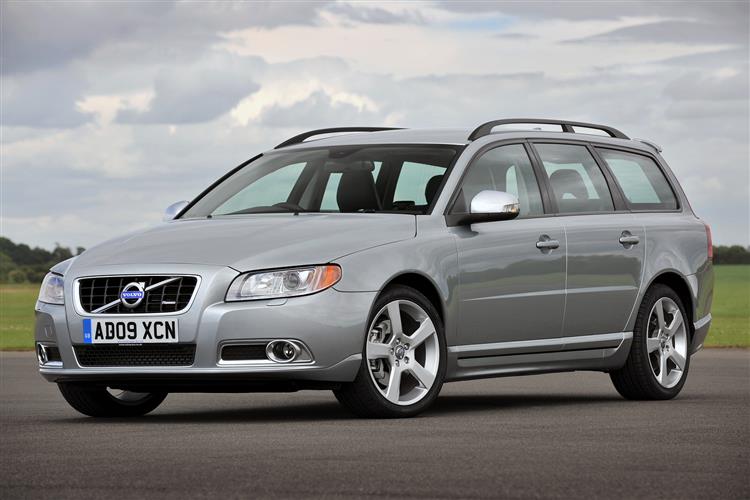