MARKS OUT OF 10 (some text hidden)

There was a transformation at Hyundai in the latter stages of the first decade of the 21st Century. The marque debuted a series of models that broke from its budget brand roots and stood toe to toe with the big names of the European car market's mainstream. Amongst these vehicles came the i10 citycar, a compact, no nonsense solution to the problem of getting about town at a reasonable price. A used i10 might look all the more reasonable but should you choose one ahead of the rest?

The i10 replaced the Amica, a car that was retired from the UK market in 2003 before being brought back from the grave for a 2006 swansong. It wasn't particularly appetising during its first stint and rather like last night's mackerel carbonara, it hadn't improved much the next time we saw it. The i10, however, has proved to be a thoroughly different proposition and came as close to anything as being a no-brainer purchase during the Government's sadly-missed scrappage scheme. Hyundai was at pains to remind us that its i30 family hatchback was designed and is built in Europe around European tastes. The i10 city car is targeting the top performers in its sector in a similar way, except it's screwed together in India. The i10 launched with a 1.1-litre petrol engine but a little over six months later, that unit had been joined by a superior 1.2-litre option. In 2009, the 1.1-litre was deemed superfluous to requirements and axed from the line-up leaving the 1.2 to go it alone with a choice of five-speed manual or four-speed automatic gearboxes. The trim levels were Classic, Comfort and Style in that order of price and plush, with the lower priced versions selling most strongly.

The i10's long wheelbase was been achieved by pushing the wheels right into the corners of the car so as not to increase overall length by too much. At 3,565mm long and 1,595mm wide, the i10 remains usefully compact. It's actually 166mm shorter than the Toyota Aygo and around 25mm longer than a Fiat Panda, so parking shouldn't be too problematic. The exterior design is appealing in an unadventurous kind of way. The city car market was once riddled with non-descript wheeled boxes whereas modern offerings tend to lay on the cheeky style as thick as possible and the i10 resides somewhere between these two camps. The gentle curves around the front end work well and the rear is a little sharper with its angles but the overall shape is neatly integrated. The interior is the area of the i30 hatchback that most impressed observers. Not because it achieved anything particularly new or groundbreaking but because it managed to ape its leading European rivals so effectively. The i10's cabin did the same and again, the design is simple but appealing. The designers have employed a dash-mounted gear-lever but it's mounted on a bit of the dash that extends down so low that cross-cabin access isn't really on the agenda. The rear bench is set-up to take three passengers, unlike the pair of moulded seats you find in the rear of some of its rivals and the i10 is a five-door only model, so practicality should be a strongpoint. Before they lurched up-market, Hyundai products always came with a lot of equipment for the price. However, rather than relying on subtle improvements in quality to break the ice with buyers, the also i10 adhered to its roots with an equipment list that's suitably Korean in length. All models get air-conditioning as standard and not many city cars can say that. There are also four electric windows plus central locking, power steering and a CD stereo with MP3 compatibility. There are four airbags, the bumpers are body coloured and the glass is tinted, not bad for an affordable city runabout. 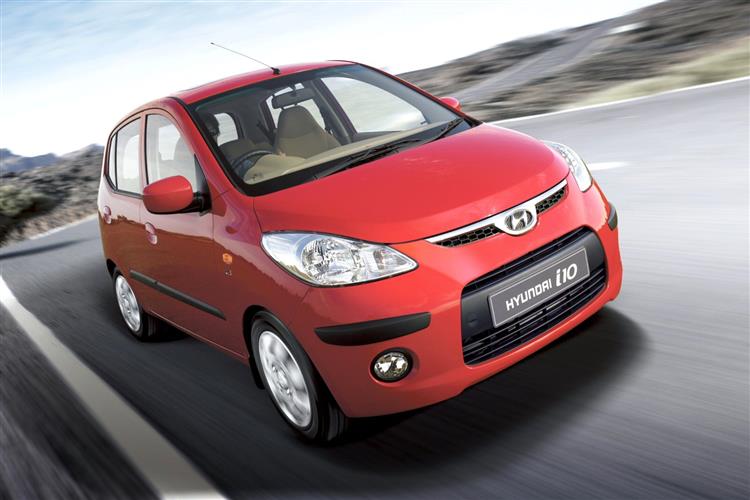