LARGE IT (some text hidden)

Ever since it was first introduced way back in 1992, the Mercedes CL has been a nearly car. It's never been lauded as the finest of the big coupes, boasting neither the effortless suavity of an SL convertible, nor the practicality of the S-Class saloon on which it's based. Examine the motives for this and you'll realise this is largely due to the fact that the S-Class and SL are so good and fit for purpose rather than through any inherent deficiency of the CL. If you want the elegance of a big coupe but prefer a slightly lower key approach than the showier lines of some of its rivals, the Mercedes CL is a very smart pick. What's more, it makes a world more sense as a used buy than a new one.

We're now on the third generation Mercedes CL. The first (the W140) was built between 1992 and 1999 as a vast and rather overengineered behemoth that's best known for being the vehicle that petrolheads tend to trot out when it comes to catastrophic depreciation. The second generation CL (the W215) was a wholly more appealing thing and was on sale between 2000 and 2006. This was the first to get the awesome 612bhp twin-turbo V12 and the 493bhp supercharged V8 engines in AMG trim, both of which now look like used bargains. The car we concern ourselves with here is that model's successor. Dubbed the W216 by Mercedes insiders, it debuted at the 2006 Paris Show to widespread approval. With pumped-up wheelarches and a more curvaceous flow to its flanks, Mercedes had succeeded in giving the CL a more purposeful presence. Two models were initially available, the 4.7-litre V8 CL 500 which was expected to account for the lion's share of CL sales, and the 5.5-litre twin-turbo V12 CL 600. A CL 63 AMG model was soon added, followed by the CL 65 AMG flagship. The CL got a facelift in 2010, with the new car being first shown at the Goodwood Festival of Speed. The lighting system was thoroughly revised and a raft of control systems such as Active Lane Keep Assist and Blind Spot Assist were fitted. The biggest change came in the CL 500's engine which was now a more efficient 4.7-litre unit that wore the Mercedes' BlueEFFICIENCY tag. The CL 600 was reserved for special orders only, but the CL 63 AMG model had already rendered that car obsolete. The 6.2-litre V8 screamer in the CL 63 AMG was replaced by a more efficient 5.5-litre twin turbo unit. The revised 630bhp CL 65 AMG was quietly slotted into the CL range in October 2010 to satisfy those who absolutely needed a torquey V12.

What You Getword count: 435

The W216 generation Mercedes CL might be less visually exuberant than its rivals but it's a far more purposeful proposition than CL models of the past. The distinctive V-shaped radiator grille, more pronounced bonnet profiling and sculpted headlights distinguish the latest facelifted cars but dramatically curving roofline and prominently creased flanks that characterise this CL remain. It's always been a big car but the latest CL models also provide the kind of useful space in the rear seats and boot that hasn't always been offered in previous generation models. At 5,095mm from stem to stern and 1871mm wide, this is a serious piece of automotive real estate. The CL 500 tips the scales at a formidable 2,070kg with the V12-engined CL600 adding over 100kg to that. The CL has been designed as a proper four seater and the additional length built into this car's wheelbase gives it decent rear seat provision for adults. It's the front seats that are the real showstoppers though. Opt for the CL 600 and instead of just the usual heated sports seats, customers get what can only be described as the last word in car seats. Pneumatic lumbar supports and four-way electric adjustment allow for a perfect driving position while active ventilation helps cool your back and posterior on hot days. The best part is the dynamic multicontour facility with massage function that gently mobilises your lumbar vertebrae to prevent lumbago setting in on long journeys. It's not hard to see why the CL weighs as much as it does. It's absolutely stuffed with technology. The bi-xenon headlights not only swivel with the driver's steering inputs to better illuminate the road ahead but they have five lighting modes which are activated according to the driving and weather conditions. Adaptive High Beam Assist detects on-coming traffic at night and dips the full beam, while the optional Night View Assist function shows an infrared image of the road ahead on the dashboard screen, highlighting pedestrians. Active Lane Keeping Assist uses a camera to identify lane markings and warns if the CL leaves its lane unintentionally and Active Blind Sport assist warns of vehicles in the CL's blind spots. The in-car entertainment provision on the CL is also quite something, with all of the functions marshalled by the COMAND control system. There's a Bluetooth phone system as standard and buyers can upgrade to a Harmon Kardon surround sound stereo with DAB digital radio and a 7.2Gb hard disc music server. As part of the package, the Splitview screen allows different content to be viewed on the centre screen by driver and front passenger. 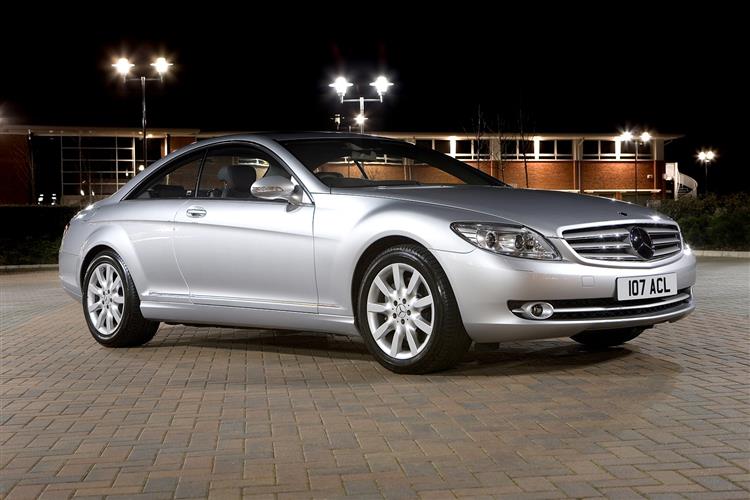